(IRVINE, Calif.) June 22, 2007-In a twist worthy of any great pirate story, Volvo Car Corporation today upped anchor - at least temporarily - on the last crucial leg of its global online treasure hunt: the retrieval of a prize treasure chest filled with $50,000 in gold and a key to a new Volvo from the sea floor. The retrieval of the chest will hang in the balance until controversy dies down over the discovery of real life treasure by Volvo's Hunt partner, Odyssey Marine Exploration.

Earlier this year, Volvo selected Odyssey, the world leader in deep-ocean shipwreck exploration, to sink a treasure chest with one goal: to create an authentic, exciting treasure hunt to promote Disney's ‘Pirates of the Caribbean: At World's End.' Veiled in secrecy, Odyssey scouted locations in the Western Mediterranean, finally zeroing in on a perfect spot off the coast of Gibraltar. They had planned to take the winner of The Hunt, 23-year-old Alena Zvereva from Ekaterinburg, Russia, out to retrieve the treasure from its secret location when the operation hit an unprecedented snag: Odyssey found real treasure. And a media storm ensued.

"We wanted an adventure, and we certainly got one," said Gangeri.  "Real-life shipwreck exploration is uncharted waters for us, and Odyssey did warn us that you never know what will happen out on the high seas. They have been an excellent partner throughout all this, and they helped make this contest one of the most authentic, exciting promotions of the year. Now, pirate story or not, we're putting everything we have toward raising a thrilling - and happy - ending."

About the Hunt
The wildly popular Hunt, a month-long multi-media campaign developed as part of Volvo's promotion of the theatrical release of Disney's Pirates of the Caribbean: At World's End, attracted more than 32,000 online contestants from 22 markets around the world. Participants solved a series of puzzles that led to a semi-final puzzle, Puzzle 21: World's End, posted May 31. The first contestant from each country to submit the correct answer then went on to compete in one final online puzzle to decide the winner. All participating markets were represented in the final with the exception of Italy, who didn't have a participant submit a correct semi-final answer within the time limit.

About Volvo Cars of North America
Volvo has been building cars with Safety in mind for 80 years. The current 2007 model line-up of Volvo Cars includes: the award-winning S40 and its wagon counterpart the V50; the award-winning XC90; the sporty S60 sedan; the all-new S80 luxury sedan; the versatile V70 wagon and rugged XC70 (Cross Country); and the new C70 convertible with the innovative retractable hardtop.

About Odyssey Marine Exploration and "ZEUS."
Odyssey Marine Exploration, Inc. is engaged in the exploration of deep-water shipwrecks and uses innovative methods and state-of-the-art technology to conduct extensive deep-ocean search and recovery operations around the world. The company was founded by industry pioneers John Morris and Greg Stemm. The ZEUS remotely operated vehicle (ROV) is the centerpiece of an advanced robotic archeology system. It is rated to operate at depths to 8,200 feet and is driven by eight powerful hydraulic thrusters. The system's cameras feed high-definition video signals through advanced fiberoptic telemetry to the surface. 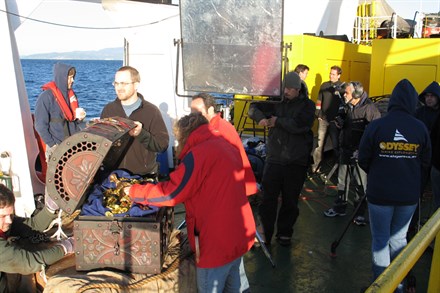 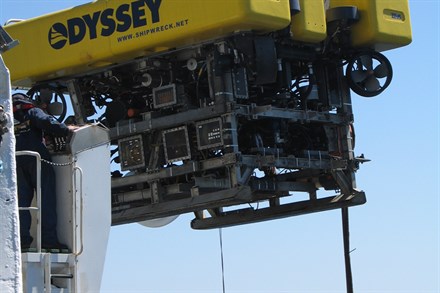