Visiting your Volvo dealer should give you the feeling of coming home, no matter what country you´re in. With the new Volvo Next Face programme, the future interior environment is created at every Volvo dealer and at every motor show around the world.

Volvo Cars has around 2,500 dealers in appr. 120 countries around the world. They sell cars to people with different ethnic origins, of different faiths, different political convictions, cultural and social backgrounds. What they all have in common is that they have chosen a Volvo because they appreciate and share the Volvo values.
Sometimes, however, the dealer experience may vary, depending on who it is and where the dealer is located. Thus, the customer perception of the brand name Volvo can be different because of the surroundings and how the name is exposed. The remedy against that is called Volvo Next Face. The visual and emotional transition which will create a uniform visual identity, give the visitor a feeling of care and openness, has been going on for little more than a year and will be fully implemented everywhere in a few years time.

Uniformity and experience
"Thanks to the fact that all Volvo dealers will have the same visual identity which strongly emphasises our Scandinavian heritage, we will strengthen the Volvo name and our image as a premium brand", says Birgitta Andrén Pihl, Senior Manager, Brand & Product Experience at Volvo Cars and responsible for the Volvo Next Face programme.
The original thoughts behind Volvo Next Face were first put forward by Hans-Olov Olsson, President & CEO at Volvo Cars. Before becoming president of the company, Olsson managed several of the largest Volvo market companies and he has worked closely with Volvo dealers for a good part of his life. He strongly pointed out the importance of having a Volvo car exposed in the same well thought-out way at every dealer as at big international motor shows. It should be obvious through the visual and emotional experience what kind of company Volvo Cars is and what it stands for; the values of the company and how these are transmitted through to the visitor.

The motor show stands, characterised by very creative technical solutions, are what could be called the "haute couture" part of the new programme, while the dealer showrooms constitute the Volvo Cars' everyday environment. And both should be characterised by the same experiences and emotions. A feeling of accessibility, openness and caring thoughts should emanate from Volvo Next Face and create a feeling of well-being and comfort within those who experience it:
"The customer clinics we have made so far have really confirmed that the new concept appeals to existing and new customers alike. Hopefully, all our dealers should feel the same in order to make this programme a valuable contribution to the Volvo Cars business operations", continues Birgitta Andrén Pihl.

Japan the pioneer
The first country to jump at the chance of re-doing the dealers according to the Volvo Next Face ideas was Japan, and do it fast. During work, several good ideas for improvements emerged, contributing to a further refinement of the concept.
The minimalism, light and simplicity of Japanese interior design are in many ways reminiscent of Scandinavian design, which of course is appealing to the Japanese. That is also why the Scandinavian design philosophy has been focused on when creating the Volvo Next Face programme. It is modern, functional and dominated by natural materials:
"The cars have been put in to the centre of an enviroment that rests entirely on our Scandinavian design heritage", says Birgitta Andrén Pihl. "Volvo Next Face is neutral, light and simple, at the same time flexible enough to change when it comes to message, graphics and colours. In the middle of uniform Scandinavianism, there must also be some room for individual possibilities. Therefore, some 20 per cent of the system is possible to market adapt according to needs and requirements, while the rest of it is the same everywhere.

Well thought-out, cost efficient and flexible
With the programme, every Volvo dealer pays for its own expenses. Therefore costs have to be kept at a moderate level in order to make Volvo Next Face attractive. The purpose of the programme is that it should not cost more than the corporate furniture programme that has been on offer until now. The increased sales potential is, of course, a strong incentive. In Japan, where Volvo Next Face was first implemented, sales targets have been substantially raised and the resulting figures speak for themselves. More cars are actually sold in the new showrooms than before. This in turn motivates others to follow.
" There are still many dealers left to be re-done according to Volvo Next Face, but the work is proceeding quickly and it is great to see, says Birgitta Andrén Pihl. Also for me, who have been with the company for many years,  I get the feeling of "coming home" every time I visit a Volvo Next Face showroom. And if I get that feeling, our customers all around the world will hopefully feel the same", she concludes. 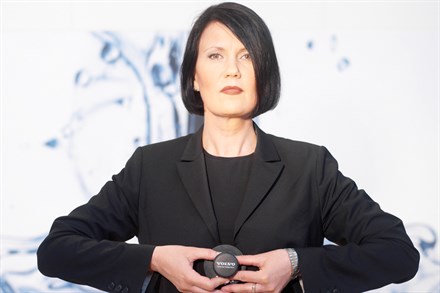