The early years of the seventies were good years for Volvo, with all-time high sales records. Volvo was able to weather the first and second waves of the oil crisis despite the extremely stormy market concitions.

1970
After fourteen years of production, resulting in 667,323 cars, production of the Volvo Amazon, P120, was phased out in conjunction with the summer holidays. The Volvo Amazon was an excellent example of Volvo's philosophy of manufacturing reliable car models capable of being developed, models which can be produced for many years and thereby bear costly investments in safety and quality development.
The changes made to the Volvo 140 in 1970 were minor - a newly-designed grille with a diagonal bar. During the year Volvo passed the 2 million car production mark.

1971
New wind in the company's sails. Sales rose for the 20th year in succession and a total of 214,000 cars were produced. In Scandinavia Volvo became the biggest car make and in Great Britain sales rose by almost 50 per cent.
The most powerful standard car Volvo had ever produced was presented - the Volvo 164 E. The engine had electronic fuel injection and developed 175 hp. A new version of the 1800 was also introduced in 1971. The accentuated fastback profile underlined the sporty nature of the car and resulted in a large boot into the bargain. This model was known as the 1800 ES.
Pehr G Gyllenhammar succeeded Gunnar Engellau as Group President. Employees were represented on the board of the company.

1972
"We need to add a smaller car" was a frequent request from Volvo's dealers. This was one of Volvo's main reasons for acquiring 33% of the shares in DAF's car operations in Holland. Another reason was that Volvo wanted a strong foothold in the European Community.
In 1972 Volvo presented a safety vehicle - the VESC, Volvo Experimental Safety Car. An experimental car, but also one which looked towards the future.
The VESC was a mobile laboratory in which various components designed to improve safety - such as anti-locking brakes, airbags, tele-scopic bumpers - could be tested. A great deal of the experience acquired from the VESC project was later applied to the 240/260 Series. In 1972 VTC, the Volvo Technical Centre, was opened.

1973
Production was in full swing when the first oil crisis appeared on the horizon. The production rate was the highest in the company's history. The US became Volvo's largest market ahead of Sweden. Few people could have imagined that an international economic recession was just around the corner.
Larger bumpers were fitted higher up on this year's models to comply with US standards. The biggest changes were made inside the car, however. They included a new dashboard on which the most important instruments were grouped in front of the driver. The steering wheel was smaller and featured a rectangular safety cushion.

1974
A new generation of Volvo cars was presented: the Volvo 240 with six different models and the Volvo 260 with two models.
These cars had a new front, inspired by the VESC. The dashboard had been modified. The 240 Series was equipped with a new B21engine with an overhead cam-shaft. The 260 Series also had a new engine, a V6. The new 6-cylinder engine, the B27, was the first result of Volvo's joint venture with Renault and Peugeot for the development of car engines. The joint venture had begun in 1971.
The introduction of the 240/260 Series took Volvo to a leading position among the world's car manufacturers when it came to safety.
On February 8th Volvo's car plant in Kalmar was completed. It had an unconventional design and from above it looked like a star. The Kalmar Plant received a great deal of attention because of its production process including automatic carriers which transported the car bodies and its working organisation made up of small teams of workers.

1975
During 1975 two new cars were presented: the Volvo 265 and the Volvo 66. The 265 was an exclusive estate with a 6-cylinder engine and excellent comfort.
The Volvo 66 enabled Volvo to enter the small car segment. The 66 was a development of the DAF 66, a pleasant town car equipped with continuously variable transmission the so called Variomatic. It was produced in Holland by DAF, which changed its name during the year to Volvo Car B.V.
The Swedish Automobile Association presented Volvo with a gold medal for safety features, including day-running lights and the master brake cylinder with the stepped bore.

1976
The US traffic safety administration (NHTSA) purchased a number of Volvo 240s, which were used to set the safety standards against which all new cars on the US market were tested.
The Volvo 343 from Holland made its appearance. This was a completely newly developed car from Volvo Car B.V. With the Volvo 343 Volvo took up the gauntlet on the tough but growing market for mid-range cars. The first model was equipped with a 1.4 litre engine and continuously variable transmission.
Despite its compact outer dimensions, this car offered plenty of interior space. The large rear hatch and the folding seats meant that effective use could be made of the space for passengers and luggage alike.
In Sweden, Volvo introduced a new type of service warranty - VSG - which protected customers from unexpected costs in conjunction with service and repairs during the first three years of the life of the car.

1977
Volvo celebrated its 50th anniversary and commemorated the occasion with a special 240 model. This car had silver metallic paintwork with special black and gold decor mouldings. The Volvo 262 Coupe was also presented during the year.
This was an extremely exclusive model, which was built by the Italian coachwork designer Bertone. The seats were made of leather and the car was equipped with air conditioning, power windows, rearview mirrors and radio aerial.
The engine was the same as the one in the other 260 models, a 140 hp B27 engine with six cylinders in a V shape. The proposed merger between Volvo and Saab-Scania was the most discussed business deal of the year. Volvo eventually withdrew the suggestion, as the management of Saab-Scania was not interested in the idea.

1978
At the start of the 1970s car operations at Volvo had been given greater independence. Another step was now taken in the same direction by reorganising Volvo Cars into a subsidiary, the Volvo Car Corporation, with Håkan Frisinger as President.
For the first time, car sales passed the 10,000 million SEK mark and accounted for around 54% of the Volvo Group's total turnover.
A number of exterior improvements, new versions and even better driving characteristics were presented in the new 1979 models. A 343 model with a manual gearbox was also introduced. The really big news, however, was the 6-cylinder diesel engine (from Volkswagen) which Volvo began marketing in 1979.
In 1978 the Volvo management presented a proposal for a comprehensive joint venture agreement with Norway.
After the rejection of a possible deal by the majority of Volvo shareholders, the Volvo management decided not to pursue the agreement.

1979
During the year Volvo stepped up production by almost 25% and more than 310,000 cars were sold; this included Volvo's four-millionth car.
French Renault and Volvo signed an agreement involving industrial co-operation, research and product development. For a few years, Renault was also a minority shareholder in the Volvo Car Corporation.
The 1980 car models were presented in August and were given a good reception by the market. In addition to the 6-cylinder diesel, the new 240 models for the year included a GLT with a 140 hp, 4-cylinder engine. In the 340 Series a five-door hatchback - the Volvo 345 with a 70 hp engine - was introduced.
After a decade of problems Volvo had drawn up the guidelines for an aggressive product development programme aimed at the 1980s. 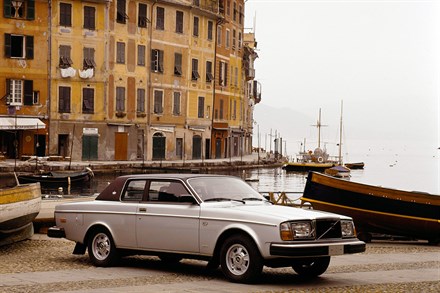 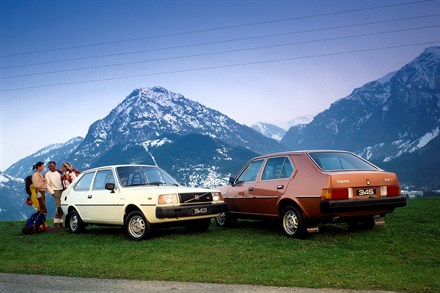