To function is added form -the streamlined PV36

1930
Following the positive reception given to the PV651 by the taxi market, the time was now ripe for the introduction of a larger taxi. In March Volvo's first two 7-seater models, the TR671and TR672, were introduced. TR showed that this was a transport vehicle. The chassis, which was the same as the one used on the PV650/651, was extended. From now on a difference was made between the model designations of Volvo's passenger cars and taxis.
The sedans were part of the PV650 Series, where the numbers indicated that this was five seated a 6-cylinder car. The taxis were included in the TR670 Series, where the numbers indicated that there was room for 7 seats.
In August a new passenger car, the PV652, a more exclusive version of the PV651, was introduced. Inside, the instrumentation and the front seats were different. Outside, the rear wings were longer and the round shape of the rear screen was more accentuated. The most important difference was to be found in the brake system, where hydraulic brakes were installed. The price of this car was 6,900 Swedish kronor.
In 1930 Volvo bought its engine supplier, Pentaverken in Skövde. The company also purchased the plant on Hisingen, which had been owned until then by SKF. Volvo now had several hundred employees.

1931
Car sales in Sweden fell as a result of the international economic crisis. Even so, Volvo maintained its market share of 8%. General Motors, who had an assembly plant for the Chevrolet in Stockholm, accused Volvo of not manufacturing a Swedish product. Volvo then worked out that an average of 90% of the sales value stayed within the country. From this time Volvo began advertising their cars as "the Swedish cars". During the year the TR673 and TR674, which were a development of the previous TR models and had features including a longer, wider body, were introduced. Volvo paid a dividend to its shareholders for the first time.

1932
In January some important changes were made to the car models. The engine displacement was increased to 3,366 cc, which resulted in an output of 65 hp at 3200 rpm. The gearbox was changed from a 4-speed to a 3-speed, but with synchronisation on second and third gears plus a free-wheel. The idea was to reduce fuel consumption by as much as 20% when cruising. By May Volvo had delivered 10,000 vehicles since the start in 1927. Of these, 3,800 were cars (1,000 4-cylinder models and 2,800 6-cylinder versions) and 6,200 were trucks.

IN 1932 IVAN ÖRNBERG WAS BROUGHT IN TO BREATHE FRESH LIFE INTO VOLVO'S CAR MODELS. ÖRNBERG HAD SPENT HIS WHOLE LIFE WORKING IN THE US AUTOMOBILE INDUSTRY BEFORE ASSAR GABRIELSSON PERSUADED HIM TO RETURN TO SWEDEN AND VOLVO.
HE STARTED WORK AS TECHNICAL DIRECTOR FOR CARS IN 1932. HIS US EXPERIENCE QUICKLY MADE ITSELF FELT IN THE SHAPE OF A NEW ENGINE, WHICH WAS USED IN THE 1935 MODELS. THE PV36, THE CARIOCA, WAS ÖRNBERG'S WORK.

1933
In August the new PV653 (standard) and PV654 (de Luxe) models were presented. The chassis closely resembled the PV651/652, but following the US design model it had been reinforced by a cross-member at the centre. The body was now made entirely of metal for the first time. It was also possible to choose between wooden or steelspoke wheels, both of which could be detached. The rims were smaller, 17" compared with the previous 19", which gave the car a more modern appearance. The instruments were grouped together in front of the driver and a glove compartment with a lid was introduced as a new feature. The engine was suspended at five points and was insulated from the chassis by rubber. A great deal of work went into creating a quiet vehicle; for example, the wall between the engine and the passenger compartment was fitted with noise insulation. A downdraught carburettor with an air filter and an intake silencer was another important new feature. Engine output was the same as before. When it came to the exterior, it was easy to see the difference between the two models, as the luxury versions had special tail-lights and a double horn.

1934
In the spring a new series of 7-seater taxis, the TR675-679 which closely resembled the PV653/654 in appear-ance, was introduced. These models were also sold as chassis with different equip-ment on two wheelbases of different lengths.
The sales target for 1934 was 3,000 cars and it was almost reached. Sales for the year totalled 2,984 cars, 775 of which were sold abroad.

1935
A great deal happened at Volvo during 1935. The big news was the PV36, "the streamlined car".
The PV36 was clearly inspired by US designs. The engine was the same as the one fitted in the "conservative" models,
but the gearbox had no freewheel. The car had a split windscreen, cover plates over the rear wheels, an integrated luggage compartment and a roomy passenger compartment. It weighed 1,660 kg.
A great deal of work had been put into making the car comfortable and the rear seat was wider than the one in previous models. The car was a 6-seater-three at the front and three at the rear.
The PV36 was intended to be a relatively expensive luxury model. It cost 8,500 Swedish kronor. A series of just 500 cars was therefore planned and this proved to be correct as it took a long time to sell them. The PV36 was nicknamed the Carioca, perhaps because the Carioca was a South-American dance that was in fashion at the time.
The PV658/659, the successor to the PV653/654, was also introduced in 1935. The bonnet had been modified and a "grille" had been fitted in front of the radiator for the first time.
New taxi models, the TR701-704, were also presented. The exterior changes were relatively small, but the engine was larger and developed more than 80 hp.
In 1935 Volvo shares were floated on the Stockholm Stock Exchange.

1936
A less complex, cheaper model had been developed alongside the PV36. It was called the PV51 and was greeted with tremendous interest. Although it was more expensive than the majority of rival makes in its class, customers were still prepared to pay a few hundred kronor more for this, the first "people's car", which also carried a name people associated with quality - Volvo.
The PV51 did not have the same extreme lines as the PV36, but its character was the same. The body was narrower, with a flat undivided windscreen. The rear section and the doors were virtually identical to those on the PV36 and the spare wheel was still in the luggage compartment.
The engine was also the same, with an output of 86 hp. Together with the weight of 1,500 kg this made the PV51 much faster than earlier models. In certain areas the PV51 had been simplified to a point that was barely acceptable, however. It had just one windscreen wiper, no armrests and cheap quality upholstery, for example.
Even so, the price - 5,800 Swedish kronor - attracted many customers and sales went well.

1937
The beginning of the year saw the introduction of the PV52, which was better equipped than the PV51. It had double sun visors, two windscreen wipers, an electric clock, a sprung steering wheel, a heater with a defroster function, a loud horn, folding backrests, a reading lamp in the rear seat and armrests in all the doors.
1937 was yet another record year for Volvo. The production figures rose to 1,804 cars; this included the 25,000th vehicle since the start, a PV52.

1938
The PV 51 Special was presented in March, followed by the PV52 Special. The new colours light-blue, maroon red, light-green and black were introduced, together with several different choices of interior.
1938 was the first year that Volvo presented its new models in the autumn. This was what the Americans did, and Volvo wanted to prove that they had "caught up".
The new models this year were the PV53 and the PV54 standard versions and the PV55 and PV56 de Luxe versions.
The front end had a narrower bonnet and sharper grille design. The headlamps were longer and the radiator mascot also doubled as a bonnet handle.
A horizontal speedometer was included for the first time.
For taxi owners, the PV801 (with interior screen) and the PV802 (without interior screen) were presented.
This model was also available in a chassis version (PV810), then with a larger wheel base.
The body had rounded lines and a modern wedge-shaped front.
Both versions had eight seats (driver and seven passengers, three of them on folding seats).

1939
With the onset of the Second World War, fuel shortages became acute. One alernative to petrol was producer-gas, which was made of charcoal.
Volvo had already started manufacturing producer-gas units by the spring of this year, which meant a head start over the competition.
Sales got under way about six weeks before other manufacturers.
Volvo management decided during the year to start manufacture of a new car to replace the PV53-56. Preliminary plans were ready by September, but series manufacture did not materialize since the start of the war put a stop to private motoring. 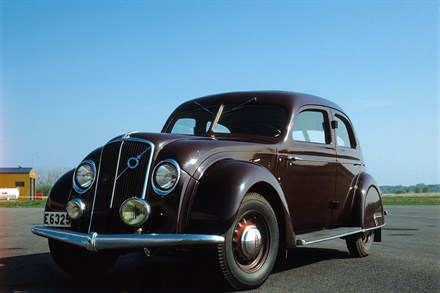 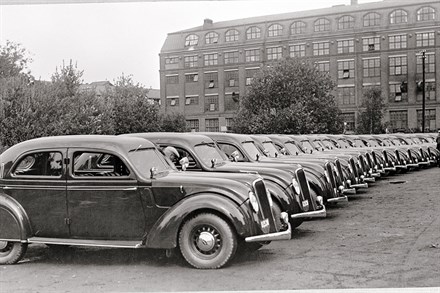