2007 marked the beginning of what has proven to be a highly successful project at Volvo Car Corporation. Engineers faced the challenge of developing cars that would meet the levels required for government incentives of below 120 g/km of CO2 emissions. The team at Volvo Car was convinced that it was possible to achieve efficiencies to bring the Volvo cars to the same emission levels as in smaller sized vehicles.

So far, Volvo Car has presented two generations of the so called DRIVe range - models that are extremely fuel efficient with low environmental impact. And today, as a testament to the projects success, the S40 DRIVe has been awarded the prestigious What car? Green car of the year.

"Our target was set right at the beginning - we were going to do better than 120 grams, and we were going to do it without compromising the way the cars behaved. And that's what we've done," says Ulf Nordström, Industrial Project Leader for the DRIVe- initiative.

The project was given high priority by the executive management at Volvo Car Corporation and resources were available to quickly move from planning to testing and development.

No part of the car was left un-scrutinized when the project started working from an existing C30 with a 1.6-litre diesel engine. Aerodynamics, the powertrain, parasitic losses - all areas had to be looked into. The team started experimenting with modified spoilers, design changes to the front and rear of the car, and introducing underbody panels to improve the air flow. The chassi was lowered by around ten millimeters and air intake from the grill was reduced.

"The engineers in the aerodynamics group were incredible. They were given hammers and aluminium profiles and let loose to do what it took to get results," says Ulf Nordström.

Throughout the project, it was important to the team that handling and performance should not have to be sacrificed for lower emission levels.

Customers should be able to have a car that was highly efficient, with low impact on the environment and still fun to drive. In the end, many of the test-drives reported better acceleration, improved road-handling and higher comfort.

During the process that led to the first launch of the C30, S40 and V50 DRIVe, the project team became convinced that it would be possible to improve results even further. In March 2009, at Geneva Motor Show, the next step was presented with the cars reaching emission levels of 104g/km through added Stop/Start technique and regenerative charge.

The second generation of S40 DRIVe is the car that has now been awarded with the Environmental Car of the year award from What Car?.

The project of improving conventional powertrains is part of delivering Volvo Car ambitious roadmap in reducing CO2-emissions. The vision is to work towards a future that is entirely emissions free.

"This is an important step of the journey to reach the targets we have set in CO2 reductions and we will continue to look for improvements on our existing combustion engines. Combined with our electrification plans and the launch of the plug-in hybrid in 2012, Volvo Car will be at the forefront in environmental care," says Peter Ewerstrand, CO2 Director. 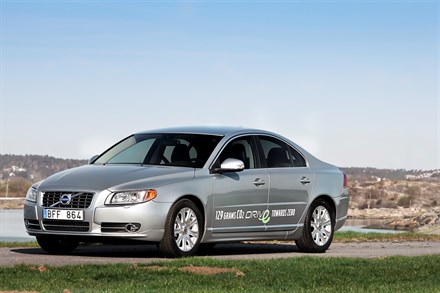