The Volvo XC90 was launched in early 2002 as the first purpose-built SUV (Sports Utility Vehicle) to come from Volvo Car. It is also Volvo's first seven-seat car since the 1940s. The Volvo XC90 has electronically controlled All-Wheel Drive. It has the capacity to forge ahead on very poor roads, but is primarily intended as a spacious passenger car with excellent driving manners, immense safety and intelligent versatility.

The following colours will be available for the Volvo XC90:

Volvo Car adopts a holistic view of safety that encompasses both Preventive and Protective safety. Preventive safety is closely linked to the car's driving properties. The body of the Volvo XC90 features immense torsional rigidity and the car has a sturdy chassis, a combination that results in consistent, predictable behaviour on the road (see also under "Powertrain and Chassis"). Ground clearance is high to offer good get-you-there ability on poor roads. Despite this, the floor is set low down, which contributes to the car's low centre of gravity and excellent directional stability.

Volvo Car has developed various information systems designed to help the driver while on the move. One such system is IDIS (Intelligent Driver Information System), which for instance delays incoming phone calls in complex traffic situations that require the driver's undivided attention.

Active Bending Light - moving headlamp beams that follow the curvature of the road - help maintain the best possible visibility in the dark on twisting roads.

The interior safety systems aim to keep the passengers securely in place and also to reduce the risk of serious injury. In order to provide the most effective protection possible, Volvo Car has developed a number of in-house systems, such as WHIPS (Whiplash Protection System), SIPS (Side Impact Protection System) and IC (Inflatable Curtain). All are fitted as standard in the Volvo XC90. Certain components have undergone further development specifically for the XC90 model. For instance, the Inflatable Curtain has been extended so it also covers passengers in the third row of seats. All seven seats are equipped with three-point inertia-reel seat belts, belt pre-tensioners and head restraints. The highest possible safety requires that all the car's occupants always use their seat belts.

The Volvo XC90 can be equipped with the HomeLink system. The system makes it possible to operate up to three remote controlled home devices (e.g., garage door, home alarm system, etc.) via a module integrated into the sun visor. HomeLink contributes to easy and safe access to your home.

The Volvo XC90 was launched with a range of five- and six-cylinder engines. All are fitted transversely in keeping with Volvo's modern powertrain concept. They are designed to operate smoothly, with low vibration and high torque across a wide rev range.

An in-line six-cylinder, normally aspirated engine was launched in 2006. The engine is extremely compact and mounted transversely, for optimum crash safety and maximum cabin space.

The engine programme for the Volvo XC90 looks as follows: 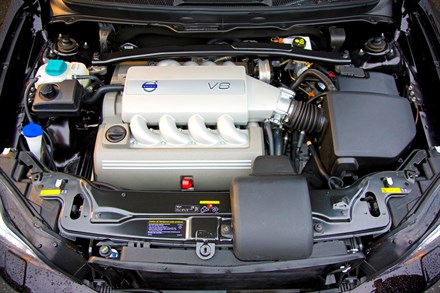