The remote control unit has evolved into a portable communication centre which interacts intelligently with the car to help enhance security and comfort.

The VPC has been developed in collaboration between Volvo Cars, the Ford Research Laboratory, Siemens and the Swedish companies Fingerprint Cards AB and Combitech Systems ABand Hampf Industrial Design AB and it marks the evolution of the remote control unit into a keyless vehicle system. The system makes it possible to unlock and start the car, for instance, without the need to activate the remote control unit.

All the driver has to do to unlock the door is to grasp the door handle. The car sends a signal to the VPC which the driver is carrying. The VPC transmits the remote control unit’s identity code – and, if this is correct, the door is unlocked.

At the same time as the car is unlocked, two-way communication is started between the VPC and the car, after which the car settings are automatically adjusted to match the driver’s predetermined requirements.

The technology also permits passive starting without a key. The driver only needs to turn a rotary control to start the engine.

The foremost benefit is that the time between unlocking the car and driving off is shorter – offering increased personal security if the car is parked in an unpleasant environment.

The VPC is personalised via a built-in fingerprint sensor. After that, it can be programmed with a variety of personal settings – for example, if only the driver’s door or additional doors should be unlocked, individual settings for the driver’s seat, steering wheel, pedals, rear-view mirrors and so on.

The VPC can also be pre-programmed with different destinations so that the driver does not need to set the navigation system before driving off – the settings are already completed when the door is unlocked.

The Volvo Personal Communicator has even more areas of use, however. Here are a few examples.

Personal settings can be pre-programmed in the car or in the VPC, making it possible to change them from a distance.

The identity of the VPC unit is changed if another authorised user presses his or her finger against the fingerprint sensor. The settings are then altered to suit the parameters selected by this particular user, which makes it possible for several persons in a family to use the same VPC unit. This brings benefits in terms of both safety and comfort.

Volvo has chosen to place the fingerprint sensor in the remote control unit so as to separate the driver physically from the car while still offering full functionality. The fingerprint sensor is therefore not connected to unlocking or starting the car. This minimises the risk of hostage-taking in an attempted theft. In a threatening situation, all the driver has to do is to hand over the remote control, which then functions like a conventional car key.

The VPC can also be placed in a set-up offering limited functionality – so-called valet mode. In this mode, no personal settings are transferred to the car. Instead, the car adopts a standard set-up, at the same time as the luggage compartment and glove compartment remain locked. However, the car itself can still be unlocked, started and driven. Practical and secure when handing over the car to a hotel valet parking service or the workshop for service.

The heartbeat sensor registers the vibration of a beating heart – both human and animal. The sensor is activated if, for instance, a sleeping child has been left in the child seat and the driver locks the door. A signal is transmitted to the remote control unit, which alerts the driver via a combination of audible signals and vibration pulses.

The heartbeat sensor is also activated if anyone enters the car and hides inside it. In such a case, the driver is not alerted automatically; instead, he or she must manually request this information within a distance of 100 metres from the car.

The so-called "check car function" is activated by quickly pressing the "panic" button or via a menu selection. At the same time, other on-board information is also monitored – for instance, whether the doors, sunroof and windows are locked.

Existing functions, such as the activation of light sources inside and around the car (Approach Light) and illumination of the driveway (Home Safe Lighting), are carried over in the VPC system.

These functions are activated via buttons on the VPC unit front panel. Opening the cover reveals additional buttons for customising the personal settings in the menu system, along with an information display.

Enhanced communication with the VPC via a cell phone

Two-way communication utilising Bluetooth technology makes it possible for the VPC to communicate with the car via a cell phone.

If "check car" is activated within a distance of 100 metres from the car, the VPC unit communicates directly with the car. If the driver is more than 100 metres away, the VPC can communicate with the car via the cell-phone system.

When the driver leaves the car, all trip-related information and certain navigation system data are transmitted to the remote control unit. This makes it possible for the driver to use the VPC as an alarm clock, for instance. The remote control unit "knows" the distance to the destination, the current traffic situation, average speed, fuel consumption, remaining fuel quantity and so on and it can be programmed so that it informs the driver when it is time to resume the journey in order to get to the destination at a given time – an excellent tool when stopping for a meal on a long journey. 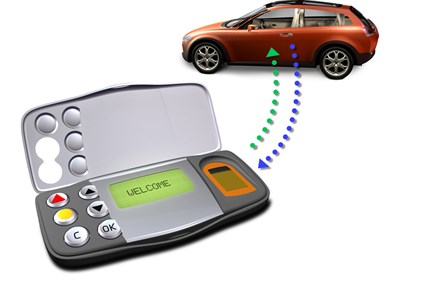