The car that catches the eye

The car driver’s eyes play the main role in the bid to ensure ever safer traffic.

The Volvo Safety Concept Car (SCC) has therefore been equipped with a range of future-generation systems designed to give the driver increased control and better preconditions for making the right decisions in difficult traffic situations.

The interior of the SCC automatically adapts to the location of the driver’s eyes and his or her body size, while advanced technology provides improved vision in every direction, both in daylight and when driving at night.

Roughly 90 per cent of all vital driver information takes the form of visual input through the windscreen and windows of the car. If the quality of this visual information improves, the driver also improves his or her chances of avoiding a collision. With the Safety Concept Car, the Volvo Car Corporation and Ford Motor Company are demonstrating the viability of the latest vision-enhancing safety technologies in cars of the future.

Sitting properly is very much a matter of safety. The concept car therefore has a range of advanced systems that help ensure a proper seating position.

The Volvo SCC automatically sets the appropriate seating position on the basis of the location of the eyes, irrespective of individual build. Sensors scan the precise position of the driver’s eyes and then adjust the driver’s seat to offer optimum vision. After this, the steering wheel, floor, pedals and centre console are all adjusted accordingly, thereby promoting the best possible ergonomics and comfort. Needless to say, the driver can fine-tune the various adjustments to suit individual tastes.

The entire system is based on a Volvo idea that has been further developed and implemented in a concept car, bringing together the expertise of researchers, engineers and designers from Volvo Cars and the Ford Motor Company. The system has also had considerable input from external suppliers such as Johnson Controls, Inc. (the control module that controls the position of the seat, floor/pedals, centre console and steering wheel), Sarnoff Corp. (eye sensor based on IR camera technology), BGM Technologies (capacitive eye position sensor that pinpoints the driver’s head and calculates the position of the eyes on the basis of this data) and Presta (steering column).

Since the system also encompasses adjustments to the steering wheel, pedals and centre console, all the controls are always ideally positioned so that the driver has full control and the best possible conditions for responding to emergencies. A relaxed driving position also boosts comfort, so the driver can be more alert behind the wheel.

In the SCC, these pillars have a new design. The driver can see through the A-pillars at the sides of the windscreen, as they have been rendered partly transparent by using a steel box construction combined with see-through Plexiglass.

The B-pillars, between the front and rear doors, curve inwards at the top to give the driver an unobstructed field of vision to the offset rear. In terms of passive safety, these B-pillars are at least as safe as conventional B-pillars in a roll-over or side-impact scenario as they are integrated with the front seat frames.

The driver is alerted via visual signals in the door mirrors or a combination of visual and acoustic signals as the situation becomes more dangerous.

There are also rearward-facing cameras to supplement the door mirrors. When necessary, the driver can view information from the cameras located in the door mirrors on both sides of the car and this information is relayed in the form of video pictures to a display monitor on the instrument panel.

A camera in the roof bar at the rear shows the area to the rear of the car and also provides good visibility to the rear when the interior luggage compartment is loaded all the way up to the roof. Another camera points downwards to help the driver see if a small child is concealed just behind the car when reversing, for example. When the driver engages reverse gear, the display monitor automatically shows the area immediately behind the car.

The headlamps monitor the road speed and steering wheel movements of the car and adjust the lighting to suit progress.

When driving at high speed, on a highway or motorway, the light beam can be given a longer reach.

When driving at low speeds, for example in the city or when approaching a crossroads, the light beam can be made shorter and broader to light up a larger area close to the car.

When the driver steers the car into a curve, the beam can be directed along the track of the curve to light up the entire road as the car changes direction.

Traditional bulbs have been replaced with fibre-optic technology. The light itself is generated by a light engine located elsewhere in the car and is led to the headlamps via fibre-optic cables. This makes it possible to alter light intensity and beam patterns at lightning speed in response to changing conditions.

In order to improve safety when driving at night, the car is equipped with an infrared (IR) light enhancer. IR technology gives the driver both a longer and a broader field of vision in the dark. The system, which further boosts night-vision capability, has been developed by Swedish safety experts Autoliv.

When driving at night, a black-and-white image is projected onto a glass display located at the top of the instrument panel. This image shows what is concealed in the area that is not lit up by the headlights; for example, if there is a wild animal in the ditch alongside the road. It is also possible to see what is hidden in the blacked-out area between the SCC’s own headlights and the usually dazzling lights of an oncoming vehicle, such as a pedestrian without reflectors on his or her clothing.

A forward-facing camera monitors the position of the car in relation to the centre-marker and side-marker road lines 20 metres ahead of the car. If the car displays signs of veering to either side without activating the turn indicators, the driver is alerted by an acoustic signal.

The Volvo SCC is also equipped with a tyre system, which offers the highest possible levels of safety. This so-called "run-flat tyre", supplied by Michelin, allows the driver to maintain control of the vehicle in the case of a sudden loss of tyre pressure.

With its directional and asymmetrical tread design, the tyre offers both excellent water evacuation and exceptional handling on dry surfaces.

The opportunity to drive on the tyre even after a puncture also has a personal security aspect. Instead of stopping in a vulnerable position, the driver can drive home or choose a safe location before having to change tyres. 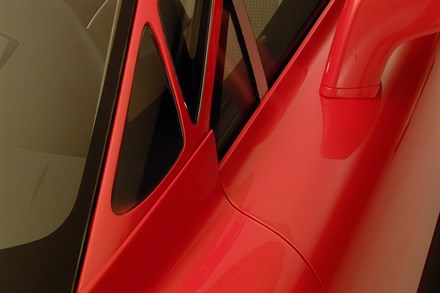 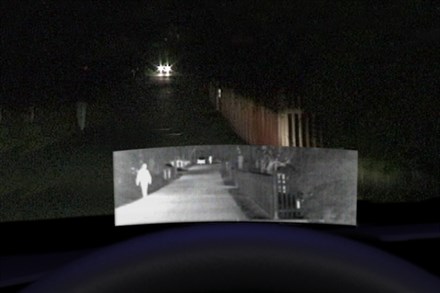