Robert Dahlgren in his Volvo C30 fought his way to the best WTCC (World Touring Car Championship) weekend so far for Volvo Polestar Racing as the championship raced at Donington Park in England.
"What a weekend! Both races are in the top five of my best ever," said Dahlgren.

Volvo Polestar Racing was in the very top from the first test session. Changing weather conditions in qualifying unfortunately meant that the team was forced to gamble with the tactics.
"We took a bit of a gamble that unfortunately did not pay off. It is a thin line between success and fiasco in racing," said Dahlgren.

The mistake provided challenging conditions, to put it mildly, with last grid position for both races. But Dahlgren literally flew through the field to eighth in the first race, a position the Volvo driver improved to sixth in the second race, passing 14 competitors on the way.

"It actually felt inspiring to line up last. I had an incredible confidence for the car and our concept, we were going to climb in the field, it was just a matter of time," said Dahlgren.

The end of the second race saw Dahlgren pushing Chevrolet driver Alain Menu, currently third in the championship, for fifth.

"I was faster but I didn't want to risk anything at the end of the race. The weekend has been our best so far and I am looking forward to continue fighting for top positions, the Volvo C30 has never been better," said Dahlgren.

Dahlgren scored a total of 12 points from the weekend and Volvo Polestar Racing heads to Oschersleben in Germany in two weeks time, strengthened by the successful weekend in England.

"We got yet another receipt today that our development program is paying off. Oschersleben is a new track for us and it is by no means going to be easy. But we have got a strong package and a strong position for further top results," said Christian Dahl, Managing Director of Volvo Polestar Racing.

Watch the spectacular races at Donington Park - highlights are going to be available at www.volvopolestarracing.com in a few days! 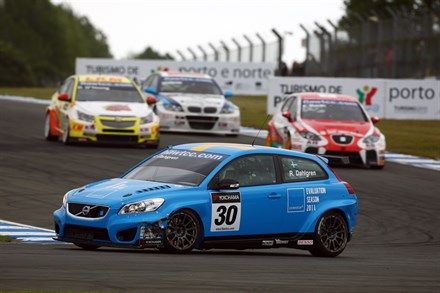