Thed Björk and Volvo Polestar Racing were crowned Swedish Touring Car Championship (STCC) champions during the penultimate race weekend of 2013 at Tierp Arena. The 2013 STCC title is Volvo's fourth for drivers and fifth for manufacturers since the strat of STCC in 1996.

"This is my best ever title! The feelings right now are not describable, it is just so nice after all the hard work during the year. Huge thanks to my engineer Jan Andersson and my mechanics that always deliver a perfect car to me," said Björk.

"We have raced in STCC for 16 years and Thed's title is definitely one of our very best. To secure the titles today after a hard and fair fight with BMW is extra nice. Everyone in Volvo Polestar Racing have done an amazing job this year," said Derek Crabb, Executive Motorsport Director of Volvo Cars.

The race at Tierp Arena was eventful where Björk started from pole position and crossed the line in third as the two BMW drivers Richard Göransson and Fredrik Larsson had battled their way past.

The fight was hard throughout the field where Linus Ohlsson and Fredrik Ekblom fought their way to fifth and sixth position respectively, only one second separated the two over the finishing line.

"I didn't have a car to fight for the top today unfortunately, that is obviously a disappointment. But we had a good fight in the race that was good fun and I am happy over the points I got today," said Ohlsson.

"Things just wasn't there for me this weekend. The race was tough, but I managed to gain four places which is a bonus of course. I am looking forward to the season final at Mantorp Park, a track suiting me much better," said Ekblom.

Prince Carl Philip Bernadotte secured a points finish for the fourth time this year with tenth position in the race today.

"The race was hard with a lot of incidents. But I improved my best lap time from qualifying to the race, so I am continuing to make progress and learn. That is the important thing and to score new points is something I am happy over of course," said Prince Carl Philip Bernadotte.

Robert Dahlgren had a tough race where he first was penalised for rolling a couple of centimeters before the lights went to green and later retired from the race due to gearbox problems.

"There isn't too much to say, the speed was there, but we had no luck. I lost important points in the fight for second with Göransson unfortunately, so I have to go all in for the final," said Dahlgren.

The STCC 2013 season final is held in two weeks at Mantorp Park where Volvo Polestar Racing arrives as STCC champions for both drivers and manufacturers. 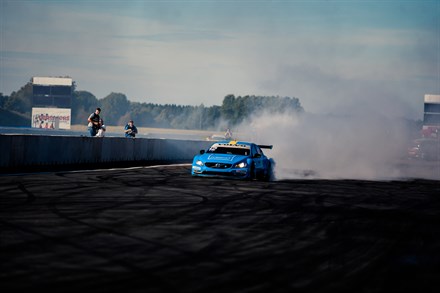 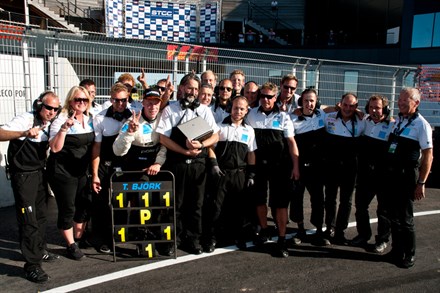