The crew aboard the VO-70s eat at lot of food and eat often. Cooking is a constant process.
But we are not talking about the heights of the culinary art. All dinners are freeze-dried.

”The food served up may give you pause for thought. Then you just clear your plate”, says Gurra Krantz, a professional sailor with a total of four Volvo Ocean Races and Whitbread Round the World Races behind him.

The boats are fitted with twin-burner gas cookers. Meals are prepared by the stand-by watch, that is, those crew members who are neither resting nor working on deck.
The food comes in large bags, enough to cater for the whole crew. The secret is to leave the freeze-dried food to soak for a sufficient period of time. If this is not done properly, the food absorbs body fluids instead, causing dehydration and stomach cramps.

So the members of one stand-by team pus the food to soak. The next stand-by team heats the water, stirs the food and dishes it for anyone who has time to eat. Everyone else has to eat when they have time, and can only hope that the food is still warm. The next stand-by team deals with the washing-up.
The menu is repeated every week to ten days. Some dishes are more popular than others.
”Beef in a dill sauce is something which you grow tired of fairly quickly”, says Gurra Krantz. ”And freeze-dried Chili con Carne tastes like ash. That is one you pass on if you have the option.”
For breakfast, there is cornflakes or porridge with powdered milk. Between meals, chocolate and power bars are consumed, as well as vitamins, minerals and antioxidants.
Instant coffee, instant hot chocolate and tea bags are available aboard, as well as energy powder which is can be turned into soft-drinks or yoghurt when mixed with cold water.
The diet varies aboard the different boats. Normally, a menu is drawn up with the help of a dietician. The crews then test the menu before it is finally adopted.

"But not everyone follows this procedure", Gurra Krantz explains. "In 1989/90, the Charles Jourdan only carried pasta and oil aboard. It must have been a bit monotonous."
"This year, the Pirates of the Caribbean are taking parmesan cheese, as an accompaniment to the freeze-dried food."

Fresh water is produced using a water-maker, which desalinates seawater. The boats also carry 50 litres of water for emergency use. Emergency rations are stored in the liferafts. The name emergency rations is a very apt description, because you certainly would not eat your fill of it. If there are any delays, the crews simply have to ration their food. This is particularly the case during stages with light winds.

"With light winds, low weight is a priority. These stages also take a long time to complete".
"During stages with strong winds, it is the opposite way around. Things happen quickly, and large quantities of food act as useful ballast".

Sailing in the Volvo Ocean Race is demanding, to say the least. A crew member requires 5,500 calories per day on average, but during the most demanding stages, he or she may require up to 8,000 calories a day.
The mediocre cooking, in combination with stress, means that the body converts muscle tissue into fat.
"You lose a lot of weight. In 1997, I lost eleven kilos during a single stage", says Gurra Krantz.
"The body breaks down. You leave home like a gladiator, and come back looking like a couch potato".

Descriptions and facts in this press material relate to Volvo Cars' international car range. Described features might be optional. Vehicle specifications may vary from one country to another and may be altered without prior notification.
Media Contacts
Related Releases 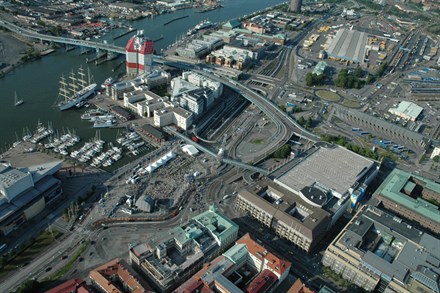