Can a car – or a company – really have a soul? Absolutely – there are many who believe in the ‘Volvo soul’ – the special Volvo spirit which sets the company apart from others.
“It’s the Swedish heritage of concern and security,” believe some, although most prefer the term ‘family feeling’ to describe the concept.
Three generations of the Ganemyr family, with 100 years of Volvo service between them, know all about the Volvo soul and symbolise it perfectly.

Then 16, Gerth Ganemyr began work as a painter of body parts at Volvo, Göteborg on 15 January 1937 – just ten years after the company’s foundation – and retired on pension on 31 October 1986, almost 50 years later, from his job in charge of corporate secrecy at Volvo Car Corporation. By then, his son, Tony, had already been with the company for over 22 years, while his grandson, Johan, was also to start work at Volvo Cars a few years later. In autumn 2004, the trio reached the milestone of a combined 100 years of Volvo service!

Long service is not unusual at Volvo. Two people hold the ‘record’ of 55 years with the company, while many others have been with it for over 42 years.

‘15 Oldest’
The figure 42 is significant as the number of years of service now required for eligibility for election to the ‘15 Oldest’ club, which was established in 1959 by Volvo’s founders, Assar Gabrielsson and Gustaf Larson, to reward long-service employees with shares after 25, 35 and 45 years of employment – a tradition which has survived to this day. The original group consisted of the 15 longest-serving employees and, since the founding fathers believed that those loyal partners who stayed behind to take care of the home were also part of the Volvo ‘team’, they were also invited to the club’s inauguration.

The club still consists of the 15 longest-serving and still-active employees of the Volvo companies in Göteborg (including the present Volvo Group companies as well as Volvo Cars). On retirement, a member may continue to take part as a ‘senior’ is all meetings, activities, excursions, and so on. Following in the footsteps of his father, Tony Ganemyr will most likely become an active member in 2006.

Crayfish for all
History records that Volvo was conceived over a bowl of crayfish. Since the company’s founders were anxious to maintain this tradition, all employees were invited to the company’s annual crayfish party as long as the company was of manageable size.

Assar Gabrielsson was an opponent of trade unions during the company’s early years, and to counteract the efforts of the Swedish Union of Industrial Employees (SIF) to recruit Volvo white-collar personnel, he asked his staff members to form their own body. Born in 1939, the Volvo Staff Association (VTK) successfully enrolled all but four of the company’s white-collar staff.

VTK organised social functions, purchased holiday cabins for renting to employees, held a much-appreciated decathlon in various sporting disciplines and started a members’ newsletter which became the forerunner of today’s personnel magazines. Its Christmas and St. Lucia’s Day parties became legendary, not least for the songwriting and cabaret talents of the members.

The Volvo family
Although the unions naturally continued to grow, VTK also went from strength to strength and remains active to this day, with a current membership of about 5,000.

The crayfish parties, the ‘15 Oldest’ club, VTK, and the encouragement given the staff by the founders to play golf together and, if possible, to find their life partners among their company colleagues, all played a major role in promoting the famous Volvo spirit. Company personnel mixed both at work and play, making it plain to the world at large that the Volvo workforce was one big family. Employees felt at home and stayed with the company for long periods. And if somebody – despite the odds – did change employers, it was regarded as a major merit to have worked at Volvo.

Now 84, Gerth Ganemyr has very clear memories of his many years with the company:

“Volvo really was like a family back then,” he remembers. “The work was tough, but we had many good times together. Today, the company is too big to have that family feeling – instead, it’s a whole ‘tribe’ consisting of many ‘families’. Now, each unit works in much the same way as the whole company did before.”

However, he believes that the Volvo spirit is no longer the same, a natural consequence of our changing times. People now have a greater tendency to separate their working and private lives, and they are socialising less. The job is also different; people are spending less time in the one position and are changing colleagues more often.

Heart of Volvo
Son Tony, who joined the company on 24 April 1964, now has more than 40 years of service. He started work as a mechanic in the competition department – although, as a 16-year-old, he did not have a driving licence – before spending several decades in Volvo’s competition activities. He now works with press cars at Public Affairs and agrees that the spirit – or ‘soul’ – of the company has changed:

“Yes, Volvo is now so big that loyalty to the company is not what it used to be. Nevertheless, many employees do have ‘Volvo’ engraved on their hearts and I, for one, treat the company’s money just as carefully as my own. Like my father, I have been here since I was 16 and I’m grateful for what Volvo has given me – not just a salary, but a wealth of experience and knowhow.

“Not to mention a real sense of self-confidence,” adds Tony’s son, Johan. Now 32, he joined Volvo Cars in 1994, initially as an outside consultant, and has been employed by the photo department since 2004.

“Not so long ago, the job meant more than just money to most people,” continues Johan. “At that time, people used to meet outside the job, take a sauna together or share a few beers. Today, many of them are simply there for the money. At the end of the day, they clock out and go home to their families, who don’t know a whole lot about the person’s job.”

However, four-year-old Oskar – Johan’s son and Gerth’s great-grandson – does know what Daddy does. Cars are his main interest and he knows exactly which is the best in the world: “Volvo!” And where he wants to work when he grows up:
“At Volvo!”

So the fourth generation of Ganemyrs is already looking to the future!

Proud memories
Each of the ‘100-year’ trio has his own views on what is happening to the Volvo spirit – its soul – now that the company is owned by Ford:

“In my time, the founders themselves had an influence on the spirit,” recalls Gerth. “There were relatively few of us and they asked all of us for our opinions on the most important matters. Now, the owners are on the other side of the ocean and we must find a way of marrying the American culture with the Volvo spirit without affecting it adversely.”

Both Tony and Johan believe that Ford has shown impressive respect both for Volvo Cars and the Volvo spirit.

“We feel that the effect of the American culture on us is growing steadily,” says Tony, “and that change also presents a number of opportunities. Without Ford’s substantial financial resources, we at Volvo Cars could never have successfully developed the new cars we are planning to launch in the future. So it’s important to think big and have a holistic view.”

In his press car work, Tony is present at the birth of every new model – the instant at which a car is first presented to the media. To be there and witness the journalists’ reactions is a privilege not enjoyed by all. He continues:

“Volvo has a high reputation and there are many occasions for pride in the company. I feel especially proud of events such as the launch of the Volvo 850 in 1991 and the S80 in 1998, as well as the XC90 and our fantastic five-cylinder diesel – the D5 – a few years ago.”

“At the time, the Volvo 850 was the biggest-ever industrial project in Swedish history. I was involved in preparing the first press cars and my heart was bursting with pride when P.G. Gyllenhammar himself drove the first of them from the Volvo Hall in Torslanda to Smögen.”

All three generations of the Ganemyrs are also agreed that leaders like Hans-Olov Olsson are vital to the continued existence of the Volvo tradition and spirit:

“If the next president of Volvo Cars is an American, he or she will really have to stand guard over our soul,” declares Tony Ganemyr, concluding with a simple summary on which all three are agreed:

“I believe that Volvo is secure!”

1. Gerth Ganemyr (front), his son, Tony, and grandson, Johan, boast a combined total of 100 years of service with Volvo Cars. They believe that Volvo’s ‘soul’ resides in the company’s family spirit.

2. Gerth Ganemyr (left), his son, Tony, and grandson, Johan, boast a combined total of 100 years of service with Volvo Cars. They believe that Volvo’s ‘soul’ resides in the company’s family spirit.

AB Volvo commenced the manufacture of cars in Göteborg in 1927. The operation was soon complemented by the production of trucks and buses, and was later expanded to include marine, aircraft and stationary engines. In 1999, Volvo Car Corporation was sold to Ford Motor Company and has since been a wholly-owned subsidiary of Ford. Since the acquisition, the Volvo brand has been vested in AB Volvo/Ford Motor Co., a joint holding company.

Keywords:
Historical
Descriptions and facts in this press material relate to Volvo Cars' international car range. Described features might be optional. Vehicle specifications may vary from one country to another and may be altered without prior notification.
Media Contacts
Related Images
Oct 27, 2004 ID: 8861 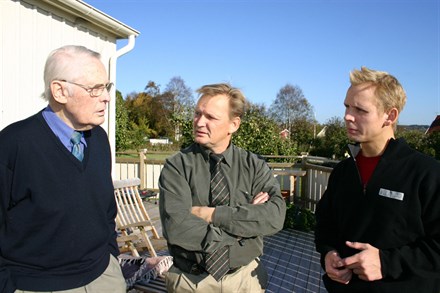 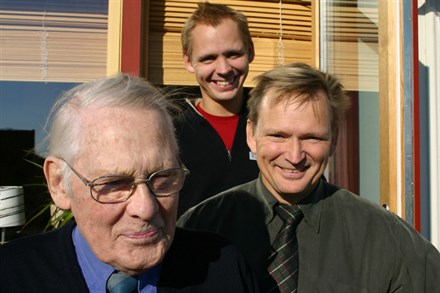