Out of over 5,000 staff at Volvo Car Corporation’s Torslanda Plant, 26 per cent are women. As in any car production plant, assembly is the area which calls for most personnel. Marie, Jasmine and Celeste all work in the final assembly plant.

From operator to product workshop manager
Working on the assembly line was Marie Sölvesvall’s first job at Volvo when she joined the company almost 20 years ago. Since then she has worked her way up through the career ladder and is now a Product Workshop Manager.
That job title means that she has responsibility for about one-fifth of all the final assembly work done at the Torslanda Plant, and is in charge of some 350 members of staff. This makes her the highest-ranking woman in this assembly plant.
“I didn’t have any particular career plans when I started work here. I had wanted to join the police force, actually, but because I’d put more energy into sports than study at school, my grades were not good enough. My dad was the one who suggested applying for a job with Volvo,” says Marie.

Project manager for continuous improvement
Celeste Batista has also worked at the assembly plant for about 20 years. School fatigue was the reason for her starting work at Volvo.
“I dropped out of my upper-secondary school course. My parents, who are from Portugal originally, accepted that, but they said that if I didn’t want to continue at school, I’d have to go out and get a job.”
And there were plenty of jobs to be had on the Volvo assembly lines. Celeste, too, took the opportunities that arose, to try out a variety of kinds of work here. Having two children did not stop her from keeping her job on the assembly line. Like most mothers in Sweden, she took about a year off work for each new addition to the family.
And being the mother of two young children did not put her off deciding to train as a supervisor in 1996.
“Looking after the children is something my husband and I have always shared. Because I start work so early, he’s the one who does the breakfast for them. They’re 12 and 16 now, but when they were little, he was always the one who took them to day nursery.”
These days Celeste works as a project manager. For quite some time she was involved in putting Volvo’s successful new SUV, the Volvo XC90, into production. Now she manages a project centred on paintwork quality improvements.
“Of course, the vehicle bodies have already been painted before they arrive in the assembly plant, but we have to ensure that they’re not damaged in any way while they’re being worked on here.”

Working at Volvo Cars a positive change
Unlike Marie and Celeste, Jasmine Giavalisco has not spent almost half of her life so far working for Volvo. She is 32, and first became an employee here in 2000. For her Volvo meant a change of career – and substantially higher pay too.
“It was a friend of mine here who told me about the job. At the time I was earning only SEK 14,000 (approx. USD 1,790) a month as a receptionist in a small company. Now, after two and a half years with Volvo, I’m earning about SEK 20,000 (approx. USD 2,550),” says Jasmine.
“As a woman, I’m very pleased with what I’m earning here.”
And she is certainly not the only woman who has boosted her income by abandoning a traditionally female profession in favour of work in the car factory. Most departments have a number of women on their staff who used to be healthcare professionals, for instance.
Jasmine quickly grew to like the work at Volvo, although it was quite a change for her.
“Not everyone takes readily to working here. You have to get used to the constant noise, to working against the clock, and to working in a team. You have to make that adjustment – it makes no difference whether you’re male or female.”
It can also take a while to get used to the way people talk in a traditionally male workplace.
“It’s not that the language used contains references to sex. It’s more that the male attitude sometimes boils down to: ‘I’d better help you with that, dear. Do you really think you can manage it?’” Celeste explains.
“You have to be a bit hard-nosed and speak your mind from time to time. But I didn’t find it a problem,” says Jasmine, who points out that she has made plenty of new friends amongst her workmates.

Improved ergonomics give equal opportunities
So just how hard is the work in the assembly plant?
“It is hard, but women are perfectly capable of managing,” says Jasmine.
Marie and Celeste have seen how work on the production line has changed over the last 20 years. They don’t deny that the work is still physically demanding, but comment on how much it has changed in terms of ergonomics. The heaviest jobs have gone.
“When I started here, there was a distinction between male jobs and female jobs. It’s not like that at all now. Men and women do the same work,” says Celeste.
Swedish law requires all companies over a certain size to have an Equal Opportunities Plan. Celeste is a member of the Diversity and Equal Opportunities Committee at the Torslanda Plant.
“As the representative of the assembly plant, I feel I really do have influence. The committee has a say in defining the equal opportunities targets, and also makes suggestions on how they should be achieved. Increasing the proportion of women in management is an example of one of these,” Celeste explains.
All three agree that women at the plant have the same opportunities for development as the men.
“But if you want to get anywhere, you have to be active yourself. You have to make your voice heard and be a self-starter,” says Jasmine.
After two years on the assembly line, she was keen to work in logistics, the department where she works at present.
Marie Sölvesvall has her manager’s office overlooking the assembly line. She feels that the psychological strain increased as she took on more responsibility.
“Sometimes I wish I could go back to the assembly line to work – being a manager is mentally demanding,” she admits.
Both Marie and Celeste think that women managers definitely differ from male ones in one particular respect:
“We know more about the family situations of our staff than male managers would, because we ask about things like that. Women tend to open up more about feelings,” says Celeste.
“That in itself sets a different tone,” says Marie.
Being the only woman on her management grade is not a problem for her.
“I don’t feel that I have to perform better because I’m a woman. But I do know that my male colleagues’ children don’t ring in to ask what they’re having for dinner…”
Celeste knows exactly what she’s talking about.
“Although my husband does help out around the house, I’m still the one who takes responsibility for domestic matters. That’s why I’m the one the kids get on the phone to.”
Marie would have no objection to her daughters working in the car plant.
“But I would advise them not to stay too long on the production line – simply because there are so many other opportunities in the company,” she says.

Keywords:
Manufacturing
Descriptions and facts in this press material relate to Volvo Cars' international car range. Described features might be optional. Vehicle specifications may vary from one country to another and may be altered without prior notification.
To view the full copyright information click here
Media Contacts
Related Images
Aug 12, 2003 ID: 7947 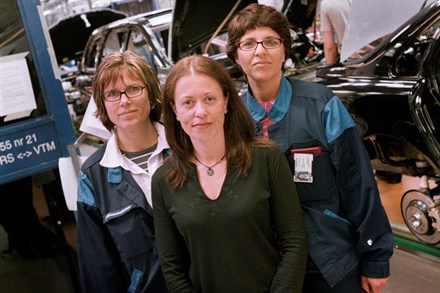 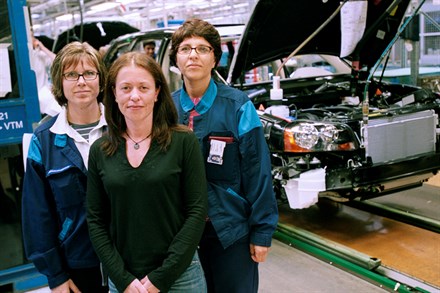