“This company gives you every chance to succeed”

“Volvo Cars offers enormous opportunities to people who want to try different things. If you are interested and prepared to take on challenges, you have every chance to succeed in a company this size! If you make the effort yourself, you’ll reap the rewards.”

Magnus Hellsten knows this for a fact, since he started his career as an assembly line worker and is now Senior Vice President, Manufacturing, with responsibility for all Volvo Cars' production.

In October 1980, 21-year-old Magnus Hellsten knocked on the door of the recruitment office in the Torslanda plant. It was the year following the second oil crisis of the 1970s and jobs were scarce. He had no previous connection with Volvo, but had studied mechanical engineering for three years and spent a year at Chalmers.

“Chalmers was not my cup of tea,” says Magnus, “so I decided to get a job instead. Volvo Cars was interesting – I was obviously attracted by the cars, but also by the brand and the company’s history. And the people who had achieved all of that fascinated me.

“I knew that it would be fun to work there, and I was hoping to get a chance to make a mark.”

He recalls that the initial period was tough and that the plant was sometimes shut down on Friday:

“As a new boy, it was then my job to clean the floor under the material pallets when everybody else was at home...”

Although Magnus Hellsten was happy in the job, he took time off after about a year to complete his fourth year of engineering studies. Following a number of tests and interviews, he also completed Volvo’s own basic production engineering course.

“The interview panel asked me what had attracted me to the plant and the answer was fairly simple – I wanted to be involved and have an input, with a chance to build quality and efficiency.”

After completing the course, the question was whether to return to the assembly line or seek another job. In the event, he was taken on as a production engineer.

“Göte Larsson, a production engineer who was my mentor, advised me ironically never to get involved in production since ’there’s nothing but problems there’. Of course, he meant the complete opposite – that I should spend as much time as possible in production and view the problems as opportunities. It’s an enjoyable job and you’re right there where it’s all happening.”

Magnus spent a couple of years in production. Among other things, he learned the difference between the design engineer’s ’clock’ and the one used in the plant, where a car is built every minute and changes need to be implemented quickly.

“I learned to understand the conditions under which both of us work. The engineers cannot make changes just like that.”

“The Volvo 240, which was to be replaced successively by the new Volvo 850 in 1992, was built on Line 2. In preparation for the change, I became responsible for the production aspects of the project,” recalls Magnus Hellsten. “When production of the 850 started, I was given responsibility for the same areas.”

The many problems which can afflict car production became apparent immediately when manufacture of the 850 was postponed for a year and it was decided to build the 940 in the interim.

“It was an exciting time. Working to overcome the problems was a major responsibility. But two weeks after the start of production, we had achieved the same high standard of quality as on Line 1!”

Production of the 850 got under way in time and Magnus assumed responsibility for Line 2 as a whole in 1994. The next challenge was to come three years later.

“I had indicated that I would be happy to spend time abroad. However, at the time I was offered the job of managing the plant in Bangkok, Thailand, I was already married and had three sons, the youngest only five weeks old.

“The timing was not exactly the best – I suppose it never is. However, during an exploratory visit to the city in autumn 1997, we revised our earlier view – which we had formed during our honeymoon some years earlier – that we could not live in such a polluted city.

Once again, problems reared their head – Asia’s economy was in recession and inflation was high. Sales of cars were simply not viable and the plant had to shut down for six months. Magnus was advised to lay off the workforce and recruit new people later.

“I did not want to do that,” he says. “We had loyal and well-trained employees. And training in new people would have been both expensive and time-consuming. Instead, I examined their finances and found that they could get by on 90% of their wages. So we paid them that and sent them home.

At the end of 2001, he was faced with a new choice – to remain in Bangkok or take up a new challenge as head of Transmissions and Chassis at the company’s component plant in Köping. The culture shock which the family has undergone in Bangkok was almost equalled by what they experienced in this quiet little central Swedish town.

“We bought a house which turned out to be of major importance in Volvo’s history. When the company’s founders came to Köping to order the first gearboxes for the ÖV4, this was where the deal was done. So we felt the breath of history.”

The Köping plant is now Ford Motor Company’s All-Wheel Drive Centre of Excellence, with gearbox manufacturer Getrag as the biggest partner in the joint development of final drives and transfer gearboxes for Volvo’s AWD models and, to some extent, for Ford.

Magnus Hellsten notes that two in three cars currently produced in Torslanda are equipped with four-wheel drive. In addition, every second car is an XC90.

“Initially, we had expected to produce about 5,000 four-wheelers annually,” he says. “Today, we are building something like 150,000, so it can be justifiably be said that Köping has undergone serious development over the years.”

In 2003, Magnus was offered the job of general manager of the Torslanda plant. But he was reluctant to use the cliché that the wheel had come full circle:

“No, that implies that one’s career is finished,” he says. “I preferred to think that the spiral was continuing to wind – that development, including my own, was ongoing.”

And so it proved after less than two years, when he was appointed Senior Vice President, Manufacturing in November 2004, in succession to the retiring Curt Germundsson.

“Volvo offers enormous opportunities to people who want to try different things. If you have the interest and are prepared to take on challenges, a company this size offers every opportunity! If you make the effort, you’ll reap the rewards.”

He stresses that things are happening all the time in the automotive industry and that development goes on without interruption.

“In the production sector, you live with the conditions – which change immediately a product is changed or a new one introduced. New technologies create new conditions in our changing world. Today, the market may be so weak that you have to close the plant; tomorrow, everything may have changed and you find yourself working flat out.

“I have nothing but happy memories of my journey through Volvo – each step has made me a little better and a little wiser,” concludes Magnus Hellsten.

Magnus Hellsten is an outstanding example of the opportunities offered by a company like Volvo Cars. Starting his career on the assembly line, he has risen to become head of all production.

Descriptions and facts in this press material relate to Volvo Cars' international car range. Described features might be optional. Vehicle specifications may vary from one country to another and may be altered without prior notification.
Media Contacts
Related Images
Nov 03, 2004 ID: 8875 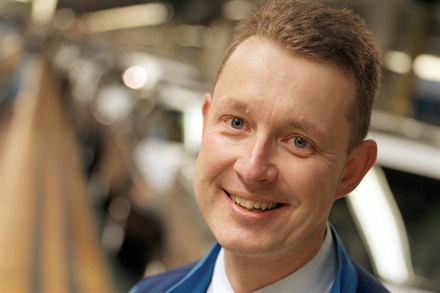