Volvo is continuing to extend its programme of four-wheel drive AWD models by launching the system in the prestige model, the Volvo S80. All-wheel drive provides the best possible acceleration on all road surfaces, combined with extremely stable road performance.

The Volvo S80 AWD has the same electronically controlled all-wheel drive system as the Volvo S60, V70 and XC models. It is combined with the five-cylinder, light-pressure 2.5 T turbocharged engine and an automatic transmission. The chassis has dynamic settings to provide stable, consistent driving characteristics.

An automatic levelling system is standard, thereby ensuring no loss of driving stability when the car is heavily laden. The DSTC (Dynamic Stability and Traction Control) stability system is an option.

The Volvo S80 AWD will be marketed in The Nordic countries, Germany, Austria, Switzerland, USA and Canada.

Volvo’s AWD system is based on permanent all-wheel drive. The torque is distributed automatically between the front and rear wheels, depending on the road surface and driving style. This distribution is regulated electronically and completely steplessly.

In normal driving on a dry road, the car is driven almost entirely by the front wheels. If the road conditions deteriorate and the front wheels display a tendency to spin, more power is automatically distributed to the rear wheels. This redistribution takes places very rapidly, without the driver noticing any change.

During acceleration, the AWD system finds the optimal distribution to match the road conditions at lightning speed – and engine power can be utilised to the full to drive the car forward.

The Volvo S80 has the same type of electronically controlled hydraulic clutch as Volvo’s other new AWD models.

This hydraulic clutch, which has been developed in collaboration with Haldex AB in Sweden, is located near the rear axle. This is normal in cars that were originally front-wheel driven. The hydraulic clutch controls the rotation of the input and output driveshafts. When they rotate at different speeds, the hydraulic clutch intervenes and regulates the distribution of power.

It engages and disengages in less than 100 milliseconds – and redistributes the power without the driver noticing any change. The front wheels only need to turn a quarter of a revolution more than the rear wheels for maximum torque to be redistributed to the rear axle.

The maximum distribution of torque to the rear wheels is around 70 per cent. In conjunction with acceleration, the rear wheels can never turn more rapidly than the front ones. This makes the car directionally stable and easy to drive in every situation.

Clutch controlled by a number of signals

The electronic control system for the AWD clutch receives information from different functions in the car. The rotation of the wheels is registered by ABS sensors, which constantly measure the speed of each individual wheel. Throttle is measured by the depression of the accelerator. The current torque and speed of the engine are also registered by the management system, together with the degree of braking. This information is then combined to ensure that the torque is distributed as effectively as possible in every driving situation.

The hydraulic clutch distributes the torque between the axles but not between the right and left sides. For this reason, Volvo’s AWD models are also equipped with the TRACS traction control system – on both the front and rear axles.

TRACS distributes the tractive force steplessly from side to side by braking a slipping wheel and redistributing the power to the other wheel on the same axle.

The TRACS function is based on information from the ABS sensors on the wheels.

The AWD system in the Volvo S80 cannot be combined with the FOUR-C (Continuously Controlled Chassis Concept) active chassis.

Keywords:
S80 (2007)
Descriptions and facts in this press material relate to Volvo Cars' international car range. Described features might be optional. Vehicle specifications may vary from one country to another and may be altered without prior notification.
Media Contacts
Related Images
Nov 11, 2004 ID: 8879 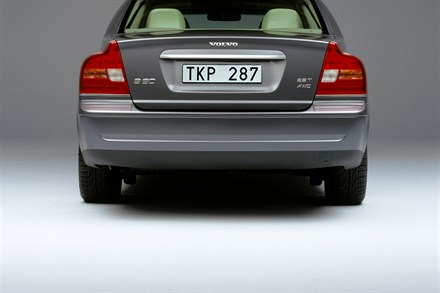 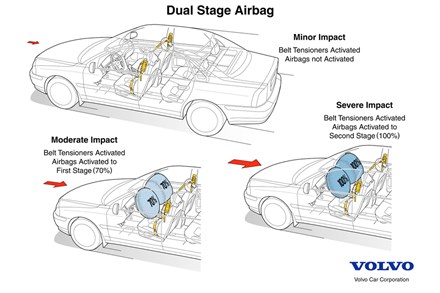