Chassis and powertrain: performance and roadholding at premium level

The Volvo XC90 is a vehicle designed for all types of roads, irrespective of the surface beneath the tyres and the weather conditions.

Even though it is not basically intended for off-road driving, the combination of electronically controlled four-wheel drive and 218 millimetres of ground clearance creates the right preconditions for continued progress when the going gets tough.

The feeling of safety that the high seating position gives the driver is supplemented with the knowledge that he or she can control the car with the help of instant, well-weighted response from the chassis, engine and brakes. Progress is thus more relaxed and comfortable. The chassis in the Volvo XC90 is designed to give the vehicle the same ride and roadholding as a passenger car. It is based on the chassis of the Volvo S80, S60 and V70, cars that are renowned for their excellent road manners. In the Volvo XC90, however, the suspension has been beefed up and dimensioned to handle heavier loads and higher ground clearance.

The rear suspension of multi-link type is well isolated, with the dampers and springs attached directly to the subframe. This results in a quieter ride, since road and transmission noise is largely filtered out before it reaches the bodywork. The front suspension is of MacPherson type and, together with the new ZF steering gear, promotes increased precision and sharp response. The Volvo XC90 has an extremely wide track (1634 mm front, 1624 mm rear) and a long wheelbase (2859 mm between the front and rear axles). This makes for exceptional stability, with the vehicle behaving very consistently and dependably even on curving, twisting and uneven roads.

The Volvo XC90 can be specified with a range of wheel up to 18 inches.

The braking system in the Volvo XC90 is dimensioned to help stop the vehicle safely, even when it is fully loaded with seven people and their luggage. This is achieved with an optimised brakesystem and EBA (Emergency Brake Assistance). This system monitors how quickly the brake pedal is pressed, and can thus determine if the driver is panic-braking. In such a situation, the brake pressure is boosted to maximum in the shortest possible time, thus reducing the stopping distance.

One important ingredient in the recipe for safe driving pleasure in the Volvo XC90 is its electronic AWD system, developed in close cooperation with one of the foremost experts in this area – Haldex of Sweden.

Just like in previous AWD models from Volvo, the four-wheel drive system in the XC90 operates entirely independently of driver input, that is to say power is distributed automatically between the front and rear wheels for best possible grip on all types of road surfaces.

The electronically controlled AWD system is intelligent. It monitors the vehicle’s contact with the underlying road surface and assesses the signals that the driver receives through the steering wheel, brake pedal and accelerator. This information then helps determine whether, and if so how, the system should respond.

In normal driving on dry roads, almost all power is delivered to the front wheels.

As a result, the AWD system in the Volvo XC90 has all the benefits of permanent four-wheel drive, without the accompanying disadvantages such as higher fuel consumption and heavier weight.

The electronic AWD system interacts in the Volvo XC90 with the active chassis systems DSTC – Dynamic Stability and Traction Control. This is an anti-skid system that automatically counteracts any initial tendency towards a skid before the driver even has time to notice. The system continuously compares the vehicle’s direction of progress with the driver’s steering wheel movements. If the vehicle shows any tendency to start skidding, the brakes are instantly applied to one or more wheels as necessary until the vehicle stabilises and the skid is avoided. DSTC also includes an anti-spin system that automatically brakes the wheel that spins, so that drive is diverted to the wheel with the best grip. It also controls the engine torque.

Engines for every need

The Volvo XC90 is available with a choice of three engines, all made entirely of aluminium:

All three engines come from Volvo’s passenger car range, but they have been re-profiled to suit XC90. In particular, the petrol engines produce far more torque from lower down the rev range. Fuel consumption (EU combined): 9.0 litres/100 km (5-seater).

The 2.9 litre 6-cylinder engine is the same unit that powers Volvo’s largest sedan, the S80 T6. It has a parallel turbo system – two small and highly efficient turbochargers that are installed alongside each other. They are driven by and feed three cylinders each. The T6 engine is equipped with variable valve timing or CVVT on both the inlet and exhaust sides. CVVT adjusts valve timing to suit the engine’s current revs and load, and it thus exploits the engine more effectively, reducing fuel consumption and emissions. One of the most important results is that maximum torque is available from just 1800 revs/minute, compared with the 2000 revs/minute of the 2.8-litre version.

The Volvo XC90 T6 has 4-speed Geartronic automatic transmission as standard. With Geartronic, the driver gets the best of both worlds: on the one hand, the transmission can be left to take care of gearchanging entirely automatically, or the driver can over-ride the system to change gears manually without a clutch pedal.

The automatic transmission is adaptive, which means that it monitors the driver’s driving style and adjusts the gearchanging pattern accordingly. It also features a "W" setting for winter driving on slippery surfaces. Here, the car starts off in a higher gear to avoid wheelspin and loss of control.

The 5-cylinder light-pressure turbo engine now reaches its maximum torque of 320 Nm (236 ft.lbs) from just 1500 revs/minute, giving the XC90 excellent starting characteristics. This has been achieved with a longer piston stroke, increasing engine displacement from 2.4 to 2.5 litres. This change is matched by a somewhat smaller turbocharger which steps into operation a bit earlier. Like its bigger sibling the T6, the 2.5 litre engine has Dual CVVT.

In addition, power output has increased from 200 to 210 (US 197 to 208) brake horsepower. The 5-cylinder light-pressure turbo engine can be specified in combination with a 5-speed Geartronic automatic transmission plus, from mid-2003, a 6-speed manual transmission.

The newly developed 5-cylinder 163 bhp diesel engine features second-generation common rail technology. Fuel is injected into the cylinders under extremely high pressure, up to 1600 bar. This ensures an exceptionally finely distributed supply of fuel throughout the injection sequence. The result is remarkably efficient combustion, boosting the engine’s efficiency and reducing emissions.

The turbocharger is of the VNT (Variable Nozzle Turbine) type. This means that the turbine features movable vanes on the inlet side, which promotes a high turbine efficiency rating throughout the rev range. This allows a high boost pressure from low revs, resulting in a flat torque curve and higher power output.

The diesel engine transmits its power via a 5-speed Geartronic automatic transmission and gets the new 6-speed manual late 2003.

Keywords:
XC90 (2002-2014)
Descriptions and facts in this press material relate to Volvo Cars' international car range. Described features might be optional. Vehicle specifications may vary from one country to another and may be altered without prior notification.
Media Contacts
Related Images
Sep 03, 2002 ID: 7228 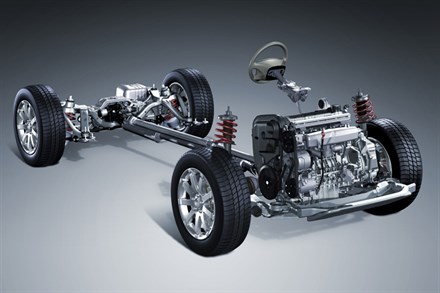 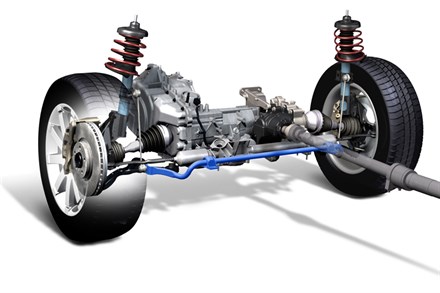