Volvo Cars can look back on a tough year from the sales viewpoint – and on a highly successful launch year for the new Volvo XC90.

"We had high expectations, but we did not dare hope for quite such an overwhelming reception. We had more than 15,000 confirmed orders even before the first XC90 was delivered to a customer last autumn," says Hans-Olov Olsson, President and CEO of Volvo Car Corporation.

"The demand is so high that we have decided to raise the annual target to 60,000 vehicles," says Hans-Olov Olsson. "Nonetheless, we will never permit any risk of over-capacity. A strong demand from the market is important both to our economy and to that of our customers. Continued high demand promotes a high resale value – and this too is an important sales argument."

It is expected that about 65 per cent of the annual target of 60,000 Volvo XC90 cars will be sold in North America. Europe will account for about 25 per cent, while the remaining 10 percent will be spread throughout the rest of the world.

The first North American customers received their cars in late autumn 2002, with deliveries to European customers getting under way in early 2003.

The Volvo XC90 has received a number of awards since it was unveiled to the world press at the Detroit Motor Show in January 2002. Among the many accolades the new car received was "SUV of the Year" by America’s influential Motor Trend motoring magazine.

"In this industry, there is widespread recognition that this award usually helps promote sales. We naturally take this with a pinch of salt, but the title does nevertheless have definite commercial significance," explains Hans-Olov Olsson.

From the sales viewpoint, 2002 has been a tough year for Volvo Cars. Overall deliveries totalled about 400,000 cars. Sales have been dropping in the USA, but the market shares in Europe went up.

There are also positive signs when it comes to quality. Volvo was ranked as the best European brand, with a 5th place overall, in the latest J.D. Powers report. The product plan is continiously aggressive and the new models replacing the Volvo S40 and V40 will be introduced during 2003.

"Our long term target is still 600,000 cars a year. The road to get us there, however, will be somewhat longer than we initially planned. For 2003, the Volvo XC90 will help boost our sales. Together with the replacement for the Volvo S40 and V40, it will take us towards the 500,000 mark in the next few years," concludes Hans-Olov Olsson.

Keywords:
Sales Volumes, Corporate
Descriptions and facts in this press material relate to Volvo Cars' international car range. Described features might be optional. Vehicle specifications may vary from one country to another and may be altered without prior notification.
To view the full copyright information click here
Media Contacts
Related Images
Aug 08, 2002 ID: 7486 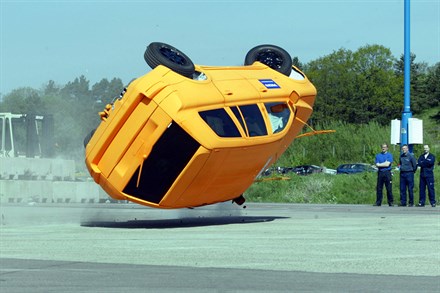