For 20 or so newcomers to Sweden, including a number of refugees, the practical work experience component of a new course began recently at Volvo Cars’ Torslanda Plant in Gothenburg.
"The company has a responsibility to society. We’ve talked about diversity for a long time, and now we’re doing something concrete about it," says Anna Fredriksson, who is process manager for recruitment and diversity at Volvo Cars Torslanda.

The course, devised for refugees and other immigrants who have not been long in Sweden, is a pilot project which began in April. Now the practical work experience component of the course has got under way at Volvo Cars’ Torslanda Plant. The first intake consists of around 20 people from 14 nations.

"At the end of the course, the students will be well-prepared for work in car assembly, but also for other challenges in the Swedish job market," says Anna Fredriksson.

The complete course will take individuals between two and four years to complete, depending on the extent of their earlier education. Besides practical experience of car assembly, they are given tuition in the related theory, and study Swedish, civics, mathematics and English at senior secondary school level in the classroom.
"The selection process included interviews and practical tests," says Anna Fredriksson. If the pilot scheme proves a success, it is likely to be continued on a bigger scale. Recent immigrants to Sweden are an increasingly important recruitment base for Volvo Cars.

For their work experience in the Torslanda Plant, each student has a personal mentor. In some cases the mentor will be someone from the same country as the student.
"With a mentor, the student is able to learn more about life and work in Sweden from someone who’s already familiar with the cultural differences," says Fredriksson.

Elias Saliba, 29, is one of the students. He arrived in Sweden from Lebanon eighteen months ago.
"This course is a fantastic chance to get a job quickly, but it could also be a stepping stone to other studies. We are learning Swedish, and about how Swedish society works," he says.

The situation in his home country meant that he never finished his secondary schooling there. He hasn’t ruled out the possibility of going on to university later.
"But that’s a question for the future. Right now I’m concentrating on completing this course and starting work at Volvo. I do like working with cars," he says.

Once a student has attained the level which Volvo requires for its car assembly workers, including a senior secondary school qualification in the core subjects and a knowledge of Volvo’s quality objectives and strategies, he or she will initially be offered employment for a trial period. All being well, this can later become a permanent job.

Volvo Cars Torslanda has a long tradition of employing immigrants. Today its workforce has a high degree of cultural diversity. Welcoming skilled immigrant workers has played an important part in the development of the plant.

"Having staff with highly diverse skills and backgrounds is something we see as a real asset. It’s important to us as a competitive company and an attractive employer," says Sven Eckerstein, Senior Vice President Human Resources at Volvo Car Corporation.

Facts:
This pilot training programme is a joint venture between Volvo Cars Torslanda, a senior secondary school (Göteborgsregionens Tekniska Gymnasium), an adult education organisation (ABF), a trade union (Metall) and the City of Gothenburg.The academic tuition is provided by Göteborgsregionens Tekniska Gymnasium, which is owned by Volvo Car Corporation, AB Volvo and the Municipality of Gothenburg.

Keywords:
Corporate, Manufacturing
Descriptions and facts in this press material relate to Volvo Cars' international car range. Described features might be optional. Vehicle specifications may vary from one country to another and may be altered without prior notification.
Media Contacts
Related Images
Nov 13, 2002 ID: 7591 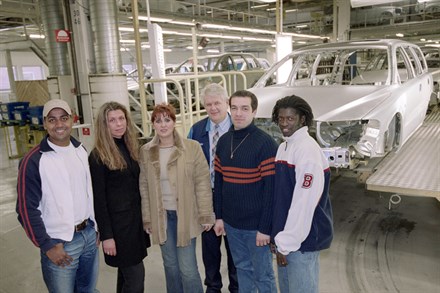