Hot rod with a Volvo heart

Leif Tufvesson is one of Sweden’s most skilled specialist car constructors, with many of his cars having received serious international acclaim.
The hottest of them all right now is the new Caresto V8 Speedster, a mid-engined car with an ethanol powered Volvo V8 unit. With the advent of the V8 Speedster, the term Sport Rod has been born. The car will be given its premiere public outing at the SEMA show in Las Vegas on October 31.

Leif Tufvesson, who in 2004 won the prestigious “Hot Rod of the Year” award from Hot Rod Magazine, now returns with a completely new car. Leif previously worked for the Volvo Concept Center, and for 6 years was responsible for the development department of the Swedish sports car manufacturer, Koenigsegg. He has now started to construct and manufacture his own cars. His cars have won innumerable prizes over the years and, among others, have received a great deal of acclaim at the SEMA Show in Las Vegas – the largest exhibition platform for specialist car constructors in the world.

The latest project is a mid-engine hot rod powered by a Volvo V8. The car is completely constructed in aluminum and carbon fiber with an advanced sports car chassis fitted with Öhlin shock absorbers. The question is whether or not this is a genuine hot rod that Leif has now built?

"Actually, it’s a sports car with a design idiom that is a further development of the classic Hotrod. Perhaps it could establish a new school of thought and coin the term Sport Rod. My idea was to build a car that was as much fun to drive as it was to look at. Road-holding characteristics have never been the hallmark of traditional hot rods," says Tufvessson.
The cars are designed with just this in mind – excellent road holding with an ideal 60/40 (back/front) weight distribution

The car is extraordinarily well built, with millimeter precision in every part of the bodywork. The leather interior is exquisitely crafted with a nostalgic retrospective feel. The steering wheel, instruments and gear selector come from Volvo, as does the V8 engine, the 6-speed automatic transmission and the car’s electrical system. The engine is tuned with the environment in mind, and has been converted to ethanol by Scandinavia's leading car tuning company BSR.

Leif Tufvesson has built and designed the entire car himself, though he has taken advantage of his wide contact network of sub-contractors in terms of paint finish, interior fittings and CAD-milling. Everything else is manufactured and assembled in his workshop in the old brickworks outside Ängelholm in the south of Sweden.

It has taken Leif less than two years to build his SEMA display car and one similar to it, which is residing back home. The two cars are identical, though in different colors. Leif and his company, Caresto, a name also sported on the grill of the car, had two objectives when building the cars: "On one hand the aim is to sell the cars and it is my hope to build at least six examples of this particular model. On the other hand it is, in fact, for my own enjoyment’s sake, because I love building cars. It’s my hobby and at the same time, it’s my job."

An interested buyer would have to be prepared to pay around 2.5 million Swedish kronor (approximately $338,000). But then, he would also have a tailor made and unique car, manufactured in extremely high-tech materials and with the high performance of an advanced sports car.

Many experts within the motoring world have praised Tufvesson for the high level of quality and attention to detail on his cars. The whole exterior and interior design has also received equal amounts of acclaim – an area where Leif has collaborated with car designer Per Gyllenspetz, who, with his 20 years of design experience, has guided the design.

A number of the car’s different components deserve special mention.  The removable composite hardtop is a great example of Tufvesson's craftsmanship. The three integrated rear-view cameras, the advanced techniques of the rear lights as well as the CAD-milled aluminum details such as wheel spindles, exhaust panel, interior details and the lamp housing for the Hella Xenon headlights. A detail such as the temperature controlled hood that opens automatically for additional cooling just shows how everything has been completely well thought through.

And finally, Tufvesson has also succeeded in producing an extremely inspiring exhaust note from Volvo’s new V8 engine. It sounds more racing than cruising, which is perhaps the hallmark of a real Sport Rod.

Descriptions and facts in this press material relate to Volvo Cars' international car range. Described features might be optional. Vehicle specifications may vary from one country to another and may be altered without prior notification.
To view the full copyright information click here
Media Contacts
Related Images
Oct 26, 2006 ID: 10321 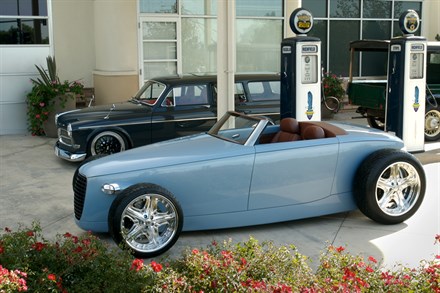 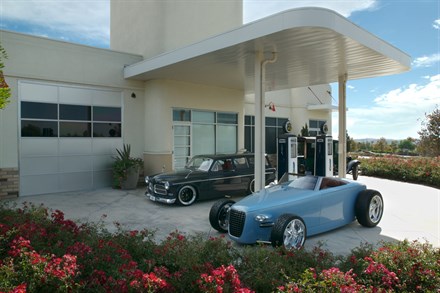 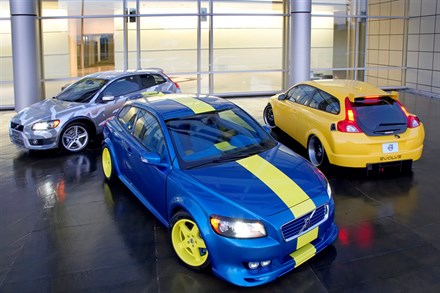