The introduction of the new Volvo C70 convertible has been a success.
Volvo Cars is now broadening its model range by making it possible to also enjoy top down driving with a sporty and fuel efficient turbo-diesel.
The Volvo C70 D5 is fitted with Volvo’s new, high-tech generation of the five-cylinder diesel engine.
High output and powerful torque provide a first-class driving experience at all speeds, and with low emissions.
“This is the debut for diesel engines in the C70, and we are taking a major step that makes the C70 even more interesting on the markets where diesel is the first choice of engines. We expect that every fifth C70 that rolls out of the plant will be diesel powered,” says Volvo Cars’ President and CEO Fredrik Arp.
The new Volvo C70 was unveiled at the Frankfurt Motor Show in 2005 and sales commenced at the beginning of 2006.
The initial sales target for the new C70 was just over 16,000 cars annually, but the positive reception has already led Volvo to raise expectations.
“The entire production for model year 2006 is already sold out. We have now increased the target to approximately 20,000 cars a year. The diesel’s competitiveness has contributed to our daring to raise the bar,” says Fredrik Arp.
The major markets for the Volvo C70 D5 will be Germany, Italy, Spain, France, Great Britain, and Belgium. Production will begin during the summer of 2006.

Specially adapted for the C70
The new D5 engine was initially developed for the larger Volvo cars (Volvo S60, V70, XC70 and XC90). It is built in Volvo Cars’ plant in Skövde, Sweden  and has been adapted for the more compact Volvo C70. It is the same engine, but with slightly lower output and torque. In addition to this, the engine installation and most of the auxiliary functions have been adapted to the C70’s smaller engine bay. For example, manifolds and the turbo-charger have been combined into one unit.
With the D5 engine, another dimension has been added to the experience of driving Volvo’s combined convertible and coupe. The Volvo C70 D5 becomes a viable alternative to the T5 model for those customers who prioritise driving comfort and fuel economy without sacrificing sporty performance.
The D5 engine has a cylinder displacement of 2.4 litres. Its maximum output is 180 hp (132 kW) and it offers excellent high-speed resources. Torque is a massive 350 Nm, which offers effective power and quick response at both low and high engine speeds. The Volvo C70 D5 accelerates from 0 to 100 km/h in 9,5 seconds (preliminary data).
Fuel consumption is moderate for a car with the D5 engine’s high performance. The preliminary figure for combined motorway/city driving is 7,3 litres/100 km. The engine will initially be mated to a five-speed, automatic gearbox.

Diesel comfort even with the top down
“The C70 offers a superb driving experience, not least for people who drive long distances,” says Patrik Widerstrand, who heads the C70 project. “Many customers who drive long distances prefer a car with a diesel engine, for driving comfort and fuel economy. Now, for the first time, we can offer this in a convertible. And we do it with a high-tech turbo-diesel that in most respects is perceived like a petrol engine, and which has plenty of power and is extremely responsive.”
The modern D5 engine has also been developed to offer an acceptable sound level, which contributes to a pleasant experience when driving with the top down.

Electronically regulated turbo compressor
The D5 engine has a turbo compressor from the latest generation, with electronic control for fast and precise regulation of the charge pressure. A large compressor wheel provides high torque and output. The variable vanes are angled for an efficient flow of gas and a high level of efficiency. This results in both quick acceleration and good high-speed performance.
The turbo housing is water-cooled, which is unusual in diesel engines. This provides continued cooling when the engine has been switched off. This is particularly important during short stops after driving at high speeds, such as when refuelling along the autobahn in Germany.
The electronically controlled turbo enhances power with no noticeable torque threshold, which contributes to good driving comfort.

Injection with variable rotation
The air swirls in the cylinders’ combustion chambers. A throttle is used to freely regulate air swirl, and combustion is very precisely adjusted to the driving situation and the current load on the engine. Large combustion chambers result in low compression, thereby providing both high performance and low emissions.
The injection system has injectors with seven nozzles. This results in a finely atomised fuel mixture and efficient combustion. Injection takes place in three stages: pre-injection, primary injection and post-injection. The last stage burns soot particles in the exhaust gases.
An electronically controlled glow plug system results in shorter glow times, making it easy to start the engine in cold weather.

High capacity management system
The D5 engine has the latest-generation management system, with high capacity and a great number of sensors that provide extremely precise control of the engine’s functions. Among other things, both the throttle and the Exhaust Gas Recirculation (EGR) valve are electronically controlled to precisely regulate the air supply and exhaust gas recirculation.
An EGR cooler lowers combustion temperature very effectively, and reduces emissions.
The catalytic converter is connected close to the engine to heat it quickly and start the cleaning process. It has been supplemented by an oxygen sensor that precisely regulates the fuel mixture and emissions.

Particulate filter is standard
The D5 engine has a particulate filter as standard equipment. It very effectively filters over 95 percent of soot particles from the exhaust gases. The filter is a CDPF – Coated Diesel Particulate Filter, which means that a special coating contributes to burning away particles. No additives are necessary and no service is required. Regeneration (the process of burning soot particles in the filter), which takes approximately 20 minutes, is done automatically at 500-1,000 km intervals, depending on driving conditions.
“The Volvo C70 D5 is a car for enthusiasts who want everything in one package,” says Patrik Widerstrand. “An attractive convertible that also offers a real roof, fantastic handling, and a driveline that combines high performance with power over the entire range of engine speeds – not to mention outstanding driving comfort and very competitive fuel economy.”

Two cars in one
Thanks to the power retractable hard top, buyers of the second-generation Volvo C70 can enjoy the car without compromise, with the top up or down. Volvo is one of the first on the market with a three-piece retractable hardtop.
“The new C70 is also one of the first open cars in the premium segment with both a retractable hard top and room for four adults. This combination has proven to be very attractive. We will win new customers who cannot decide between a convertible or a coupe. This offers them both cars in one,” says Fredrik Arp.

Collaboration with Pininfarina
Volvo has provided the design, while both development and production of the new open car have been done in collaboration with the prestigious Italian company Pininfarina. Some ten Volvo staff from Design, R&D, and Purchasing have been on site in Turin during the entire development phase.
Like its predecessor, the new Volvo C70 is being produced in the plant in Uddevalla, Sweden, which is now called Pininfarina Sverige AB.

Descriptions and facts in this press material relate to Volvo Cars' international car range. Described features might be optional. Vehicle specifications may vary from one country to another and may be altered without prior notification.
Media Contacts
Related Images
May 09, 2006 ID: 9929 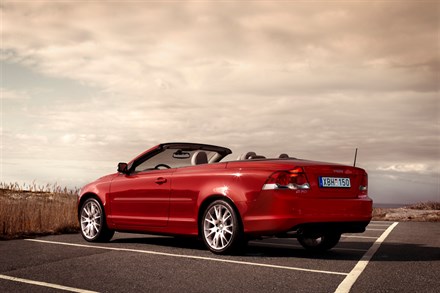 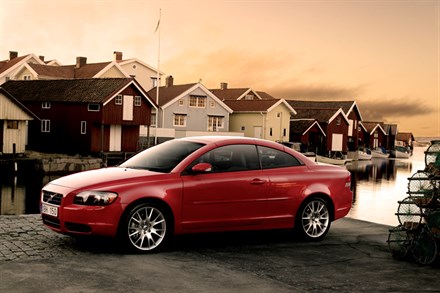