The Volvo XC90 rolled onto the SUV scene with a range of innovations that elevated the segment into an entirely new dimension.

Now, just over three years later, Volvo Cars is introducing an enhanced XC90 – with its sights firmly set on maintaining its lead.

“We are moving deliberately upward in the premium segment. In order to make the highly successful XC90 even more attractive, we have elevated the sensation of luxurious passenger-car comfort,” says Fredrik Arp, President and CEO Volvo Car Corporation.

The new XC90 is intended to strengthen Volvo Cars’ position in a SUV market that received the first XC90 generation with standing ovations.

“We have listened keenly to our customers and refined the cars to boost our competitiveness on both sides of the Atlantic. We already have a winning concept, so the aim was fine-tuning rather than making major changes,” says Fredrik Arp. “More sophisticated lines and materials and a better driving experience without compromising on demands concerning safety and power trains with good environmental properties,” continues Arp.

Continuing success
The Volvo XC90  is an enormous sales success for Volvo Cars. Its original production volume of 50,000 units was successively increased and in 2005, production of the XC90 in the Swedish Torslanda factory approached 90,000 units.

The new, enhanced Volvo XC90 will start production in spring 2006.  The USA will continue to be the model’s largest single market, accounting for 50 percent of total volume. This will be followed by United Kingdom, Germany, Canada and Spain.

New, highly advanced in-line six
The range of powertrains has been gradually enhanced over the past year or so with the introduction of three new engines.

A compact and energy-efficient V8 (315 hp, 440 Nm) and the upgraded five-cylinder D5 turbodiesel (185 hp, 400 Nm) with particle filter are now followed by an in-house developed in-line 3.2 litre six that was first introduced in the new Volvo S80. It is a highly advanced engine – with the same exterior dimensions and fuel consumption as a five-cylinder unit.

The engine is made mostly of aluminium and has a power output of 238 hp and torque is 320 Nm.  All the engine variants with the exception of the five-cylinder 2.5 litre turbo get a six-speed Geartronic automatic transmission and upgraded All Wheel Drive featuring Instant Traction.

“With state-of-the-art six- and eight-cylinder engines in the USA, we will appeal to a far broader customer segment. In Europe we can offer both diesel and petrol engines that meet increased customer demands for a combination of performance and environmental compatibility,” says Hans Wikman, Vice President Vehicle Line Large Cars at Volvo Car Corporation.

Alert response and high performance
The new straight six is designed to provide alert response and high performance in combination with excellent driveability, key factors for the driving experience offered by an SUV. At the same time, this engine is very fuel-efficient. And to contribute to a high level of protective safety, the engine has been given extremely compact dimensions and is installed transversely in the engine compartment.

An advanced valve train and variable intake system contribute to both good performance and exceptional fuel efficiency. The valve train has both VCT (Variable Cam Timing) and CPS (Cam Profile Switching) on the intake side.  With CPS (Cam Profile Switching) the intake valves can be lifted to two different heights depending on engine revs and load – a lower lift for economical driving and a higher one for more power. This creates virtually two engines in one.

The Variable Intake System (VIS) allows for volume adjustment of the intake manifold to suit the current driving situation, making it possible to extract maximum possible power throughout the engine’s entire rev range.

Compact format contributes to high collision safety
Despite the engine’s 3.2 litre displacement, it has been able to be made extremely compact. Owing to this, the engine takes minimal space fore-aft, thus helping to reduce the risk of intrusion into the passenger compartment in a collision.

The engine’s compact dimensions were achieved by positioning ancillary components such as the power steering pump and air conditioning compressor behind the engine in the space above the transmission. Drive takes place via gears at the rear of the crankshaft (READ – Rear End Ancillary Drive). The alternator is direct-driven and fitted on the engine block. Furthermore, the vibration damper, which compensates for vibration in the six-cylinder’s relatively long crankshaft, has been integrated inside the engine block.

Exterior with slimmer, more exclusive lines
One of the aims of the design changes on the new XC90 was to create a more modern and elegant appearance. This was achieved through a number of modifications including a new grille with more chrome and bumpers with a greater degree of colour coding. The tail lamps have been redesigned and the reflectors in the bumper are recessed within chrome trim surroundings.

All versions of the XC90 now have colour-coded side trim mouldings and door handles. New wheel-housing mouldings, partly painted in the car’s body colour, are available as an option. The door mirrors are partly colour-coded and now feature built-in turn indicator repeaters. At the same time, a new turn indicator function is being introduced: a quick push on the indicator stalk flashes the turn indicator three times.

Two new body colours, Electric Silver metallic and the XC90-unique Shadow Blue, provide added choice, as do the new Camulus 8 x 18 inch aluminium wheels. These wheels are unique to the Volvo XC90. All the aluminium wheels now feature the revised classic Volvo emblem in the centre. As an alternative to black roof rails, brushed aluminium can be specified as an option.

Interior with an elegant touch and wider range of choices
A number of changes have been made to give the interior a more exclusive aura. There are new colour combinations and a wider range to choose between.

To give a high-quality feel, new upholsteries are introduced. The most exclusive alternative is the new soft-leather Sovereign Hide upholstery with its contrasting seam stitching and panels in perforated leather. The centre console has been upgraded with a new display and aluminium-effect trim. New trim panels, with Sapeli Wood as an added version, give the customer a wider choice and impart an elegant touch to the interior. Additional options come in the form of a combined instrument with a watch dial-inspired design and an interior rear-view mirror featuring an integrated compass.

Upgraded RTI and world class audio system
What is more, the RTI (Road and Traffic Information) navigation system has been further developed. The new hard-disk-based system is faster and easier to use and provides more information than before.

The most advanced audio system, Premium Sound, includes a digital class D amplifier from Alpine with ICE Power technology from Bang & Olufsen Powerhouse, Dolby Pro Logic II Surround system and loudspeakers from Dynaudio – one of the world’s finest in the field. In the High Performance and Premium Sound systems, it is now possible to play CDs with music in MP3 and WMA (Windows Media Audio) format. All the audio systems are equipped with an extra input (AUX) for connection of external equipment.

An SUV offering unique levels of safety
“When the Volvo XC90 was being developed our aim was to offer exceptionally high safety levels to all occupants in the car,” says Hans Wikman. “All the test results indicate that we have succeeded.”

The Volvo XC90 is a modern SUV, built like a passenger car with a monocoque body, effective deformation zones, a low centre of gravity and advanced systems to minimise the risk of personal injuries, irrespective of the situation and accident type. What is more, the XC90 was equipped with several advanced systems to prevent accidents from taking place.  “With the launch of the new Volvo XC90 preventive safety is the primary area for further enhancement and we have focused on driver control,” says Hans Wikman.

Active Bi-Xenon Light – tracking headlights
In order to contribute to the best possible visibility when driving in the dark on twisting roads, Volvo Cars is launching Active Bi-Xenon Light – tracking headlight beams that follow the curvature of the road. A microprocessor is used to measure and analyse a number of parameters and optimise the light pattern to suit. The headlamps can be rotated up to 15 degrees in either direction, a total of 30 degrees, and can thus light up longer stretches of twisting road. To cut down on power consumption, the system is automatically disabled in daylight.

BLIS contributes to better driver control
The Volvo XC90 is also equipped with BLIS (Blind Spot Information System). Using cameras integrated into the door mirrors, BLIS registers whether another vehicle has entered the car’s offset rear blind spot. If so, a light comes on in the relevant mirror to alert the driver and help him or her make the right decision. BLIS can thus help the driver gain better control over the driving situation.

Park Assist Camera – an extra eye to the rear
In order to protect anyone standing behind the car and to aid parking, Volvo Cars is introducing the Park Assist Camera. This is an advanced system that not only gives the driver an extra eye to the rear, it also shows the planned track when reversing. A wide-angle camera shows the area behind the car. The image is displayed in the RTI screen above the instrument panel. The image angle is designed to show the entire area yet without excessive distortion. The picture also shows help lines that mark the area where the car will end up at the end of the reversing manoeuvre. These help lines change with steering wheel movement to assist the driver in steering correctly. Park Assist Camera is a fully-integrated function in the car. It is expected to be ready for delivery to customers in spring 2006.

“The changes we have made to the new Volvo XC90 can be regarded as precision tuning designed to increase the vehicle’s appeal still further,” says Hans Wikman. “We are aiming at a highly discerning group of car buyers and we want to give them an even better premium experience.”

Keywords:
XC90 (2002-2014), Safety, Quality, Design, 2007
Descriptions and facts in this press material relate to Volvo Cars' international car range. Described features might be optional. Vehicle specifications may vary from one country to another and may be altered without prior notification.
Media Contacts
Related Images
May 09, 2006 ID: 9926 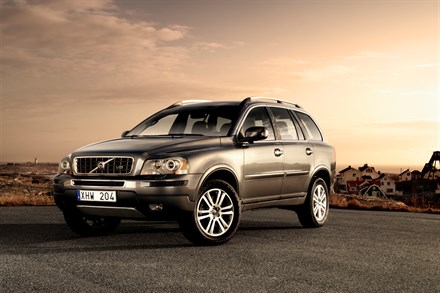 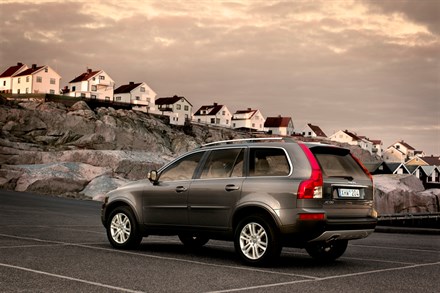 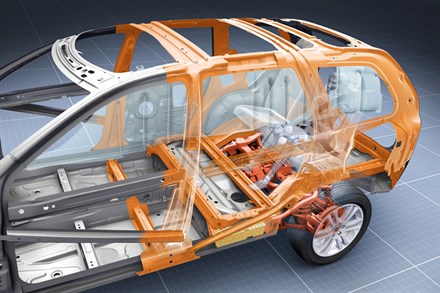 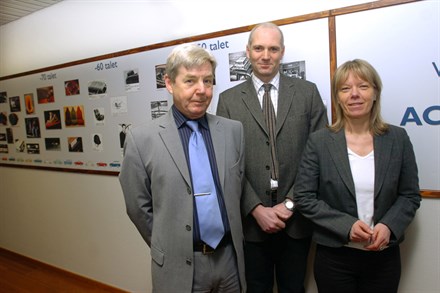