The all-new Volvo S80 - driveline, Performance and driving comfort in the premium class

Performance and driving comfort in the premium class

With the all-new Volvo S80, Volvo Cars is further reinforcing its position in the prestigious premium car segment.

Like Volvo's other car models, the Volvo S80 is designed for a transverse engine and front-wheel drive or All Wheel Drive. A transverse engine provides useful space for deformation in the engine compartment in the event of a collision, and also helps create a spacious passenger compartment. With a generous measure of creativity and advanced engine technology, Volvo has also succeeded in fitting the larger six-cylinder and V8 engines transversely.

The all-new Volvo S80 is the first of Volvo's sedan models to be powered by the compact, transversely mounted V8 engine that was first launched in the Volvo XC90. A unique design with a slim 60-degree angle between the cylinder banks makes this an extremely compact V8 engine. And by reversing the traditional offset of the cylinders and placing the left row ahead of the right, the engine has the optimum shape for fitting into the car's body structure. Furthermore, the entire engine is made of aluminium, which results in low weight and good fuel economy. A counter-rotating balancer shaft contributes to the steady rhythm of the engine.

The V8 engine is immensely powerful. A large displacement of 4.4 litres, power output of 232 kW (315 PS) and no less than 440 Nm of torque provide the power and high-speed performance needed for particularly enthusiastic driving. There's a massive 370 Nm of torque available around 2000 r/min - the most common rev range in everyday driving.

"With a powerful V8 in the S80, we can reach out to the most discerning of customers," says Derek Crabb, Vice President Powertrain at Volvo Cars. "In the prestige class, there are many buyers who would never consider any other engine alternative."

Furthermore, this is one of the cleanest V8 engines on the market. Four catalytic converters - two of which are positioned close to the engine - and a highly advanced engine management system contribute to quick start-up of the filtration process and reduce exhaust emissions to a minimum (satisfies ULEV II and Euro 4 requirements).

In order to improve fuel economy still further, the V8 engine has been equipped with variable camshaft timing as well as a variable intake system.

The Volvo S80 is also available with a six-cylinder performance engine, the T6. It is based on the immensely compact 3.2-litre in-line aluminium engine that was first launched in spring 2006. The T6 version has a displacement of 3.0 litres, producing 210 kW (285 hp) and no less than 400 Nm of torque. Maximum torque is on tap from just 1500 rpm and remains available all the way up the rev range, resulting in remarkably quick acceleration and smooth driveability.

The somewhat smaller cylinder displacement of the turbo engine, owing to the slightly narrower cylinder bore and shorter stroke, is compensated by the turbocharger which in this engine takes in exhaust gases in two stages, with the inflow divided into two lots of three cylinders each, a system known as twin-scroll technology. Twin-scroll technology permits use of a more compact and uncomplicated turbocharger and provides extremely swift response, fully on a par with that from twin turbochargers.

The high-efficiency six-cylinder in-line engine has a main structure made of aluminium and a larger displacement than its predecessor - 3.2 litres compared with the previous 2.9. Power output in the 3.2-engine is 175 kW (238 PS) and torque is 320 Nm.

The 3.2 features an advanced valve train and a variable intake system that contribute to both good performance and high fuel efficiency. Several innovative solutions have also made it possible to build the engine within extremely compact dimensions.

The valve train features VCT (Variable Cam Timing) and CPS (Cam Profile Switching) on the inlet side - two key elements in providing the engine with excellent driveability and flexibility.

With CPS (Cam Profile Switching) the intake valves can be lifted to two different heights depending on the engine speed and load.

In normal driving, with normal throttle opening and low engine revs, fuel consumption is modest at the same time that torque is sufficient to provide good driveability.

In more enthusiastic driving involving full throttle opening and high engine revs, the engine responds instantly to the accelerator and provides a massive thrust of power, both at low and at high speeds.

"In principle, Cam Profile Switching creates two engines in one," explains Derek Crabb. "We can unite widely differing demands on one and the same engine and easily meet the requirements of customers with entirely different wishes. Our focus is just as much on satisfying customers who prioritise performance as those who are more interested in driving comfort and fuel economy."

"With VIS we can exploit the engine's capacity to the maximum and extract the maximum possible power throughout the entire rev range," says Derek Crabb.

Like the V8 engine, the six-cylinder engine is mated to a six-speed automatic Geartronic transmission. It is engineered to handle the immense power produced by these engines. Geartronic allows the driver to change gears manually.

Despite the engine's 3.2 litre displacement, it has extremely compact exterior dimensions. The complete engine package is only 3 millimetres longer than Volvo's five-cylinder engine. The total engine length is 625 millimetres.

"A compact format is a matter of safety," explains Derek Crabb. "It is particularly important that the engine takes up minimal space longitudinally in the vehicle. The way we see it, a compact transversely installed engine is the best way of reducing the risk of intrusion into the passenger compartment in a collision."

The engine's compact format has been achieved by locating the ancillaries, such as the Power Assisted Steering Pump and Air Conditioning Compressor, behind the engine in the space above the gearbox. Consequently, there is no front-end drive of the ancillaries. Instead they are driven via gears by the rear end of the crankshaft. This engineering solution is known as READ - Rear End Ancillary Drive. The alternator is direct-driven and installed on the engine block. This solution means that the entire engine and transmission package takes up minimum space, particularly in the car's longitudinal direction.

By designing the drive system in the form of a small gearbox with an intermediate shaft inside the driveshaft - known as a Shaft In Shaft design - it was possible to ensure a very short package. The two shafts are driven by different gears that give them different speeds (one speed for camshaft drive and one for the ancillaries).

"It's a particularly compact solution that is the result of highly advanced development work," explains Derek Crabb.

The vibration damper, which compensates for vibration in the six-cylinder engine's relatively long crankshaft, has also been integrated into the engine block.

"All told, the new six-cylinder engine offers a premium experience in every respect," comments Derek Crabb. "This applies to its performance and fuel efficiency as well as its driving comfort and the sound of the engine. The fact that the engine's design also helps enhance safety isn't something the customer usually thinks about but it is naturally a key element in Volvo's product concept," he adds.

The all-new Volvo S80 can also be specified with Volvo's in-house manufactured five-cylinder D5 diesel engine. It is the recently launched second D5 generation, a very powerful and responsive turbodiesel which is provided in two versions. The most powerful engine delivers a huge 400 Nm of torque, and it is available across a very wide rev range.

Compared with the previous generation, the new D5 engine has been improved and refined extensively with a new electronically controlled turbo charger, refined multi-throttle injection technology and a very powerful engine management system. The improvements have resulted in an entirely new driving experience with considerably higher performance and improved drivability. At the same time, there has been a sharp reduction in emissions.

A particle filter requiring no service is fitted as standard, making the D5 a very environmentally efficient alternative.

"The D5 will be perceived as a lively petrol engine, only more powerful and more environmentally efficient," says Derek Crabb.

A five-cylinder petrol engine is also available as an alternative for the all-new Volvo S80. This engine has a light-pressure turbocharger and a power output of 147 kW (200 PS), with 300 Nm of torque. The engine is very compact, partly because the turbocharger has been integrated into the exhaust manifold. It is made of high-quality steel that withstands high exhaust temperatures and contributes to effective combustion and low exhaust emissions.

The Volvo S80 is also available with two four-cylinder engines - either a 2-litre naturally aspirated petrol engine with 145 hp or a 2-litre turbodiesel with 136 hp.

The 2.0 petrol engine has 145 hp (107 kW) and 185 Nm of torque. It is a four-cylinder, normally aspirated unit - a modern, lightweight aluminium engine featuring four-valve technology and a modern fuel injection system.

The 2.0D is a four-cylinder turbodiesel with 136 hp (100kW) and 320 Nm of torque. The engine has second-generation common rail technology - the same as in Volvo's larger diesel models. The cylinder head is made of aluminium. A Diesel Particulate Filter is fitted as standard.

A Flexifuel variant of the Volvo S80 is available from the end of 2007.It is powered by a four-cylinder naturally aspirated engine. The 2.0F has been modified for E85 and produces 145 hp (107 kW) and 185 Nm of torque.

During the first half of 2008, a five-cylinder 2.5-litre turbocharged Flexifuel engine with a power output of 200 hp will be introduced in the S80.

Flexifuel cars are run on E85, which is a blend of 85% renewable ethanol and 15% petrol. Ethanol is an entirely renewable fuel and can in principle be produced from just about any biomass source, such as corn, wheat, sugar-beet and cellulose. If the car is run on E85, emissions of fossil carbon dioxide, a greenhouse gas, drop by up to 80% compared with the same car running only on petrol.

Bioethanol and petrol are both filled in the same tank. The fuel hoses, valves and gaskets have all been modified to withstand the more corrosive properties of ethanol. The injection valves have been reinforced and are also larger, since more fuel is injected into the engine because of the lower energy content of E85 compared with petrol.

Moreover, the software calibration is updated for ethanol power. The engine management system precisely monitors the fuel mixture in the fuel tank and automatically adjusts both injection and ignition to suit.

Keywords:
S80 (2007)
Descriptions and facts in this press material relate to Volvo Cars' international car range. Described features might be optional. Vehicle specifications may vary from one country to another and may be altered without prior notification.
Media Contacts
Related Images
Jan 31, 2006 ID: 9690 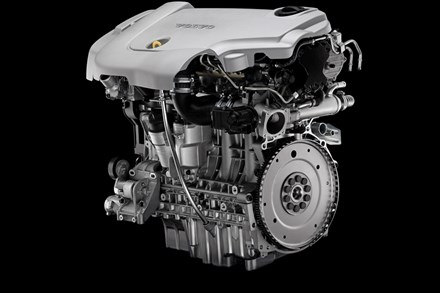 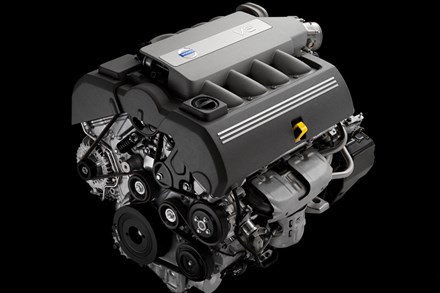 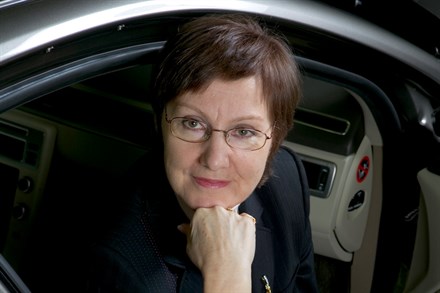 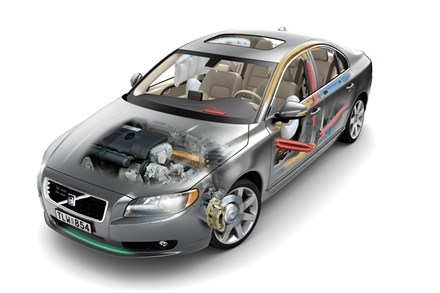