Volvo Cars is entering into collaboration with Britax, one of the market-leading manufacturers of child protection for cars. Two of Britax’s child seats for rear-facing installation with ISOFIX anchorages will be marketed by Volvo’s dealers. One of the seats is intended for infants (ECE R44 group 0+) and the other is for larger children up to 3-4 years of age (ECE R44 group 1). The seats have undergone a number of tests by Britax, and have also been crash tested in Volvo cars.

Britax seats complement Volvo’s range of rear-facing child seats. According to Volvo, sitting in a rear-facing seat is the safest means of transport for a child.
”We have studied nearly four thousand children who have been involved in accidents,” says Lotta Jakobsson, a traffic safety researcher at Volvo’s Accident Research Commission. And it is clear, according to Volvo Car’s research findings, that a rear-facing child seat contributes dramatically to reducing the risk of serious injuries to the child. Rear-facing seats have an injury-reducing effect of up to 90 percent (when compared to unrestrained children).

The purpose of a rear-facing child seat is to provide support for the head and the entire spinal column in a frontal collision. In other words, the collision forces are distributed over a larger part of the body.

”This is important since a small child has an anatomy that cannot withstand a great amount of force,” says Lotta Jakobsson. The head is large and heavy in proportion to the rest of the child’s body. A new-born baby’s head is half of its body weight. The neck is not sufficiently developed and is not strong enough for excessive loads in a frontal collision if the child is sitting in a forward-facing position.”

Crash tested in Volvo cars
One of the Britax seats in question has received a top rating in 2005’s comprehensive European consumer test of child seats (the other seat was not tested). The test was conducted in cooperation between European automobile clubs and user organisations.
In addition to this, and to Britax’s own testing, the seats have been fitted in Volvo cars and subjected to full-scale crash tests, after which they were assessed according to Volvo’s own rigorous safety standards. The tests included frontal collisions, and impacts from the rear and side.

“We wouldn't sell a child seat that did not meet our own safety requirements,” says Ingrid Skogsmo, head of the Volvo Cars Safety Centre. “However, the test results mean that we can recommend these child seats from Britax to Volvo customers with a clear conscience. They are an excellent complement to our own range of child safety products.”

ISOFIX base – a convenient base for quick and correct fitting. These Britax seats are fitted with the help of Britax’s specially designed base-plate. It can be used on both seats. It makes it very easy to fit the seat correctly. The ISOFIX base is first fitted in the car’s ISOFIX anchorages. Easy to see green markers show when the base is correctly fitted. The child seat is then attached to the base-plate. When the seat clicks into place in the base-plate, this is indicated by a green marker. In order to ensure sturdy installation, the ISOFIX base is equipped with a supporting leg that rests against the car floor, as well as a support plate resting against the car seat’s backrest.

Baby-Safe Plus ISOFIX – an infant seat (ECE R44 group 0+). It has an integrated, adjustable head support with cushioning sides that are designed to protect the child in collisions from the front or side. It can be adjusted to seven height positions as the child grows. A five-point harness with convenient one-hand adjustment makes it easy to snugly secure the child. Baby-Safe Plus ISOFIX is marked with ASIS – Advanced Side Impact System – which means that the seat has been specially tested with respect to extra protection in a side impact. As an alternative, Baby-Safe Plus ISOFIX can be used without the ISOFIX base and be secured using the car’s seat belts.

Fixway ISOFIX – a rear-facing child seat for older children, from about 9 months to 3-4 years (ECE R44 group 1). It has extra large side supports for the child’s head. The seat can be reclined to four different positions for the best possible comfort. This seat also has a five-point harness with one-hand adjustment. The shoulder belt can be attached at four different levels. The seat is marked with ASIS – Advanced Side Impact System.

Volvo Cars expects the new Britax child seats to be available at the dealers during the autumn of 2005. Volvo would also like to point out one cause of unnecessary injuries to children in cars.

“Our research findings show that the risk of injury increases when a forward-facing protection system is used for small children,” says Lotta Jakobsson. “Therefore, we advise all parents to let their children sit in rear-facing seats for as long as possible, at least until they are 3-4 years old.”

Keywords:
Safety
Descriptions and facts in this press material relate to Volvo Cars' international car range. Described features might be optional. Vehicle specifications may vary from one country to another and may be altered without prior notification.
To view the full copyright information click here
Media Contacts
Related Images
Mar 14, 2005 ID: 8995 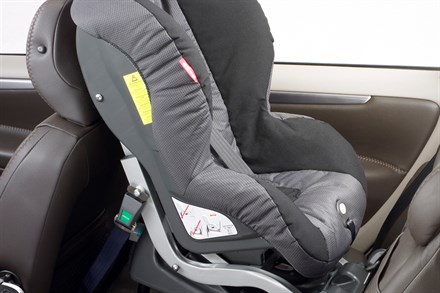