The new V8 model reinforces the Volvo XC90’s position as one of the most successful SUV models in the premium segment – and the new XC90 V8 is comfortable in all driving conditions, no matter if we are talking about hot deserts or the extreme winter above the Polar Circle.
The entirely new powertrain combines power and pleasure with a stable and predictable behaviour also in the toughest conditions.

The result is extremely low emissions before the catalytic converters are activated – which takes place just 15 to 20 seconds after the engine starts up.
“It is during these 15–20 seconds that the majority of the emissions of environmentally harmful substances take place,” explains Jörgen Svensson.
The 4-valve engine also features continuous variable inlet and exhaust valve timing (CVVT). This system adjusts the valve opening times so they suit the engine’s current revs and load conditions. The engine is thus utilised more efficiently, cutting fuel consumption, lowering emissions and increasing performance.

Distinct V8 sound
The Volvo XC90 V8 produces 315 horsepower and its torque – the most important characteristic of a V8 engine – is a massive 440 Nm at 3900 r/min. And at the sort of revs at which most driving takes place, around 2000 r/min, no less than 370 Nm of torque is at the driver’s disposal.
To increase the low end torque, the Volvo V8 has a valve in the inlet manifold that is closed below 3200 rpm. In this mode the air flow between the two cylinder banks is cut off, which creates a broader and more even torque curve.
“We chose to give our new V8 a sporty yet sophisticated appeal, with masses of power in reserve even as the revs rise,” explains Jörgen Svensson.
Acceleration from 0 to 100 km/h takes 7.3 seconds and fuel consumption is 13.3 litres/100 km (5-seater). Top speed is limited to 210 km/h (190 km/h in the USA).
The engine note is an important detail for buyers of a car with V8 power, and this is something to which Volvo Cars paid careful attention during the development of the new engine. In the hunt for that characteristic V8 rumble, it is the position of the inlet manifolds that is the main deciding factor.
“Our new V8 has just the right sort of charismatic off-beat V8 burble, but it is somewhat more muted in the European fashion rather than producing the more traditional meaty American throb. We feel this provides better audio comfort for the car’s occupants,” comments Jörgen Svensson.

New 6-speed automatic transmission
The power from Volvo’s V8 engine passes through an entirely new 6-speed automatic transmission dimensioned to handle the high torque. This unit too is of particularly compact dimensions so as not to interfere with the car’s overall structure. Sixth gear is a pure overdrive ratio to ensure quiet cruising and low fuel consumption.
“We get simply massive ‘take-off’ force with this auto transmission,” says Jörgen Svensson.
“And at the same time, it has a very sporty nature and does not change up in the middle of a curve, for instance, but instead stays in the same gear until the bend straightens out.”
The new 6-speed transmission is of Geartronic type, which means that it can also be shifted manually. There is also a possibility for Lock-up, and slipping Lock-up, on all gears.
To ensure the optimum balance between driving properties, performance and fuel consumption the engine and transmission are treated as one unit. This is achieved with new software developed by Volvo, called CVC (Complete Vehicle Control). CVC is part of the integrated software package used, both in the engine control module and the transmission control module.
Among the many benefits of this approach was the possibility of integrating an overdrive 6th gear while still maintaining good driving performance by adjusting functionality, gear and torque to suit current conditions.

AWD with Instant Traction™ – a world innovation
The third ingredient in the new Volvo Cars V8 powertrain is the electronic AWD four-wheel drive system, which now features Instant Traction™. This new technology – which Volvo Cars is the first automaker in the world to introduce –improves the scope for quick getaways and provides enhanced traction on slippery surfaces. It has been developed by the Swedish company Haldex.
A non-return valve allows us to use software to control the base torque that is programmed into the AWD system. When starting off from standstill, 80 Nm of torque is pre-charged in the system since the non-return valve prevents the unit from becoming totally drained of hydraulic fluid.
“This reduces the usual wheelspin  that the current system permits before the power is delivered to the rear wheels. This more rapid transfer of power to the rear wheels is very valuable in winter conditions, for instance when starting in deep snow” explains Jörgen Svensson.
The AWD system has also been upgraded to handle the power of the V8 engine. Maximum short-term torque at the rear wheels has been increased by 50 percent compared to current XC90.

Electronically controlled clutch
The All Wheel Drive system automatically synchronises the front and rear wheels to create maximum traction.
The power is distributed between front and rear via an electronically controlled multi-plate clutch. As soon as a front wheel tends to slip a fraction of a revolution, power is transferred to the rear wheels.
The system is intelligent.
A few examples:
If the driver brakes, or lifts the foot off the gas pedal, or the DSTC anti-spin system decides to cut in, the All Wheel Drive system knows what to do to help keep the vehicle stable, for instance by releasing the driving on the rear wheels.

Predictable driving in all conditions
“The basic Volvo philosophy is that the car should have a consequent, predictable behaviour, no matter if you drive on a straight motorway on a dry summer day, or if you want challenge the most gruesome winter roads”, says Jörgen Svensson.
The multi-link suspension in the rear is not just about comfort. The constant track contributes to a stable, predictable behaviour - and provides stable braking also in the curves thanks to a slight toe-in when braking
The relatively long wheel-base also helps provide a stable feeling.
The geometry in the front has been carefully balanced for quick, precise steering response. The ZF steering system gives light, distinct and controlled steering feedback.

TRACS for enhanced starting traction
The electronically controlled All Wheel Drive system on the Volvo XC90 V8 works together with the traction control system, TRACS.
TRACS operates independently on the front and rear axle.
It is a starting aid that works in low speeds. If one wheel starts to spin the brake cut in and slows it down to make sure that the wheel with the best traction gets the power. The aim is to get the best possible starting traction.

Volvo’s design department has also taken considerable care over the appearance of the engine itself.
The V8 is the first example of a new design language for the engine compartment in Volvo’s coming models.
“We want there to be no doubt that this is a V8, and a modern and technically advanced V8 at that. We therefore chose not to hide the engine beneath large covers but instead to enhance the V-configuration and the eight inlet pipes,” says Anders Myrberg, head of engine compartment design at Volvo Cars.
On the inlet manifold, Volvo’s classic ‘iron’ symbol can be clearly seen in relief against a background of brushed aluminium and complemented with an elegant V8 emblem.

Keywords:
XC90 (2002-2014)
Descriptions and facts in this press material relate to Volvo Cars' international car range. Described features might be optional. Vehicle specifications may vary from one country to another and may be altered without prior notification.
Media Contacts
Related Images
Aug 08, 2002 ID: 7487 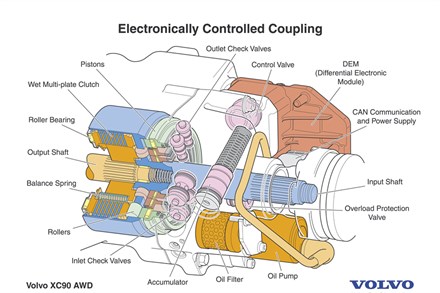 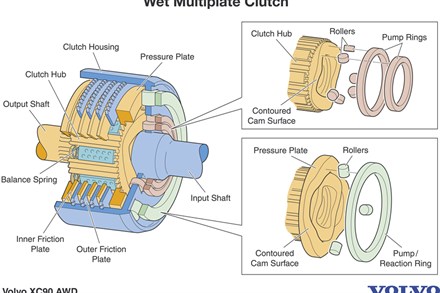