Volvo Car Corporation is creating a new paradigm in personal mobility for tomorrow’s consumers with the vehicle solutions it is dreaming up at its unique California-based Monitoring and Concept Center.

It’s 2010. Imagine leaving home for the morning commute to the office. Soon you’re whisking along the busy highway in a sleek, 2-person ultra-aerodynamic personal mobility vehicle, which uses little energy and rarely gets stuck in traffic. Science fiction? Not if the designers and engineers at the Volvo Monitoring and Concept Center (VMCC) in southern California get their way. They even have a name for their 21st century, ‘inline’ concept - Tandem – because the passenger sits comfortably behind, rather than beside, the driver.

“Maybe it sounds over-the-horizon, but consumer trend research together with our conceptual design and engineering work shows we could deliver that vehicle before 2010,” says VMCC science officer Ichiro Sugioka.  “Our competitors should be wary of the stuff we’re doing!”

The thinking behind the Tandem may appear far out, but that is the brief given by Volvo Cars to the small 15-20 strong team of designers, engineers and business developers working at VMCC.

“Our job is exploring the future and doing something really extraordinary,” says Lars Erik Lundin, VMCC general manager.
“The Tandem was originally conceived as a vehicle to help solve the specific over-crowding and pollution problems of southern California, but we soon realized it taps into how people work, travel and think almost everywhere in the industrialized world nowadays.”

The visionary designers, engineers and business mappers at the Volvo Monitoring and Concept Center believe they have conceived a dynamic paradigm-changing notion about how tomorrows consumers, from Los Angeles to Berlin to Shanghai, may choose to run or own or, even, not own cars.

The way forward is both provocative and practical, says Doug Frasher, strategic design chief. It will involve car buyers changing their thinking from one-car-fits-all-needs to a scenario “where people own different cars for different reasons, just as we have different clothes for different social events, suits for work, and jeans for play”.

Due to its unique narrow styling, Volvo’s Tandem concept uses 50 percent less lane space than a current car, yet provides Volvo’s traditional safety. The inline cabin, with both driver and passenger seated comfortably, would be equipped with a host of hi-tech display as well as active and passive safety systems, including sensoring equipment.

Adds Doug Frasher: “We envision a ‘family’ matrix of cars, starting with the commuting Tandem, that will spark a new paradigm in mobility, changing the way the world thinks about auto ownership in the same way the Sony Walkman did for the audio industry.”

Volvo’s fresh approach to solving today’s emerging traffic dilemmas is about individually sizing the car according to the specific need. The paradigm shift is about a consumer going for two cars instead of a big one, choosing small mission specific vehicles, and renting a larger one for holidays.

Volvo believes any new lightweight car must be fun to drive. “People will only change if they feel a sense of fun and enthusiasm with their driving environment – combine that with social responsibility and you end up feeling really good about helping Mother Earth as well,” says Doug Frasher.

Volvo’s radical ideas are the result of painstaking ethnographic research that started in 1998 into past and current trends among various consumer and other audiences, using wide-ranging techniques such as workshops, focus groups and customer panels.

“We created a timeline stretching from 1900 until 2010 with the aim of profiling future customers and the world they’d be inhabiting by understanding how trends emerge,” said Benny Sommerfeld, business development manager. “The timeline pinpointed likely future values, needs, desires and aspirations.”

Volvo’s study highlighted that consumer attitudes are becoming more homogenous due to factors such as the Internet and increasing global travel. Trend strategist Dirk Koring says findings on mobility issues in the US, Asia and Europe overlap substantially despite cultural and attitudinal differences.

“Increasingly we must appeal to people’s emotional sides. For Volvo, that means delivering safety and environmental care which is both functional and ‘cool’, and smart rather than flashy design. Concept cars have traditionally been a fantasy of an individual, but now we are creating imagination-stretching concepts based on solid appraisal of real-life customer expectations.”

Further evidence of the potential of Volvo’s new thinking was provided by research showing that over 77 percent of all trips in the US, for example, involve either one or two occupants -- and 90 percent of all commuting trips involve just the driver. The statistics for Asia and Europe are not dissimilar.

According to US accident statistics frontal impacts cause 50 percent of all fatalities and side impacts some 30 percent of fatalities. But, says Kolita Mendis, structures and safety engineering manager, the aerodynamic Tandem would be as safe as a large Volvo:

“We compensated the Tandem’s light weight with new occupant restraint concepts designed to handle frontal collisions with heavier vehicles. Also, the central positioning of Tandem occupants leaves ample room on either side to implement structural features mitigating the severity of side impacts. Our technical evidence is that Volvo would have no problem at all in delivering its traditional levels of driver and passenger safety.”

Will the Tandem ever see the light of day? According to Geza Loczi, VMCC design director, the Tandem is “a real product still in its infancy that needs a lot of molding and tweaking to grow into a full-fledged finished product.”

Keywords:
Design
Descriptions and facts in this press material relate to Volvo Cars' international car range. Described features might be optional. Vehicle specifications may vary from one country to another and may be altered without prior notification.
Media Contacts
Related Images
Apr 29, 2004 ID: 8468 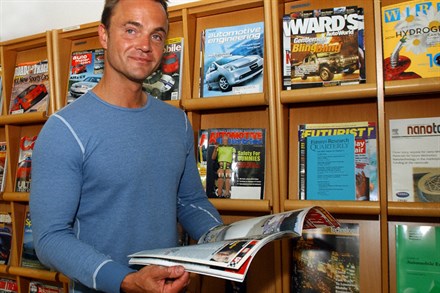 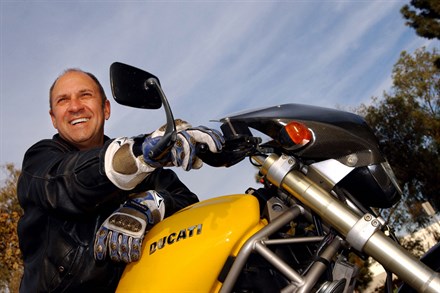