Volvo Car Corporation is distributing free reflectors around the world on World Heath Day, 7 April. The campaign is a symbolic action that demonstrates the importance to be visible in traffic and that small measures can improve road safety. At the same time, Volvo is continuing its long-term involvement in the traffic situation in Thailand in the ongoing TARC project.

Every day, over 3,000 people die on the roads, a number that corresponds to six full jumbo jets.
140,000 are injured, of which 15,000 are injured for life. These numbers are already serious, but that’s not all – they’re growing.
According to the World Health Organization, WHO, the number of people injured in traffic will have increased by 60 percent by the year 2020. An absolute majority of these accidents happen and will continue to happen in the low- and middle-income countries in the world.

Much can be done to make roads safer. But it takes money and planning to control traffic deaths. In many countries, road safety cannot keep up with the increase in traffic. There are more and more cars. Unprotected road users – pedestrians, cyclists, and motorcyclists, for example – are especially exposed on roads where there are no street lights, crossings or, or pavements.

To publicise the fact that traffic is putting an end to far too many lives, the World Health Organization has proclaimed a special world-wide road-safety year, under the slogan “Road Safety is No Accident.” The inauguration ceremony will take place in Paris in the presence of UN Secretary General Kofi Annan and French president Jacques Chirac on World Health Day, Wednesday, April 7. This is also the big day for Volvo Cars’ multinational reflector campaign, which will take place in countries with an especially high accident rate.

“For Volvo Cars, every day is a “road safety day.” We devote ourselves every day to analysing accidents – why they happen, how they can be avoided, and how injuries can be minimised. So of course we will observe a road safety day,” says Ingrid Skogsmo, head of Volvo Cars Safety Centre.

“At Volvo Cars we have always had an overall view of safety, and we know that everyone must cooperate in order get results. This means that the public must be trained and informed, officials must be motivated, and traffic planners must play their part. And naturally, we in the automobile industry must do everything in our power.”

On 7 April, Volvo Cars will distribute reflectors around the world to those most exposed to traffic: unprotected road users. The campaign will take place in Thailand, Turkey, China, Russia, Latvia, Ukraine, and in the Philippines, after dark – this will highlight what a big difference reflectors make.

“Often quite simple and inexpensive measures have the greatest impact. Like handing out reflectors. With increased visibility, much suffering could be avoided. By handing out reflectors in this way, we want to draw attention to an important measure, and we hope it will mean that reflectors will be used more widely from now on,” says Ingrid Skogsmo.

Facts about the Volvo Cars Visibility Campaign
Volvo Cars Corporation is publicising World Health Day, 7 April, with a multinational reflector campaign. In a number of large cities around the world, Volvo personnel will be located in places where there are many unprotected travellers after dark, and they will hand out nearly 70,000 reflectors – some snap-on reflectors, some stickers. This is an opportunity to make the public aware of how effective the use of reflectors is.
The campaign is a symbolic event that points out many things: That it is important to be visible in traffic. That small measures can improve road safety . And that Volvo Cars is concerned about safety for all road users. The campaign will take place in Thailand, Turkey, China, Russia, Latvia, Ukraine, and the Philippines.

Facts about TARC
TARC stands for Thailand Accident Research Centre, a road safety centre in Bangkok that was opened in February 2003. It is a joint venture between Volvo Cars, Thailand’s Department of Highways, and GRSP, Global Road Safety Partnership, a Geneva-based global organisation with representatives from the automobile industry, the Red Cross, and the World Bank. The purpose of GRSP is to reduce the number of injuries and deaths in traffic, with a focus on countries where road safety has not been a priority area up to now.
TARC is an accident research organisation, which uses the in-depth study method that Volvo Cars has been operating for a long time. With facts from actual traffic accidents, the accident research team is building up a research base. There, data are stored about drivers, vehicles, and traffic environments. In addition, it records how the accident site looked before, during, and after the incident – all in order to be able to learn more about how to prevent accidents.
One of the many questions that TARC is addressing just now is the extent to which seat belts are used in back seats.
The centre has five employees – technicians, civil engineers, and doctoral candidates studying road construction. They are given further training in traffic environment knowledge, vehicle technology and behavioural science. Exchanges of technicians and doctoral candidates between Thailand and Sweden are also planned.
TARC’s database and research will form a scientific basis for decisions by Thai officials on road safety issues. At the same time, Volvo Cars will receive valuable knowledge about traffic in developing countries; knowledge the company will put to good use when developing future models.

Facts about traffic in the world
In 1990, traffic injuries were number nine on the list of the causes that contributed most to the global burden of poor health. In the year 2020, it is calculated that traffic injuries will be in third place, with an increase in the number estimated at 60 percent, according to WHO. The burden falls heavily on low- and middle-income countries that, through increased traffic intensity, are soon responsible for 95 percent of accidents. In addition to the enormous human suffering, these accidents cost the low- and middle-income countries 65 billion American dollars. This corresponds to 1-2 percent of the countries’ GNP.
In Thailand alone, nearly 30,000 people die every year in traffic, and many hundreds of thousands are seriously injured . Most affected are unprotected road users. Motorcycles are involved in over 60 percent of the accidents.

Keywords:
Safety
Descriptions and facts in this press material relate to Volvo Cars' international car range. Described features might be optional. Vehicle specifications may vary from one country to another and may be altered without prior notification.
Media Contacts
Related Images
Apr 01, 2004 ID: 8371 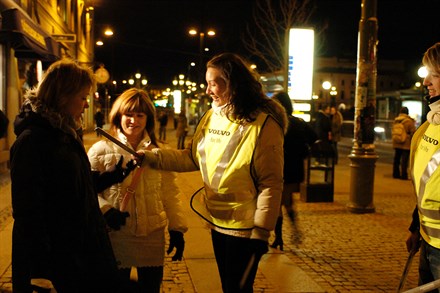 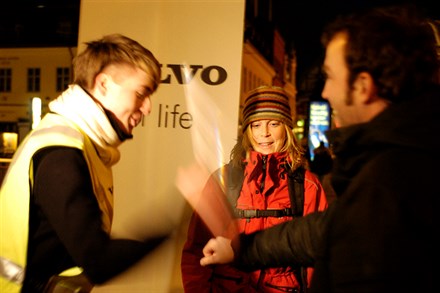