Thed Björk secured victory in the battle of Stockholm at Solvalla and headed a historic first 1-2-3-4-victory in the Swedish Touring Car Championship (STCC) for Volvo Polestar Racing.

"This is without a doubt one of my best victories ever! Everything has worked perfectly this weekend and to head home the first ever quadruple victory in STCC for Volvo is hard to describe," said Björk.

"The race in Stockholm became our best ever in STCC since we entered the championship in 1996 when it was formed. We are incredibly proud over Thed, Robert, Fredrik, Linus and everyone at Volvo Polestar Racing. The team has done an amazing job this weekend," said Derek Crabb, Motorsport Director of Volvo Cars.

Björk started from pole position and kept the lead from start to finish. BMW driver Fredrik Larsson put hard pressure on Björk at the start of the race, but was later disqualified for ignoring a penalty for hitting Linus Ohlsson.

Robert Dahlgren climbed to second place in the first part of the race after contact with BMW driver Robin Rudholm and had a stable race after that, crossing the line four seconds behind Björk in the end.

"I am very pleased with second. Rudholm tried to close the door far too late and we collided. The car worked really well after that and second means solid points for the championship," said Dahlgren.

Reigning TTA champion Fredrik Ekblom secured his first podium finish of the season with third position after a hard fight towards the end of the race with Volvo colleague Linus Ohlsson.

"I am happy over the podium finish which has given me good points for the championship. I am going to continue to push and climb the result list, you can write that down," said Ekblom.

22-year-old Ohlsson fought back to fourth after having been spun by Larsson in the first part of the race.

"I am of course disappointed to have been spun out from second, but that is racing sometimes and Larsson got a penalty. I had a strong pace in the race and I was close to Ekblom in the end. I didn't want to risk anything with a team mate and I stayed behind, but I know that I have the speed to win and that feels good ahead of Gothenburg," said Ohlsson.

Keywords:
Motorsport
Descriptions and facts in this press material relate to Volvo Cars' international car range. Described features might be optional. Vehicle specifications may vary from one country to another and may be altered without prior notification.
Related Images
Jun 10, 2013 ID: 49474 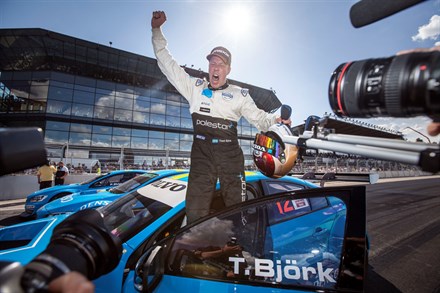 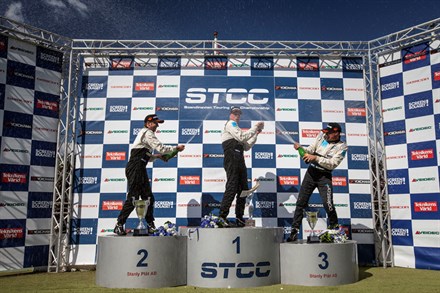