Volvo Car Corporation presents four new safety systems – two of them world-firsts – that will help further boost the company’s leading position in the world of safety. These advanced technologies are intended to contribute to enhanced safety in Volvo cars, both preventive and protective:
BLIS, which utilises digital camera technology to monitor the driver’s blind spot, is a breakthrough in the car world. Another breakthrough is the special variant of the inflatable curtain that has been developed for Volvo’s forthcoming convertible models.
In addition to these innovations, Volvo Cars has developed a couple of new systems for reducing rear-end impacts and accidents in traffic queues and tailbacks.

BLIS – Blind Spot Information System
Despite large window areas and effective rear-view mirrors, there is always the risk of blind spots when driving a car. These can cause incidents when driving, particularly when changing lanes.
In order to contribute to increased safety in such situations, Volvo Cars provided a wide-angle mirror on the driver’s side back in 1979 – the first car manufacturer to do so. The next step has now been launched, with a camera-based monitoring system that keeps watch for vehicles on the area alongside and offset to the rear behind the moving car. The technology was first shown in Volvo Safety Concept Car (SCC) in 2001.
When another vehicle enters the monitored zone, a warning lamp lights up near the door mirror. The driver gets a clear indication that another vehicle is just alongside his or her own, and can thus stay out of its way. The system alerts the driver both to vehicles approaching from behind and vehicles in front as they are overtaken. This information gives the driver better scope for making the right decision in such situations. Both sides are monitored in the same way.

The technology employed: A digital camera is fitted on each door mirror and takes a large number of frames a second. By comparing the picture frames, the system can register when a vehicle is moving into the monitored zone, which is 9.5 metres long and 3 metres wide. The system is programmed to monitor cars as well as motorbikes, in both daylight and in the dark. It is also dimensioned not to react to parked cars, roadside fences, crash barriers, lampposts and so on.
The system is active at all speeds above 10 km/h. It is designed to alert the driver to vehicles that are moving a maximum of 20 km/h slower and a maximum of 70 km/h faster than the driver’s own vehicle.

Inflatable curtain for convertibles
Volvo’s IC (Inflatable Curtain), introduced in 1998, helps protect the belted car occupant’s head in a side impact or rollover scenario. It has been developed for and is fitted as standard in Volvo’s sedan, estate car and XC models.
The IC is fitted in the inner roof edge and is activated out downward between the side window and the occupant’s head. This location has thus far made it impossible to fit the IC system in a convertible since there is no fixed roof for its installation.
Now, however, Volvo Cars has solved the problem by turning the inflatable curtain upside down and fitting it inside the door panel. In a side impact, the curtain will inflate and push itself upward. As in the roof-mounted version, this takes place within a split second in a smooth rolling or unfurling motion, so that the curtain can press itself between the side window and the head as effectively as possible.
The door-mounted inflatable curtain has an extra-stiff design that helps keep it upright. This rigidity has been achieved with dual vertical rows of cells that are somewhat offset in relation to each other.
The inflatable curtain is designed to offer protection even if the side window is open or broken. In order to offer protection even in the event of a rollover accident, the curtain deflates slowly.

Adaptive Cruise Control
The current generation of cruise control can contribute to relaxed and unstressed motorway driving under favourable conditions. However, the rhythm of traffic does not always permit use of the cruise control system.
In order to contribute to enhanced comfort and driver control even when the flow of traffic is variable and queues build up on the motorway, Volvo Cars has developed Adaptive Cruise Control. It continuously monitors the distance to the vehicles in front and automatically adjusts speed to maintain a proper safety distance.
The driver activates the Adaptive Cruise Control by setting the required maximum speed and selecting the minimum time interval to the vehicles in front. This time interval can be varied from one to three seconds. An interval of two seconds, for instance, means a safety distance of about 56 metres at a speed of 100 km/h. The distance varies with speed, and is about 39 metres at 70 km/h.
The system takes account of an overtaking vehicle that enters the line of traffic, thus breaking the queue. In a car with automatic transmission, the Adaptive Cruise Control can keep pace with changing traffic conditions all the way until it brings the car to a complete standstill.

The technology employed: A radar sensor in the car’s front continuously monitors the distance to the vehicle in front.
The system maintains a constant time interval to the vehicle in front by continuously adjusting engine power and activating the brakes as necessary.
The system is primarily intended to permit relaxed driving. The braking function only provides limited braking effect so as to avoid the risk of unnecessarily jerky progress.

Warning system with brake support and automatic brake activation
Rear-end impacts and collisions with vehicles at a standstill are common in today’s traffic. Much of the time, such accidents are caused because the driver is distracted and fails to react in time.
Volvo Cars has now developed an advanced system consisting of auxiliary functions that help avoid the risk of such accidents or minimise the effects if a collision still occur.

The system is activated in various ways at different stages of the accident sequence:
If the car approaches an obstacle that is either at a standstill or moving and the driver does not react, a warning lamp comes on and is reflected in the windscreen. At the same time, a buzzer is activated. In certain situations, this is sufficient for the driver to respond and avoid the danger.
When the driver presses the brake pedal, the system checks the pedal pressure. If the pressure should be inadequate to stop the car in time, the system cuts in and amplifies the brake application pressure. If the speed is not too high, this brake support can help avoid a collision.
However, if the driver does not react at all, the automatic braking function is activated, boosting braking pressure to stop the car. It may not be possible to avoid a collision, but the system helps to reduce the speed before the collision and thereby lowers the risk of serious consequences.
From a purely technical viewpoint, the system can be programmed to apply the brakes earlier and more firmly so as to attempt to entirely avoid a collision. However, this may have negative consequences in a situation where the driver would be able to get out of trouble by himself. What is more, much unnecessary braking would be able to be avoided in normal rush-hour traffic.

The technology employed: A radar sensor in the car’s front continuously monitors a section of the road in front of the car. If the distance to the vehicle in front is reduced drastically, the warning light and buzzers are activated. The warning light is seen in the windscreen as a row of brake light diodes.
With the brake support system, the existing EBA (Emergency Brake Assistance) system is activated, but earlier than normal.
The fully automatic braking function is activated without the driver having to press the brake pedal. For this function, the radar system has been supplemented with a forward-facing camera in front of the interior rear-view mirror. The camera covers a wider sector than the radar does, and helps define the type of obstacle encountered.

Introduced gradually
“We see these advanced systems as vital in our ongoing strategy of remaining world leaders in the field of safety,” says Lex Kerssemakers, Vice President, Global Marketing and head of product planning at Volvo Cars.
“What we are showing now will be introduced gradually in our cars. We expect to see BLIS in production already in 2004 (some time during model year 2005). The door-mounted inflatable curtain will be introduced in the next generation of convertibles. As regards the other systems, no decision has yet been taken on which Volvo model will first be equipped with them.”

Keywords:
S40, V50, Safety
Descriptions and facts in this press material relate to Volvo Cars' international car range. Described features might be optional. Vehicle specifications may vary from one country to another and may be altered without prior notification.
Media Contacts
Related Images
Dec 15, 2003 ID: 8149 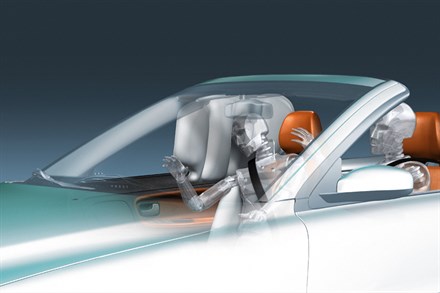 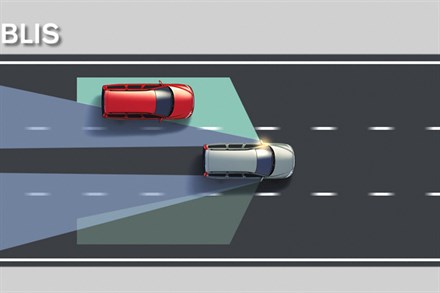 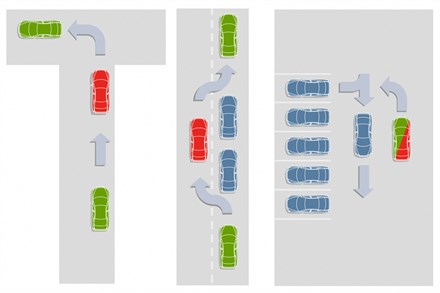 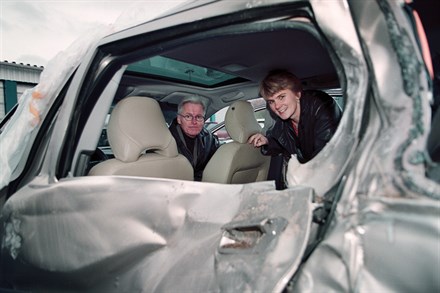