Five engineers at Volvo Car Corporation received the Henry Ford Technical Award (2003) for the design of the rear seats in the Volvo XC90. The group of five received the award for a unique technical solution that makes it remarkably simple to fold down all five rear seats to create an entirely flat load compartment floor.

The development of the Volvo XC90 placed a host of challenges in the path of the engineers. One of the most difficult, was to incorporate three rows of seats in a car that is just 65 mm longer than the Volvo XC70. The task was to find a technical solution whereby both the second and the third rows of seats could be folded simply and conveniently to create an entirely flat load compartment floor. The goal was also that children and adults of medium height should be able to sit in the third row of seats.

“Thanks to the fact that the Volvo XC90 has such generous interior space, we had the right preconditions for meeting the challenge. The transverse engine and the forward-located instrument panel mean we have more interior space at our disposal than our competitors do, which in turn means we could develop a very flexible interior,” says Leo Kullman, the project manager for the interior of the Volvo XC90.

The engineers were thus able to develop a solution whereby all the seats in the second row can slide fore-aft. Furthermore, they designed the seat cushions in the third row to tuck one behind the other when folded. This was a precondition for obtaining a low and entirely flat load compartment floor. Volvo’s engineers also invented a new method whereby the rear head restraints fold automatically and smoothly into recesses in the floor when the seats are folded.

It was equally important that folding the seats should be an easy task, and with just a couple of movements anyone can transform the car from a seven-seater into a load-lugger capable of carrying 1.8 m³ of luggage.

The engineers were also rewarded for the movable and integrated child seat in the second row and for the removable centre console between the front seats. The child seat in the rear middle slides conveniently forward so that parents in the front can maintain close contact with the child while travelling.

“During the development phase, we were constantly spurred on by views and feedback from potential customers. In the preliminary study, we examined the results of interviews with a group of American women who wanted a flexible car that can transport up to seven people. In situations where the driver is alone in the car with a young child, it was important to be able to maintain close contact with the child while driving. Our response was the integrated and movable child seat,” concludes Leo Kullman.

Photo:
Five happy Volvo technicians received the prestigious  – Henry Ford Award 2003 – because of the flexible interior solution in the Volvo XC90. Leo Kullman in the driver's seat, Morgan Larsson in the passenger front seat, Lennart Liedberg to the back in the second rear seat, Fredrik Eklöf in the right rear seat and in the third row is Anders Bell.

Keywords:
XC90 (2002-2014), Design
Descriptions and facts in this press material relate to Volvo Cars' international car range. Described features might be optional. Vehicle specifications may vary from one country to another and may be altered without prior notification.
Media Contacts
Related Images
Nov 25, 2003 ID: 8129 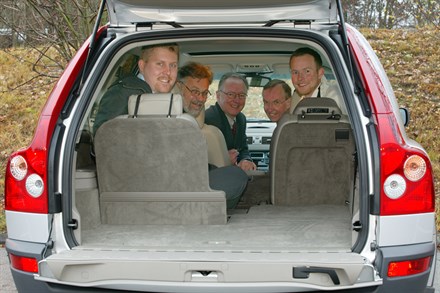