The new Volvo V50 shares the same philosophy and virtues as previous sportswagons from Volvo.
Strong emphasis on “sport” – as well as “wagon”.
The Volvo V50 is the perfect car for people who want a youthful, cool look. And it comes with a valuable “bonus” – the practical details and extra loading space.
The design language and the equipment level in the new Volvo V50 are also taking a step upwards – towards the larger estate model, the Volvo V70.
The new Volvo V50 is a genuine premium car, with properties that appeal directly to young families on the move. They have one or two children. They are active people looking for a premium car.
Our target is to sell 74,000 cars a year with the first deliveries early in 2004.
Like the all-new Volvo S40, the Volvo V50 will be built at the Volvo Cars plant in Ghent, Belgium.
When fully extended, the Ghent Plant will be the company’s largest production unit with an annual capacity of 270,000 cars.

The ultimate design icon of the new Volvo V50
The most distinctive feature inside the new Volvo V50 is the unique, super-slim, free-floating centre stack that elegantly links the tunnel console with the instrument panel.
The controls in the new centre stack have an ergonomic, functional design. Most of them are used for several functions, in a logical and convenient way. The top half of the control panel is used to operate the audio system, integrated phone and navigation system, while the lower half controls the climate system.
Behind the centre stack, there is a practical storage compartment for personal items, easily accessible from both sides.
Like the other panels in the car, the centre stack can be specified with different decor panels. The most spectacular is the transparent plastic, “IcedAqua”. It creates a high-tech impression, as parts of the electronics and technology can be seen through it.

A modern sportswagon
The rear of the Volvo V50 has a softer, more sports-oriented design than the very typical estate model, the V70. The combination of rounded roof lines and extremely abrupt tail is designed to create a modern, flair-filled impression.
This impression is reinforced by the softly rounded nose, the short bonnet and the marked cab-forward design.
The track and wheelbase have been extended, virtually putting a wheel at each corner. This also contributes to the sporty appearance, as well as giving the car stable on-the-road behaviour.
From above, the body resembles the shape of a boat, with a rounded prow, a broad midship and a narrowing stern. Together with the broad shoulders, this hull shape creates a compact, athletic impression, while contributing to the excellent aerodynamics.
The Volvo V50 is 46 mm longer than the new S40. The section behind the rear wheels has been extended and utilised to increase luggage space.

New, patented frontal structure with several crumple zones
The new Volvo V50 has very high safety levels – both protective and preventive. Volvo’s aim was to attain the same high safety level as in the Volvo S80.
The frontal body structure of the Volvo V50 is divided into several zones, each with a different task in the deformation process. The outer zones are responsible for most of the deformation. The closer the collision forces get to the passenger compartment, the less the materials used deform.
In order to give each zone the relevant properties, different grades of steel are used in different areas. Four different steel grades are used. In addition to conventional bodywork steel, three different grades of high-strength steel are employed:
High Strength Steel, Extra High Strength Steel and Ultra High Strength Steel.
The zonal system enables the collision forces to be absorbed in a highly ingenious and effective manner.

Compact engines contribute to crash safety
Efficient packaging has enabled the five-cylinder engines in the new Volvo V50 to be made 200 mm slimmer. As the engines are installed transversely, the reduced width creates greater space between engine and passenger compartment.
In a collision, the engine can be pushed no less than 150 mm rearwards before the crankshaft is stopped by the cross-member near the bulkhead.
The new Volvo V50 also shares the same type of interior safety system as that found on the larger Volvo models, including WHIPS (Whiplash Protection System), SIPS (Side Impact Protection System) with side-impact airbags and inflatable curtains.
The all-new Volvo V50 is 54 mm wider than its predecessor, the V40. This creates added space for deformation in a side impact.
Both rear outer seats can be fitted with integrated child booster cushions for children above three years of age.

Protection for other road users
The design of the new Volvo V50 has a front characterised by clean, smooth surfaces and rounded corners. The curves and panels are shaped to help reduce the risk of injury to pedestrians and cyclists in the event of an accident. Furthermore, the front has an energy-absorbing structure ahead of the bumper to help reduce the risk of leg injuries.
The bonnet and front wings are designed to absorb collision energy. This helps reduce the risk of head injuries. In addition, the compact new petrol engines leave a generous 70 mm of free space between the cylinder head and bonnet.

Unique Intelligent Driver Information System (IDIS)
The new Volvo V50 is equipped with IDIS – the Intelligent Driver Information System.
IDIS is a car industry innovation, first shown in the all-new Volvo S40. It is influenced by fighter aircraft technology. The system helps the driver to avoid being distracted while driving.
In demanding situations, such as overtaking or braking, signals from the integrated GSM telephone and certain peripheral information are delayed until the situation is calmer.
IDIS is standard in all versions of the new Volvo V50, irrespective of whether or not the car is fitted with an integrated phone.

Keyless Drive – key-less locking system
The Volvo V50 can be specified with a key-less locking/unlocking system. This makes it possible to open or lock the car and turn on the engine without using a key. In order to do this, the driver needs to carry what is known as a PAD (Passive Authorisation Device).
It is also possible to activate all the normal remote functions, such as follow-me-home lighting and the panic alarm, from a distance. As a result, the system offers complete freedom of action and swift access to the car in a threatening situation.
Volvo On Call is an option if the Volvo V50 has an integrated GSM telephone. In an accident in which an airbag or belt pretensioner has been activated, a signal is transmitted automatically to the CSC (Customer Service Centre), which can immediately locate the car and call for help.

Powerful engines for silky-smooth progress
The new Volvo V50 has transverse, five-cylinder, in-line engines. Most of the external engine components have been designed and packaged so that the installation takes exceptionally little space.
The result is an engine that is 200 mm slimmer and 25 mm shorter than that found in the larger Volvo models. This compact format makes the engine lighter. Combined with Volvo’s architecture – transverse engine installation – it also contributes to high crash safety.
The new five-cylinder, in-line engines have a displacement of 2.4 and 2.5 litres respectively. The five cylinders and large displacement provide high torque from low engine revs – along with swift acceleration.
The most powerful engine, the T5, offers a maximum of 220 hp and 320 Nm of torque. It can be combined with the same type of electronically-controlled All Wheel Drive as other Volvo models.
When it is launched, the new Volvo V50 will also be available with a choice of two five-cylinder, normally-aspirated engines (170 hp and 140 hp) – and an entirely new four-cylinder diesel engine (136 hp).
The turbo diesel has second-generation common rail technology featuring moving rails.
The injection system operates under immense pressure, ensuring extremely fine distribution of the fuel particles. This produces both good performance and low emission levels. The diesel engine can also be specified with a particle filter.

Transmissions from the R models
The six-speed manual gearbox developed for the Volvo S60 R and V70 R is now making its entry in the Volvo V50 T5.
The normally-aspirated engines are mated to a new generation of Volvo’s five-speed manual gearbox.
The automatic transmission for the Volvo V50 is the same as that used in the larger Volvo models. It is a five-speed unit with an adaptive gear-changing pattern; in other words, it adapts to the current driving style.
The turbo diesel comes as standard with a six-speed manual gearbox (not the same as in the T5 model). This contributes to swift acceleration owing to excellent pulling power in every ratio.

Chassis with the properties of a large car
The new Volvo V50 has been developed in the same spirit as the Volvo S60 and Volvo S80. The experience acquired from the advanced Volvo S60 R and V70 R formed the basis for the new sportswagon.
The five-cylinder powertrain laid the foundation for the large-car properties. Independent suspension with a multilink system at the rear provides a superb combination of comfort and consistent response. The wider track and longer wheelbase, compared with the Volvo V40, also contribute to the stable behaviour of the car on the road.
The steering is electro-hydraulic, with light, distinct and controlled steering feedback.

Careful selection of materials and technologies
The new Volvo V50 is built at some of the most up-to-date production plants in the world. The manufacturing methods, as well as the materials and substances used in production, are selected so as to minimise the risk to health, when it comes to both production personnel and people outside the plant.
The on-board technologies are designed for the minimum possible effect on the surrounding environment in the form of low emission levels.
Like all Volvo cars, the new Volvo V50 is designed for a high recycling rate.

Keywords:
V50, 2003
Descriptions and facts in this press material relate to Volvo Cars' international car range. Described features might be optional. Vehicle specifications may vary from one country to another and may be altered without prior notification.
Media Contacts
Related Images
Nov 06, 2003 ID: 8105 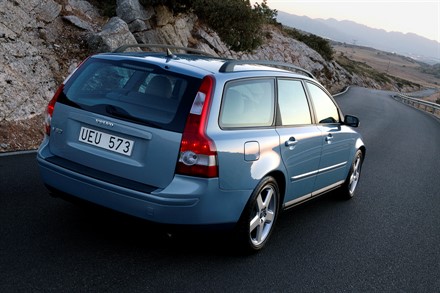 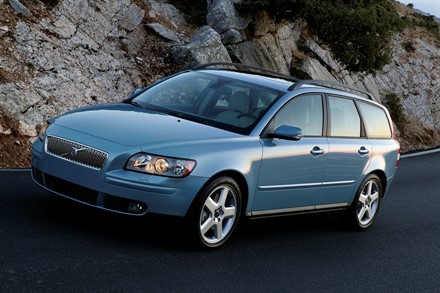 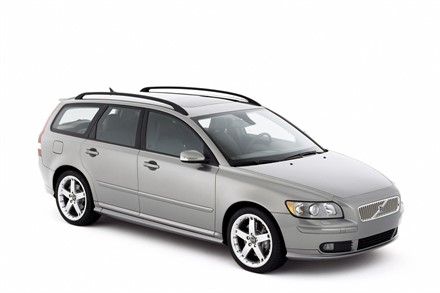 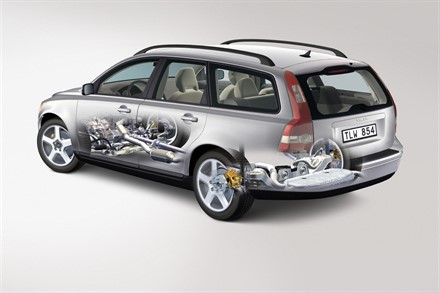