More people are considering smaller cars. But when it comes to premium car buyers there is one important catch
They don’t compromise. Meaning that they might go smaller, but they don’t want less.
The package must still include large-car properties; design, driving pleasure, comfort, technology, and of course in a Volvo, large-car safety.
So the designers and engineers behind the all-new Volvo S40 faced a tough challenge:
Take the core properties from the 4.82 metre Volvo S80 and squeeze them into the 4.47 metre all-new S40 – a car that actually is 48 millimetres shorter than the current S40!
This is the story about what they came up with.”

The ultimate design icon of the all-new Volvo S40
The exterior of the all-new Volvo S40 is an evolution of Volvo’s modern body design, while the interior is something of a revolution. The most distinctive new feature is the unique, super-slim free-floating centre stack that elegantly links together the tunnel console with the instrument panel.
This is an entirely new solution in the car industry, specially developed for the new Volvo S40 and previewed recently in the Volvo VCC (Versatility Concept Car).
The controls in the new centre stack have an ergonomic and functional design. Most are used for several functions, in a logical and convenient way. The top half of the control panel is used to operate the audio system and the integrated phone, while the lower half controls the climate system.
Behind the centre stack there is a practical storage compartment for personal items, easily accessible from both sides.

Shorter, wider and taller
The new Volvo S40 is shorter, but at the same time wider and taller, than its predecessor, creating more interior space. The bonnet is short and there is a pronounced cab-forward profile.
Viewed from above, the body resembles the shape of a boat hull, with a rounded prow, a broad midship section and a narrowing stern. Together with the broad shoulders, this hull shape forges a compact and athletic stance, and it also contributes to the car’s excellent aerodynamics.
The track and wheelbase have been extended, virtually putting a wheel at each corner. This contributes to the sporty appearance and gives the car stable on-the-road behaviour. The long wheelbase also makes it possible to fit conveniently wide rear doors.
The doors of the Volvo S40 are convex in profile, unlike the concave shape of the doors on the larger Volvo models. This convex curvature reinforces the compact appearance and enhances the cabin’s width.

New, patented frontal structure with several crumple zones
The all-new Volvo S40 is a compact car with extremely high safety levels – both protective and preventive. Volvo’s intention was to reach the same high safety level as in the large Volvo models.
The frontal body structure of the Volvo S40 is divided into several zones, each with a different task in the deformation process. The outer zones are responsible for most of the deformation. The closer the collision forces get to the passenger compartment, the less the materials used deform. The intention is that the passenger compartment should remain intact in most collisions.
In order to give each zone the relevant properties, different grades of steel are used in different areas. Four different steel grades are used. In addition to conventional bodywork steel, three different grades of high-strength steel are employed: High Strength Steel, Extra High Strength Steel and Ultra High Strength Steel.
The zonal system enables the collision forces to be absorbed in a highly ingenious and effective manner.

Compact engines contribute to crash safety
Owing to efficient packaging, the engines in the all-new Volvo S40 have been able to be made 200 mm slimmer. Since the engines are installed transversely, the reduced width creates greater space between engine and passenger compartment. In a collision, the engine can be pushed no less than 150 mm rearwards before the engine block comes into contact with the cross-member near the bulkhead.
The all-new Volvo S40 also shares the same type of interior safety system as found on the larger Volvo models, including WHIPS (Whiplash Protection System), SIPS (Side Impact Protection System), side-impact airbags and inflatable curtains. The all-new Volvo S40 is 54 mm wider than its predecessor. This creates added space for deformation in a side impact.
Both rear outer seats can be fitted with integrated child booster cushions for children above three years of age.

Stable driving properties
The body of the all-new Volvo S40 is 68 percent stiffer than that of its predecessor, thanks to advanced body design. This torsional rigidity contributes to stable, predictable and consistent behaviour on the road. The car’s chassis design, with its broad track and long wheelbase, also has a positive effect on stability.
The suspension is independent all round, with spring struts at the front and a multilink system at the rear. The rear suspension provides a certain degree of passive steering to counteract any tendency to skid.

Unique Intelligent Driver Information System (IDIS)
The all-new Volvo S40 introduces IDIS – the Intelligent Driver Information System.
IDIS is a car industry world novelty, influenced by fighter aircraft technology.
The system helps the driver avoid being distracted while driving.
When the traffic situation requires the driver’s full attention and concentration, for example when overtaking or braking, signals from the integrated GSM telephone and certain peripheral information are delayed until the situation is calmer.
IDIS is standard in all versions of the all-new Volvo S40, irrespective of whether or not the car is fitted with an integrated phone.

Powerful engines for silky-smooth progress
Despite its compact dimensions, the all-new Volvo S40 gets a transverse five-cylinder in-line engine – a unique feature in the compact class.
Most of the engine’s external components have been designed and packaged so that the engine installation takes exceptionally little space.
The result is an engine that is 200 mm slimmer and 25 mm shorter than that found in the large Volvo models. This compact format makes the engine lighter. Combined with Volvo’s architecture – transverse engine installation – it also contributes to high crash safety since there is added space for deformation in the engine compartment.
The new five-cylinder in-line engines have a displacement of 2.4 and 2.5 litres respectively. The five cylinders and large displacement provide high torque from low engine revs – along with swift acceleration.
The most powerful engine, the T5, offers a maximum of 220 hp and 320 Nm of torque. The Volvo S40 T5 will later become available in combination with All Wheel Drive.
The AWD version will be launched in 2004.
The all-new Volvo S40 will also be available with a choice of two five-cylinder normally aspirated engines (170 hp and 140 hp) – and an entirely new four-cylinder diesel engine (136 hp).

Chassis with large-car properties
The all-new Volvo S40 has been developed in the same spirit as the Volvo S60 and Volvo S80. The experience gained from the advanced Volvo S60 R formed the basis for the new compact model.
The five-cylinder powertrain laid the foundation for the large-car properties. The chassis technology was also obtained from the larger Volvo models. Independent suspension with a multilink system at the rear provides a superb combination of comfort and consistent response. The wider track and longer wheelbase, compared to the current Volvo S40 model, also contribute to the car’s stable behaviour on the road.
The steering is electro-hydraulic, with light, distinct and controlled steering feedback.

Keywords:
S40, Corporate
Descriptions and facts in this press material relate to Volvo Cars' international car range. Described features might be optional. Vehicle specifications may vary from one country to another and may be altered without prior notification.
Media Contacts
Related Images
Jul 18, 2003 ID: 7936 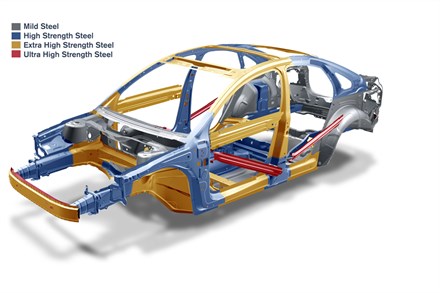 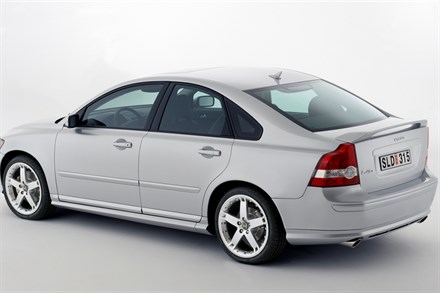 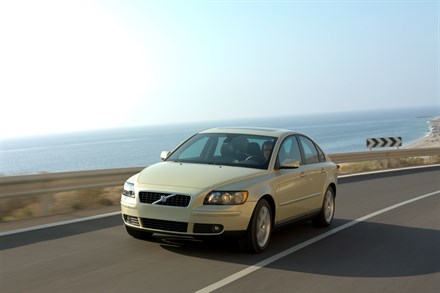 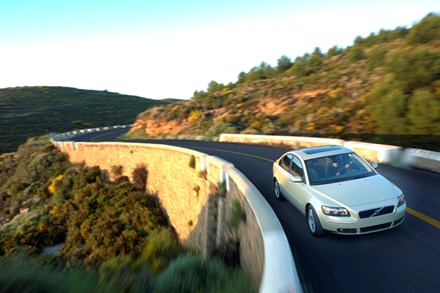