The Volvo XC90 has been awarded the highest rating – 5 stars – by consumer car safety organisation Euro NCAP in its latest survey.

Introduced in 2002, the Volvo XC90 is the single Volvo model to receive the highest number of international awards in the shortest period of time. Several of these have been safety awards, but the crash test, carried out by Euro NCAP, enabled the XC90 to physically prove its merits in an independent safety survey.
This was also done earlier this year when the US Insurance Institute for Highway Safety (IIHS) tested the XC90 and gave it top marks and the title "Best Pick".

Frontal and side impacts
The Euro NCAP test method evaluates the vehicle’s crash performance in a frontal impact and a side impact, including a collision with a pole. In both cases, several factors including child restraints are considered.
The protection provided by the latter was "very impressive, meeting all Euro NCAP performance requirements", according to the safety organisation.

The overall conclusion on the performance of the XC90 was as follows:
"The XC90 has an immensely strong body shell that provides a safe, well balanced occupant protection compartment for frontal and lateral (side) impact. Deformation and intrusion levels were minimal and the risk of chest injury from seat belt loads was low. The child restraints worked very well, meeting all the performance requirements, and all the different size ISOFIX seats available can be accommodated. Pedestrian protection for this size of car was average".

According to the Euro NCAP test method, there is minimal deformation of the footwell and door aperture and minor displacement of the pedals in the frontal impact, and slight risk of injury to the driver’s and front passenger's knees.

In the side impact, the dummy readings were among the lowest recorded by Euro NCAP. The SIPS bag, airbag and Inflatable Curtain worked well in protecting the driver both in the side impact and the pole test.

Addressing the SUV problem
When planning and designing the XC90, great attention was paid to the "typical" and critical SUV areas of vehicle-to-vehicle compatibility and rollover accidents in order to build an SUV that would reduce this problem.
Rollover prevention through roll stability control and rollover protection is a vital part of the XC90's active and passive safety systems. The vehicle has accordingly been widely acclaimed for its innovative safety solutions such as the Rollover Protection System (ROPS) and the Inflatable Curtain (IC) that protects all occupants in the vehicle including those in the third row of seats.

Together with systems like the anti-whiplash WHIPS system and seven belt pre-tensioners, the XC90 offers an unmatched level of occupant safety. Much of this, however, is not taken into consideration in the current evaluation methods used by Euro NCAP.
So in short, the result of the Euro NCAP test method is an example of how parts of some of the safety systems in the Volvo XC90 perform in two types of crash.

Keywords:
XC90 (2002-2014), Safety
Descriptions and facts in this press material relate to Volvo Cars' international car range. Described features might be optional. Vehicle specifications may vary from one country to another and may be altered without prior notification.
Media Contacts
Related Images
Jan 07, 2002 ID: 7231 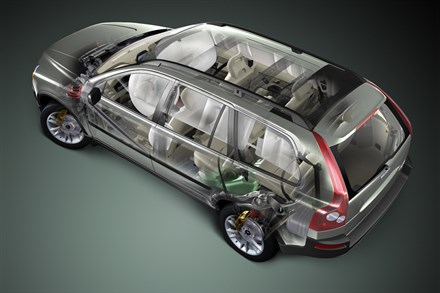 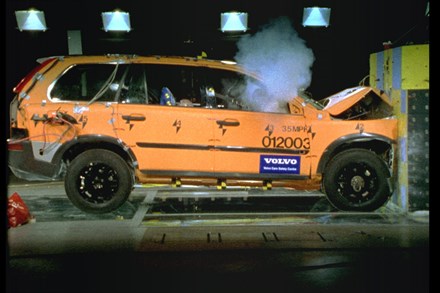