Ekblom and Björk one-two in this years' toughest and most eventful race. Lead extended in all three championships.

Last Saturday, the Touring Car Team Association Elite Racing Series visited Karlskoga for the fifth race of the season and it turned in to a great day for all Volvo Polestar fans.

If the first half of the season mostly displayed clean and tactical driving, this was nowhere to be found where the second half of the season kicked off. On top of that, shifting weather conditions made both the qualifying and the race even more eventful.

Fredrik Ekblom showed good form straight away and claimed pole. Thed Björk secured a fifth position on the grid, while Robert Dahlgren and Tommy Rustad had to abort their very last attempts as the qualifying session was red-flagged following a competitor going off the track with less than a minute left of the session. The result was tenth and eleventh on the grid respectively.

Ekblom made the most of his starting position. He took the start and kept his lead through the finish line. Björk lost a position in the start but reclaimed the same and four more. He chased Ekblom during the last laps for the lead but crossed the finish line as second.

"This must be the race of the year! A big thanks to the team, our engineer Jan Andersson gave us a perfect car. I wasn't able to catch Ekblom, but securing a double victory with him for Volvo feels great," said Björk.

Dahlgren and Rustad got a much tougher journey from their respective starting positions and exchanged quite a lot of paint with the competitors. When the checkered flagged appeared, Dahlgren had fought his way to a fifth place while Rustad, with a car in a very different condition as when he started the race, could claim eleventh place.

With the results from this weekend, Volvo Polestar extended their lead in the drivers, team and manufacturer championship. Three ore races remain now in this years´ TTA-series and next up is Anderstorp on September 1.

For more information about the team, please visit http://www.volvopolestarracing.com/

Keywords:
Motorsport
Descriptions and facts in this press material relate to Volvo Cars' international car range. Described features might be optional. Vehicle specifications may vary from one country to another and may be altered without prior notification.
Media Contacts
Related Images
Aug 20, 2012 ID: 45427 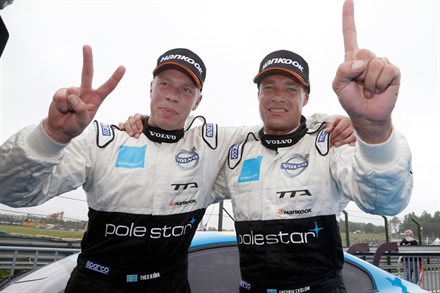