China launched its first ever sole entry in the Volvo Ocean Race on June 17th and announced that one of the world's leading sailors would helm its Team Sanya for the gruelling nine-month, 39,270 mile challenge beginning in October.

Despite its huge technical and financial resources, the world's most populous nation has never won a round-the-globe sailing competition but intends to make the breakthrough with the recruitment of New Zealander Mike Sanderson as skipper.

Sanderson, 40, is a twice-winner of the Volvo Ocean Race and will chase a hat-trick of triumphs with a crew mixing experienced sailors with relatively raw Chinese members.

It is the seventh world-class contender to join this year's race with Sanderson going head-to-head with some of the sailing's biggest names including American Ken Read (PUMA) and France's Franck Cammas (Groupama).

"This is a fantastic opportunity to race under the flag of such a great country and culture," said Sanderson at the Team Sanya launch in central Beijing.

"We are building up a strong team and are ready to take on this exciting challenge. Our approach will be one of compelling intent, working fast and smart, representing this great country and team with ambition, dynamism and colourful energy."

China, as is the case in many sports, has incredible potential within sailing and a win in the 38-year-old Volvo Ocean Race, previously established as The Whitbread Round the World Race from 1973, would be a huge boost to its ambitions.

The race is regarded as sailing's leading test for monohull yachts. It runs from 29 October in Alicante, Spain to 8 July next year in Galway, Ireland, the longest, continuous sporting event.

It visits all the continents of the world with Sanya in China hosting a port stopover from 4-19 February. Other stops include Cape Town, Abu Dhabi Auckland, Itajai (Brazil), Miami, Lisbon, and Lorient (France).

Li Quanhai, Vice Chairman of the China Yacht Association said: "China is a sports power and has abundant marine resources. Our involvement in top sailing events, such as the Olympic Regatta and the Volvo Ocean Race, greatly improves the development of China's water sports.

"This will be the seventh entry for the next edition and will not only bring a competitive yacht to our first class field but also will allow China to build on its already large sailing following.

"Team Sanya will allow the Chinese sailing fans to connect with the Volvo Ocean Race again and will be an amazing platform to engage with new audiences and attract potential tourists to Sanya and China itself."

The Deputy Mayor of Sanya, Wu Yanjun, said the city would directly benefit from this opportunity. "Hosting world class events like the Volvo Ocean Race will directly improve our sailing and yachting related facilities.

"We can also use this opportunity to enhance our profile as a top tourist destination, showing our ability to host and manage world-class events. Team Sanya will be an ideal ambassador to promote Sanya and Hainan around the world."

Known as the "Hawaii of the Orient", Sanya city of China's Hainan island province stood out from the competition to become one of the 10 ports to welcome the fleet in 2011-12.

The exact location of the stopover is Luhuitou Bay, where construction is expected to finish in August 2011. When completed, the facility will be a world-class marina.

China was previously represented in the race but its boat Green Dragon was a jointly backed venture for the 2008-09 edition with Ireland.

There will still be an Irish flavour to the Team Sanya challenger with Discover Ireland, promoting Irish tourism, renewing its commitment as a secondary sponsor.

Helly Hansen, one the world's leading outdoor performance clothing providers from Norway, will be the Official Clothing Partner to Team Sanya, providing the team's entire clothing needs for racing and onshore.

The Sanya-based Blue Ocean Protection Association will conduct onboard environmental-protection initiatives while spreading the philosophy of protecting the oceans everywhere they visit.

Full press information can be read and downloaded from
http://press.volvooceanrace.com

Visit www.volvooceanrace.com for all the latest news!

Keywords:
Special Interests, Sponsorship
Descriptions and facts in this press material relate to Volvo Cars' international car range. Described features might be optional. Vehicle specifications may vary from one country to another and may be altered without prior notification.
Media Contacts
Related Images
Jun 20, 2011 ID: 38842 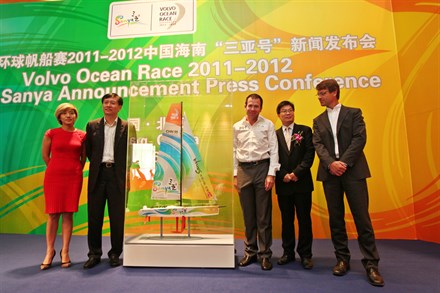