James Thompson had his best ever STCC (Scandinavian Touring Car Championship) weekend and climbed to fifth in the championship after a strong podium finish in the first race in Gothenburg.
"I am pleased with the results from this weekend, it was a good comeback compared to the two past races," said Thompson.

Thompson was just 14 thousands of a second from pole position in the qualifying session and says that Volvo Polestar Racing has taken a big step forward with the car.

"Credit to the team, the car was really strong this weekend and much more to my liking," said Thompson.

Tommy Rustad managed to score 18 points despite a tough qualifying session and the Norwegian is currently third in the championship.

"We scored valuable points and bearing in mind that we have not raced in wet conditions since 2008, I think that the weekend overall was okay," said Rustad.

Volvo Polestar Racing strengthened the team's championship lead and Thompson is optimistic about the upcoming races at Falkenberg in two weeks.

"The short term goal is a strong weekend in Falkenberg and with a good result there, we will get the opportunity of a really good position regarding the rest of the season," said Thompson.

For more info about racing: http://www.polestar.se/en/

Keywords:
Motorsport
Descriptions and facts in this press material relate to Volvo Cars' international car range. Described features might be optional. Vehicle specifications may vary from one country to another and may be altered without prior notification.
Related Images
Jun 20, 2011 ID: 38838 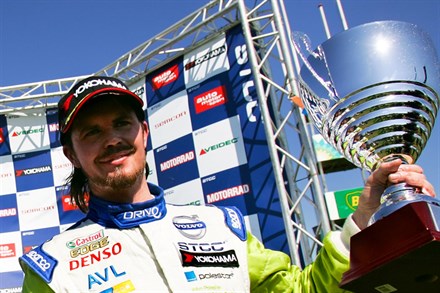