The draw for the 2011 Volvo World Match Play Championship at Finca Cortesín, Spain, May 19-22, is announced with 24 of the World's best players divided up into eight tantalising groups for the first two days of match play. With the World's top three players headlining the field for the first time in Spain, the field includes six of the leading nine players in the World, all four current Major Champions and  players from14 nations.

Over two thirds of the field is ranked within the World's top 50 and the Championship ranks amongst the strongest in Europe this year with over 50 OWGR points on offer.

Lee Westwood, the Number One seed and 2000 World Match Play Champion, tops the "Seve Ballesteros" group and will play Denmark's Anders Hansen and Australia's Aaron Baddeley in the group stage to be completed over Thursday and Friday as the players strive to reach the last 16 on Saturday.

Luke Donald, who hasn't finished outside of the top 10 since he won the Accenture World Match Play Championship, will be a fearsome opponent for defending Champion Ross Fisher and America's Ryan Moore in the "Mark McCormack" group, having reached a career high ranking of number two in the world courtesy of his 4th place finish at last week's Players Championship.

World Number three, Martin Kaymer, will take on Korea's best in the form of YE Yang and Seung-yul Noh in the "Arnold Palmer" Group and World Number 5 and 2010 US Open Champion, Graeme McDowell, will go head-to-head with the 2010 Open Champion Louis Oosthuizen and Jhonattan Vegas in the "Ian Woosnam" Group.

Winner of the 2006 World Match Play Championship and the 2011 Volvo Golf Champions, Paul Casey, will take on fellow big-hitter, Spain's Álvaro Quiros with Søren  Kjeldsen in the "Greg Norman" Group.

Ryder Cup team mates, Francesco Molinari and Ian Poulter are pitted against the experienced 1999 Open Champion and winner of the 2011 Open de Andalucia, Paul Lawrie, in the "Gary Player" Group.

Per Ericsson, President of Volvo Event Management - Golf, added, "We are very excited now that we can see the draw laid out. The eight groups look fantastic and there will be no end of intriguing matches for the spectators here at Finca Cortesínand fans around the world to enjoy. The qualification criteria has delivered us a truly world class field and Finca Cortesín have provided the picture perfect stage so now we  are looking forward to watching the drama unfold."

Guy Kinnings, Managing Director of IMG Golf, EMEA said, "With over two thirds of  the field ranked within the World's top 50, this week's Volvo World Championship could be a pivotal one for all the players at the top of the rankings. The  match play element offers the possibility of so many intriguing match ups that I think this could be one of the most interesting weeks in the tournaments 46 year history."

Vicente Rubio, Managing Director of Finca Cortesín concluded, "We are so proud to be hosting this world class group of players here at Finca Cortesín including the top three ranked players in the world. We are looking forward to welcoming them to Finca Cortesín . Everything is ready and Ignacio Soto, our Head Greenkeeper, has done a fantastic job in ensuring the course is in perfect condition so now we are looking forward to seeing how they tackle the course and especially the recently extended run-off areas around the greens."

Keywords:
Life Style, Events/Activities, Special Interests
Descriptions and facts in this press material relate to Volvo Cars' international car range. Described features might be optional. Vehicle specifications may vary from one country to another and may be altered without prior notification.
Media Contacts
Related Images
May 17, 2011 ID: 38204 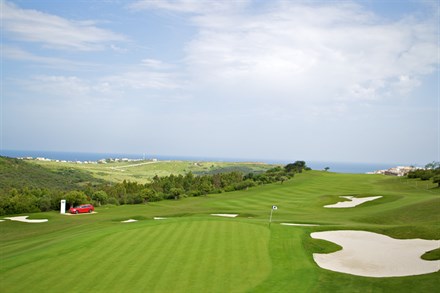