Volvo Car Corporation's emergency brake assist systems can save lives. Proof of this came in a comparison test that ADAC has conducted. ADAC, the largest automobile club in Europe, has for the first time tested emergency brake assist systems from six major car-makers in different collision situations and has noted clear differences in how they respond. The Volvo V60 system was the only one to achieve a "very good" rating and was the clear winner in the comparison.

Volvo Car Corporation offers various emergency brake systems for its models. The Volvo City Safety System is fitted as standard to six Volvo models, while the "Collision Warning with Full Auto Brake and Pedestrian Detection system is available as an option. Both systems were classified as very good in the ADAC test in which a Volvo V60 was entered.

"The Volvo V60 wins the comparative test and is the only one to obtain a very good rating. The autonomous braking just before a collision greatly reduces impact energy, so that the severity of the accident is mitigated. The City Safety System can even completely prevent collisions at low city speeds. In addition, the Swedish system achieves convincing results with its good collision warning and effectively acting automatic brake support," says Dino Silvestro, vehicle test project manager at ADAC's Landsberg Technology Centre, which conducted the test.
The tested cars were: Volvo V60, Audi A7, Mercedes-Benz CLS, BMW 530, VW Passat and Infiniti M37.

The explanation of the reasons for the test result goes on to say that: "The emergency brake system of the Volvo V60 substantially reduces speed and therefore the impact energy against a stationary vehicle if the driver fails to respond in time - the accident turns out to be far more minor. Someone driving in city traffic can therefore largely avoid a collision. The Swedish vehicle's warning system also performs convincingly. Drivers are made aware of the danger in a way they cannot fail to notice through a warning tone and LEDs projected into the windscreen."

ADAC had already tested various automatic speed and distance control systems in early 2010. That time a Volvo XC60 was under test. Volvo emerged as the clear victor in that test too. ADAC's testers praised the emphasis on accident avoidance in the Volvo system.

"ADAC has systematically gone through collision situations that are the most important in real traffic, for both warning functions and emergency braking. ADAC has also tested difficult situations where the systems are not supposed to give warning and then weighed that in with the total results. The tests selected by ADAC are similar to those we ourselves identified as the most important during system development. So the strenghts of our V60 comes through very well in the result," says Jonas Ekmark, Active Safety, Volvo Car Corporation.

Volvo Car Corporation's emergency brake assist systems
The Volvo City Safety System helps in completely avoiding collisions at low speed or at least substantially mitigating the consequences. City Safety works with an laser sensor in the upper portion of the windscreen, responds to vehicles at a distance of up to six metres and is active at speeds of between 4 and 30 km/h. If the system establishes that there is a danger of collision when the car in front performs a sudden braking manoeuvre or because of a stationary vehicle, the car's own brake system swings into action. If the driver fails to respond to the danger situation, emergency braking is automatically initiated with a deceleration between 50 and 100 percent of the available brake friction force.

The Adapative Cruise Control system automatically adapts speed and the distance from the vehicle ahead, defined by the driver himself. The system receives the necessary data from a radar sensor installed between the radiator grille (76 GHz unit, dual mode) and a computer vision camera, which is fitted between the interior mirror and windscreen.

"Collision Warning with Full Auto Brake and Pedestrian Detection" is active from a speed of 4 km/h to maximum speed (including when cruise control is deactivated) and warns the driver if there is collision risk with another vehicle or a pedestrian. The distances detected are 120 metres for vehicles travelling in the same direction and 65 metres for stationary vehicles. If the driver fails to respond and a collision is imminent, full braking is automatically activated in order to avoid the collision or to reduce the consequences of the collision as far as possible. Full braking takes place into the ABS control range with a deceleration of up to 100 % of the available brake friction force. All these features are available through the "Driver Support" package which is available as an option for the Volvo S60, Volvo V60, Volvo XC60, Volvo XC70, Volvo V70 and Volvo S80 models.

Check the test film at ADAC:

Keywords:
Safety, Awards
Descriptions and facts in this press material relate to Volvo Cars' international car range. Described features might be optional. Vehicle specifications may vary from one country to another and may be altered without prior notification.
Media Contacts
Related Images
May 18, 2011 ID: 38074 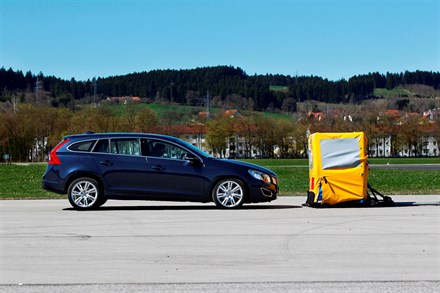 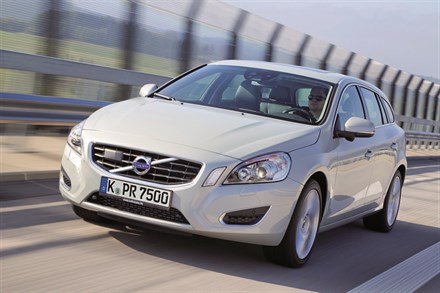