The WTCC season is on for Polestar Racing

After months of preparations, Polestar Racing and Robert Dahlgren kicked off the evaluation season in the FIA World Touring Car Championship at Curitiba, Brazil, this weekend.

"We are satisfied with the premiere, it has met our expectations and it feels encouraging for the continuation of the season," said Christian Dahl, Managing Director of Polestar Racing.

The race in Brazil was the first of eleven WTCC races for Polestar Racing this season.

"Before this weekend, Curitiba was just a point on the map for us. Now we go home with one gigabyte of data and a lot more experience. The development work will benefit" said Dahl.

The team starts the 2011 season with a two litre naturally aspirated engine. A switch to a newly developed 1.6 turbo engine is going to take place at mid-season. The power difference compared to the competitors' new turbo engines for this season was especially clear at Curitiba, a track that is located 1000 meters above sea level.

"Our calculations show that we lose about nine tenths per lap compared to the turbo engines at this altitude. But keeping in mind how close we were to the top of the field, it shows that our development work with the chassis during the winter has paid off," said Dahl.

Dahlgren beat the pole position time from last year in the qualifying session and was just four hundreds of a second from going on to the second qualifying round. He went on to finish race one as 12:th and race two as 13:th.

"We look forward to the next race with confidence. We know that we have a strong concept and the development of our new turbo engine progresses nicely. We have learned a lot during these days and that was our plan," said Dahl.

WTCC continues in Europe in five weeks at Zolder in Belgium. For more information, log in to http://www.volvopolestarracing.com/

Keywords:
Events/Activities, Special Interests
Descriptions and facts in this press material relate to Volvo Cars' international car range. Described features might be optional. Vehicle specifications may vary from one country to another and may be altered without prior notification.
Related Images
Mar 20, 2011 ID: 37246 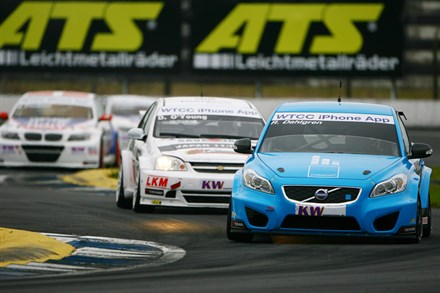