The 17th staging of China's oldest professional golf event, the Volvo China Open moves to a new and iconic destination with an advantageous new date, and a 20% increase in the prize fund certain to attract many of the leading players from Europe, Asia and further afield. The 2011 Volvo China Open will take place between 21st - 24th April 2011.

Ever since it was inaugurated back in 1995, the long-term aim of the Volvo China Open was to grow organically into Asia's first ‘Major' championship and that vision came three steps closer today following a major announcement concerning China's most historic and evocative golf championship.

First, the 2011 Volvo China Open will be staged at the magnificent Luxehills International Country Club in the historic city of Chengdu in Sichuan Province, south west China.

The third key component in enabling the Volvo China Open to take a major step forward towards its ambitious goal is a 20% increase in the prize fund, to RMB 20 million (Approx. US$ 3million), with a record first prize of RMB 3.3 million, which converts to half-a-million US dollars.

Commenting on three important developments, Per Ericsson, President, Volvo Event Management - Golf said, "These are three major building blocks in the next stage of our vision for the Volvo China Open and takes the national open golf championship of China, golf's fastest-growing market onto a new level of prestige and significance in the world of golf."

He continued, "Having secured a crucial week in the golf calendar and with a more relaxed travelling schedule for the top players coming from the seasons first Major, the US Masters at Augusta, I am confident that another vital step has been taken towards the long term success of the Volvo China Open. Furthermore, the fact that the Volvo China Open is offering the second largest prize fund on the European Tour spring schedule, will ensure that the cream of European and Asian golfers will be attracted to the Volvo China Open, which is already the most prestigious open championship in Asia."

Chinese number-one Liang Wen-chong, already a course winner when he claimed the RMB 6.6million (Approx. US$ 1 million) Luxehills Chengdu Open in 2010 is delighted that his national open golf championship is to be staged at a course he knows well.

"This is fantastic news," said the 32-year-old from Zhongshan, adding, "Luxehills International Country Club is a great layout, very challenging but very fair."

He concluded, "Ever since I turned professional in 1999, I have dreamed of following in the footsteps of my friend, mentor and countryman Zhang Lian-wei by winning my national open golf championship and although the US$500,000 first prize will attract some of the best golfers in the world, I will be doing my utmost to try to make it a home win."

Unsurprisingly, the China Golf Association is also delighted with Volvo's ongoing ambitions for and investment in the Volvo China Open.

"We have all shared in the vision and worked extremely hard to take the Volvo China Open to the next level," said Zhang Xiao-ning, Vice President & Secretary General of China Golf Association, explaining, "With golf in the Olympics in 2016, we envisage a huge rise in popularity of golf in China and feel sure that the move to Luxehills in Chengdu will inspire many youngsters there and throughout China and set them on the path towards enjoying the great game of golf."

He continued, "We are also confident that the work we have done together with Volvo, especially the new date and enhanced prize money will encourage more of the world's top players to come and take part in China's national open golf championship, which promised to be an exciting world class event to watch, whether on course or on TV."

Luxehills International Country Club, designed by Mark Hollinger for the internationally- renowned JMP Design will be, at 7,335-yards and Par-72, a true test of golf; opened in 2007, it is a visually stunning parkland layout with dramatic rock outcrops, in China's ‘Gateway' city of Chengdu. In the 2009-2010 China Golf Course Awards the club had the distinction of being recognized as one of the Top 10 golf courses in China.

CB Fong, General Manager of Luxehills, said, "The links between Chengdu and Europe have been growing steadily over the past few years, so it is highly appropriate to bring one of the European Tour's most prestigious events and some of the world's best players here to Luxehills."

He added, "It is the dream of every golf club in China to have the opportunity to host our national open golf championship, and our members are certainly to be very excited by this news," concluding, "Luxehills is one of the best golf facilities in the country and we know that everyone who attends, players, sponsors and members of the media will be afforded a very warm welcome."

Meanwhile, in keeping with every true open golf championship around the world, the Volvo China Open Qualifying events get underway next month, with four qualifying events, Southern China, Mid China and Northern China and an International qualifier to be staged in Hong Kong.

The 17th Volvo China Open will be staged under the auspices of the China Golf Association and co-sanctioned by the European Tour and OneAsia.

Keywords:
Special Interests, Sponsorship
Descriptions and facts in this press material relate to Volvo Cars' international car range. Described features might be optional. Vehicle specifications may vary from one country to another and may be altered without prior notification.
Media Contacts
Related Images
Apr 19, 2010 ID: 32338 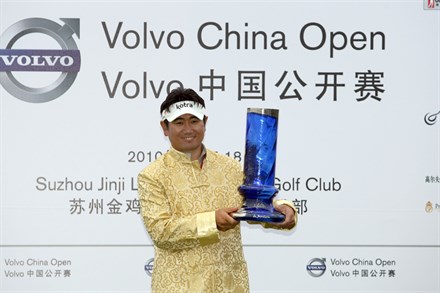