The exciting EU SARTRE project has now been running for a year. Its purpose is to develop, test and validate technology for vehicles that can drive themselves in long road trains on motorways. The SARTRE team is currently aiming at carry out the first development tests of a single lead and following vehicle before the end of 2010. Released today is a documentary film describing the first year's work of this multi-partner research initiative.

Most of the first year has been busy with the concept phase, which has involved the seven partner consortium investigating the basic principles of a feasible platooning system. Issues investigated have included usage cases, human factors and behaviours associated with platooning, core system parameters, and specification of prototype architecture and applications. In addition to providing some highly thought-provoking and useful results in its own right, this essential groundwork has enabled the team to move on to the start of the implementation phase which will see the start of vehicle testing.

The SARTRE team is currently aiming to carry out the first development tests of a single lead and following vehicle before the end of 2010. This first iteration of the SARTRE architecture will involve installation of the necessary hardware into the two vehicles, implementation of vehicle- to-vehicle communications, incorporation and integration of sensors, and low level actuator and lateral and longitudinal control of the following vehicle. The crucial software integration needed for driving automation has already commenced, and the first tests of a two vehicle train are expected to take place before the end of December. Subsequent phases of the work to be carried out in 2011 and early 2012 will see the concept demonstrated on a five-vehicle road train with strategies handling interaction with other road users.

In the eight minutes long documentary, available via the SARTRE web site (http://www.sartre-project.eu/, www.youtube.com/volvocarsnews  and http://www.media.volvocars.com/ ) a range of interviews are provided by key participants and stakeholders in the project.

In addition to describing the SARTRE concept in detail, the film shows some of the simulator-based testing at Tecnalia, Bilbao, Spain, in which human factors in the implementation of road train technology have been investigated. A sample group of men and women of varying ages and driving experience were tested in the simulator, which provides a 120 degree forward field of view via two LCD screens through which a total length of 18km of virtual motorway can be driven. The simulator incorporates a steering wheel with force feedback, realistic manual/automatic transmission controls and a haptic seat installation which, together, provide a highly realistic virtual driving environment.

This simulation work has enabled the team to assess in detail the response of drivers both while participating in road trains and while driving independently in an environment in which road trains are operating. Further coverage is shown of some of the sensor and actuator development work and of the control architecture design that will support the implementation phase over the coming months.

The partners have also published three technical papers, covering specific details of the work of the concept phase, at the ITS World Congress held in October at Busan, Korea. These papers - which are also available on the SARTRE web site (http://www.sartre-project.eu/) - have respectively covered the subjects of the challenges of platooning on public highways, an overview of the approach to the development of platooning being taken by the SARTRE project, and the human factors challenges of implementing such a dual mode transportation system.

"The SARTRE documentary film and the technical papers delivered at the ITS World Congress provide an extremely useful insight into the project for those interested in the potential for road train technology," explains Tom Robinson, SARTRE project coordinator of Ricardo UK Ltd. "SARTRE is really pushing the boundaries in this aspect of ITS technology and is already providing some extremely useful and actionable results. We now look forward to the next stage of the work of the project which will see vehicle tests, initially of just of a single vehicle for sensor, actuator and control system validation, then of a two vehicle platoon later this year and subsequently through the remainder of the project, a multiple vehicle platoon in order to test, develop, validate and identify remaining implementation issues for the entire SARTRE system."

NOTES TO EDITORS
About the SARTRE project:
The SARTRE project stands for Safe Road Trains for the Environment. Part-funded by the European Commission under the Framework 7 programme, SARTRE is led by Ricardo UK Ltd and comprises collaboration between the following additional participating companies: Idiada and Robotiker-Tecnalia of Spain, Institut für Kraftfahrwesen Aachen (IKA) of Germany, and SP Technical Research Institute of Sweden, Volvo Car Corporation and Volvo Technology of Sweden.

SARTRE aims to encourage a step change in personal transport usage through the development of safe environmental road trains (platoons). Systems are being developed in prototype form that will facilitate the safe adoption of road trains on un-modified public highways with full interaction with non-platoon vehicles.
The project is addressing the three cornerstone transportation issues of environment, safety and congestion while at the same time encouraging driver acceptance through the prospect of increased "driver comfort".

The objectives of SARTRE may be summarised as:
1. To define a set of acceptable platooning strategies that will allow road trains to operate on public highways without changes to the road and roadside infrastructure.
2. To enhance, develop and integrate technologies for a prototype platooning system such that the defined strategies can be assessed under real world scenarios.
3. To demonstrate how the use of platoons can lead to environmental, safety and congestion improvements.
4. To illustrate how a new business model can be used to encourage the use of platoons with benefits to both lead vehicle operators and to platoon subscribers.

If successful, the benefits from SARTRE are expected to be significant. The estimated fuel consumption saving for high speed highway operation of road trains is in the region of 20 percent depending on vehicle spacing and geometry. Safety benefits will arise from the reduction of accidents caused by driver action and driver fatigue. The utilization of existing road capacity will also be increased with a potential consequential reduction in journey times. For users of the technology, the practical attractions of a smoother, more predicable and lower cost journey which offers the opportunity of additional free time will be considerable. The SARTRE project formally started in September 2009 and will run for a total of three years. http://www.sartre-project.eu/

About the SARTRE project partners:

SP Technical Research Institute of Sweden is a leading international research institute. We work closely with our customers to create value, delivering high-quality input in all parts of the innovation chain, and thus playing an important part in assisting the competitiveness of industry and its evolution towards sustainable development.

The Robotiker-Tecnalia Technology Centre is an all-round supplier of contracted R+D+I, which has a complete range of services and products ranging from foresight and technology surveillance to new technology based business launching. Of this wide range of methods for collaborating with companies, development of R&D projects and technology consultancy services stand out. Robotiker-Tecnalia operates in its reference markets through five business units: ENERGY, TELECOM, AUTOMOTIVE, INFOTECH and INNOVA. This helps the technology centre to specialise by orienting research towards the needs of companies in these key sectors. Its mainly objective is to actively contribute to sustainable development in Society through Research and Technological Transfer. Over the years Robotiker-Tecnalia has taken part in more than 85 European projects, 24 of which remain ongoing. http://www.robotiker.com/

Volvo Technology Corporation is a Business Unit of the Volvo Group, which is one of the world's leading manufacturers of commercial transport solutions providing products such as trucks, buses, construction equipment, drive systems for marine and industrial applications as well as aircraft engine components. Founded in 1927, Volvo today has about 100,000 employees, production in 19 countries and operates on more than 180 markets. Volvo Technology Corporation is an innovation company that on contract basis invents researches, develops and integrates new product and business concepts and technology for hard as well as soft products within the transport and vehicle industry. Volvo Technologies primary customers are the Volvo Group Business Areas & Units. In addition, Volvo Technology participates in national and international projects in certain strategic areas, organised in common research programmes. For more information see http://www.tech.volvo.com/

Applus+ IDIADA, as a global partner to the automotive industry, provides complete solutions for automotive development projects worldwide. Applus+ IDIADA's Technical Centre is located 70 km south of Barcelona (Spain), having subsidiaries and branch offices in 16 European and Asian countries with a total work force of around 1000 employees. The core services Applus+ IDIADA provides are: Engineering, Proving Ground and Homologation. Main fields of engineering activity are power train, emissions, noise & vibration, vehicle dynamics, braking systems, fatigue & durability and passive safety. Applus+ IDIADA's proving ground is recognised as one of the best facilities in the world, and is renowned for the quality of its costumer service. As a multi-user facility, safety and confidentiality are of the highest priority. Weather conditions make this facility the first choice regardless of the type of testing.

The Institut für Kraftfahrzeuge of the RWTH Aachen University (ika) with its centennial history is engaged in education and in industry-orientated research on vehicles - e.g. cars, commercial vehicles, busses and motorcycles - as well as neighbouring issues such as traffic and environmental conditions (noise, exhaust gas, etc.). ika is headed by Univ.-Prof. Dr.- Ing. Lutz Eckstein. In 2009 ika had more than 200 employees. IKA increasingly links research projects with development tasks that have to be financed by third-party funding. ika´s activities are tailored to industrial demands and comprise the departments: Chassis - Body - Drive train - Acoustics - Electronics - Driver Assistance - Strategy and Process Development. The Driver Assistance department focuses on the development and assessment of driver assistance systems. Since the first introduction of advanced driver assistant systems (ADAS) ika has been one of the leading test facilities for independent tests and certifications of the system's components and overall applications.

Volvo Car Corporation is one of the car industry's strongest brands, with a long and proud history of world-leading innovations. Volvo sells around 400.000 cars per year in about 120 countries and comprising some 2,000 sales outlets and service workshops around the world. Volvo Car Corporation's headquarter and other corporate functions are based in Gothenburg, Sweden. For more information, please check http://www.volvocars.com/

Keywords:
Corporate News, Product News
Descriptions and facts in this press material relate to Volvo Cars' international car range. Described features might be optional. Vehicle specifications may vary from one country to another and may be altered without prior notification.
To view the full copyright information click here
Media Contacts
Related Images
Oct 22, 2009 ID: 30936 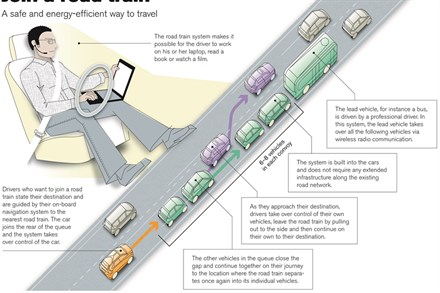 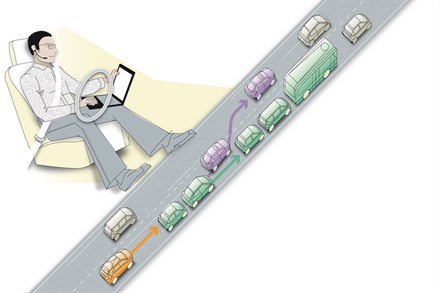 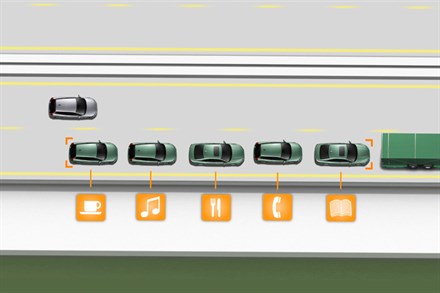 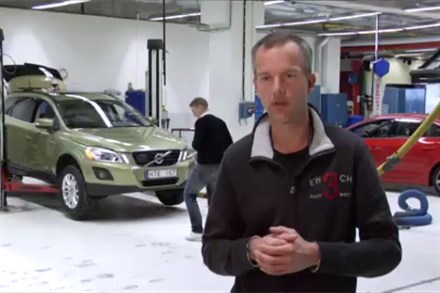 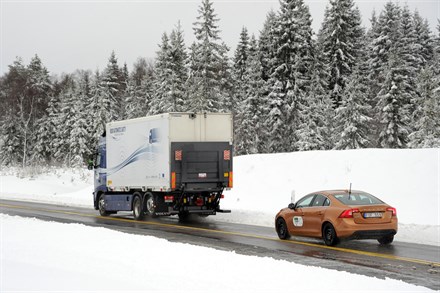