As of the end of November 2010, the Volvo XC60 can be specified with the new Pedestrian Detection with Full Auto Brake safety system.
At the same time, the XC60 gets the new infotainment system that has been introduced in the Volvo S60 and V60. All the information is presented in a five or seven inch colour screen integrated into the upper part of the centre console.

The new four-cylinder direct-injection 1.6- and 2-litre GTDi engines are now beginning to make their entry throughout the entire Volvo Cars' model range.

Pedestrian Detection with Full Auto Brake, which was introduced in the new Volvo S60 and V60, is now also available in the Volvo XC60. This is a support function that helps the driver detect potentially dangerous situations and can actively help avoid the nightmare scenario of colliding with a pedestrian.
Pedestrian collisions occur on a daily basis in the increasingly intensive traffic environment. For instance, 16 percent of all those killed in traffic in Sweden are pedestrians. The corresponding figure for the USA is 11 percent, Germany is at 13 percent and in China the figure is as high as up to 25 percent.

First a warning, then full braking power
Pedestrian Detection with Full Auto Brake uses radar and camera technology to watch out for pedestrians in front of the car. The main purpose of the initial warning is to alert the driver so he or she can brake or steer out of the way. If the driver does not respond to the warning, the car automatically brakes with full force moments before the collision becomes unavoidable. With automatic braking, collisions can in certain circumstances be avoided at speeds of up to 35 km/h.

It is estimated that if all cars were fitted with Pedestrian Detection with Full Auto Brake the number of pedestrians killed would be able to be reduced by more than 20 percent. The corresponding figure for serious injuries is almost 30 percent. In three cases out of ten, the collision may be able to be entirely avoided. The estimates are based on pedestrians being hit by the front of the car.

Can also avoid rear-end impacts
The collision warning system is also programmed to react if the vehicle in front is at a standstill or is moving in the same direction as one's own car. In certain situations, a collision may be avoided if the speed difference between the two vehicles is below 35 km/h. The technology is active in all speeds.

In the comfort stakes, the Volvo XC60 with automatic transmission is now available with the latest version of Adaptive Cruise Control (ACC), which automatically helps maintain a pre-set gap to the vehicle in front. New is that this works also when driving in slow-moving traffic, all the way down to standstill. The car accelerates automatically when the traffic gets moving again.

A camera in the grille with a 180 degree field of vision is one new feature in the XC60's accessories range. This camera is a significant asset in road junctions with limited visibility and also when parking. The view from the camera is presented in a screen integrated into the centre console.

Same infotainment system as the S60 and V60
The Volvo XC60 is also being upgraded with an entirely new infotainment system where information from the audio system, navigation unit, mobile phone and other functions is presented in a five-inch or seven-inch colour screen in the upper part of the centre console. This screen is positioned high up in the driver's field of vision to make it easy to keep his or her eyes safely on the road.
All the functions can be operated via buttons built into the steering wheel or controls positioned immediately below the colour screen. In addition, there is a separate remote control.
At the same time, the XC60 gets the same type of centre stack and the same range of audio units as recently introduced in the Volvo S60 and V60.

The most advanced audio unit, Premium Sound, has a Class D digital 5x130W amplifier with circuits from Swedish experts Anaview, Dolby Digital in combination with Dolby Pro Logic II Surround, the latest MultEQ from Audyssey Laboratories and 12 loudspeakers.
In addition to Premium Sound, which comes with a seven-inch screen, there are three other audio systems to choose between.

The T5 is also available with a six-speed manual gearbox in the Volvo S80, V70, S60 and V60.
"We have succeeded in making a four-cylinder engine that is as powerful as a 2.5-litre five-cylinder unit - but much more energy-efficient. This is a welcome development both for the environment and for those customers who want high performance and good driveability. One of the most important explanations behind the result is our patented new turbo system which has been tailor-made for smaller, more energy-efficient engines," says Paul Welander, acting Senior Vice President Product Development at Volvo Cars.

Two new 1.6-litre GTDi engines
Two versions of a new 1.6-litre GTDi engine are also being introduced: the T4 with 180 horsepower and the T3 which produces 150 horsepower. Torque in both versions is 240 Nm, and both engines offer excellent pulling power throughout the speed range. The torque curve is relatively gentle, which promotes a particularly comfortable driving experience.

In the S60 and V60 both transmission variants have a DRIVe button in the instrument panel to switch the fuel-saving functions off and on:
Powershift comes with a new function that disengages drive when the driver lets the car coast with the accelerator fully released. This reduces rolling resistance and helps cut fuel consumption. In cars with the manual gearbox, it is the start/stop function that is controlled by the DRIVe button.

Both engines are certified according to the Euro 5 standards. 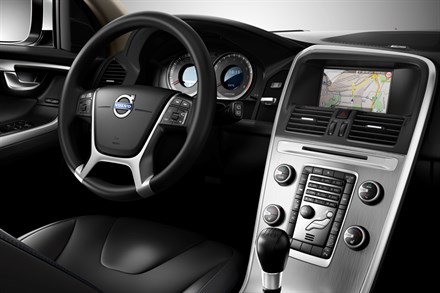 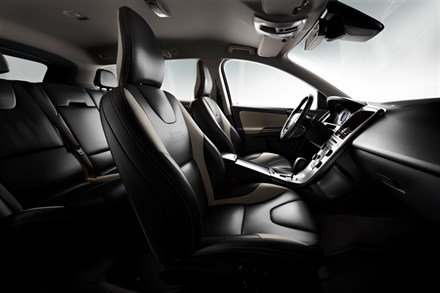