See the film clip from the weekend's race: http://www.youtube.com/watch?v=bOk76tzxZy4

In front of over 30,000 spectators at Mantorp Park, Volvo and Polestar secured the 2010 STCC Team Championship title after a must-do win through Tommy Rustad in the second heat. Robert Dahlgren made the podium too with a second place finish in the first heat. This was enough to put Dahlgren in an overall second place in this year's STCC driver's championship to go along with his Scandinavian title for drivers he claimed just two weeks ago.

Four out of five possible titles the last two years

The ethanol powered Volvo C30 DRIVe STCC car has now secured the top spot as Volvos most successful race car to date. Developed locally with Polestar, the car begun claiming poles and victories already in its maiden season in 2008. In the last two STCC-seasons, the car has claimed 70% of all poles, 40% of all race wins, two STCC Team titles, one STCC Drivers title and one Scandinavian Drivers title.

"This is a very proud moment for everyone at Volvo and Polestar. We have achieved this because the C30 is a very good car to begin with and because we have worked as a team and kept pushing forward both when challenged and when successful" said Derek Crabb, Volvo Cars Motorsport Director.

Volvo and Polestar are now busy preparing for next season which actually starts in less than a month. Polestar will participate in the World Touring Car Championship in Okayama, Japan on October 31. This race is an introduction to the full 2011 WTCC season Volvo recently requested Polestar to do in order to evaluate the series. Parallel, Volvo and Polestar is also set to defend and chase new STCC titles in 2011.

Keywords:
Special Interests, Sponsorship
Descriptions and facts in this press material relate to Volvo Cars' international car range. Described features might be optional. Vehicle specifications may vary from one country to another and may be altered without prior notification.
Media Contacts
Related Images
Oct 03, 2010 ID: 35232 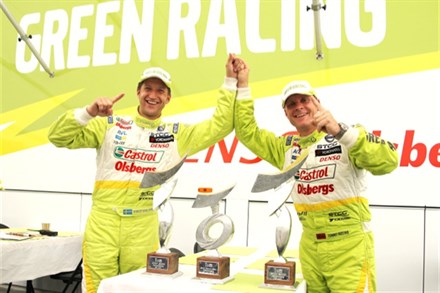