Now he is a member of the club for survivors

When the fire team arrived on the scene, they thought the crash appeared unsurvivable. But Marcus Mendoza had defied death. He was driving a Volvo.
Now Marcus is a member of the Volvo Saved My Life Club.

On the first of September last year, Marcus Mendoza from Camarillo - a small community close to Los Angeles, California - was out driving his 1999 Volvo S70. Owned from new by his grandmother, Marcus had taken over the ownership of it not long before. He was just 17 years old at the time.

"We wanted Marcus to have a safe car, that's why we made the choice to get a Volvo," says Marcus's father, Fernando Mendoza.

A safe car, but luck was not with Marcus in full measure as he moved off, perfectly normally, from a stop sign that day. Another car came racing up from behind at high speed, shunting Marcus's Volvo into a nearby tree.

It looked like more than just an insurance write-off to the firemen who attended the accident. To them, it looked like a fatal accident. It took them 20 minutes to cut open the car and get Marcus out of it.

Broke leg, arm and nose
He had broken his nose, his left leg and his left arm. He had multiple cuts and abrasions. But he had survived.

"I remember I had just left a stop sign. The car started moving, then everything went black," says Marcus.

His parents, Fernando and Diane Mendoza, rushed to the hospital when they heard their son had been in a serious accident. There he was, stretched out on a hospital bed, still covered in blood and with fragments of glass all over his body.

"My heart just sank when I saw my child in that situation. And then he immediately started apologising about the car being wrecked!" says Fernando Mendoza.

Marcus was off school recovering for eight weeks. The rescue team who cut him out of his car were convinced that he had only come through it alive thanks to Volvo Cars.

"They said he survived because he was in a Volvo," says Fernando Mendoza.

Wrote letter to thank Volvo Cars
Fernando felt moved to sit down and write to Volvo Car Corporation. It was a truly heartfelt letter, in which he paid tribute to all the decades of work on safety at Volvo Cars and all the clever engineers in the company.

Fernando Mendoza was recommended to apply for a membership for Marcus in Volvo Saved My Life Club. It is an organisation for customers who have defied death in a serious accident and clearly attribute their survival to the Volvo brand.

The club was founded at the New York Auto Show in 1990. This year it celebrates its 20-year anniversary. Marcus Mendoza was chosen as a member and is just one out of some 1,500 members across the United States.

New members of the Volvo Saved My Life Club are sent a certificate of membership, a Volvo designed picture frame for family photos and a personal letter from Doug Speck, President and CEO of Volvo Cars of North America (VCNA). For legal reasons, all applicants for membership are asked to give their permission for Volvo Cars to publish their story and personal account of what happened.

VCNA publishes some of their stories on the Internet, and some in a printed book. These family-oriented articles include photos of the lucky survivors, and the generally grim-looking car wrecks they were rescued from. The third Volvo Saved My Life book edition was published earlier this year.

But what happened to Marcus Mendoza?

Life is good - and very precious.

Keywords:
Safety, Special Interests
Descriptions and facts in this press material relate to Volvo Cars' international car range. Described features might be optional. Vehicle specifications may vary from one country to another and may be altered without prior notification.
Media Contacts
Related Images
Jul 13, 2010 ID: 33399 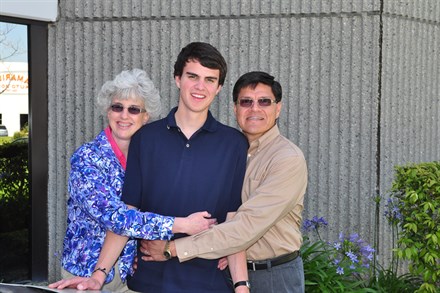 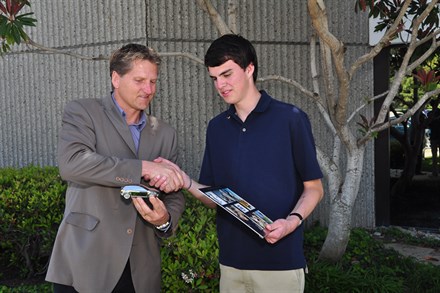