A sunny and dry Karlskoga Motorstadion offered early summer heat for the racing teams in STCC. After fast qualifying laps, Robert Dahlgren claimed a second place on the grid which meant a risky outer line in the start corner. But with the same experience from Knutstorp two weeks ago, Robert managed to defend his position in the start and held it throughout the finish line.

"It went really well. For me, this feels like a victory. I owe a lot to the car, it has real punch on the straights" says a satisfied Robert Dahlgren who drove as fast as the best BMW-competitors on this track - STCC:s most difficult track for regulation conforming front wheel drive cars.

Tommy Rustad had a tight first heat, with two minor clashes where one of them resulted in a time penalty which moved him down from a fourth to a ninth place finish.
"It was a misjudgment. Thed went on his brakes harder than I expected while I was trying to slot in right behind him. We touched and he went off" Rustad explains.

Heat two was even tighter for the two Volvo Polestar drivers. Starting in the middle of the field and with few overtaking spots, Dahlgren finished in eighth place and Rustad in tenth.

"This season starts with three away games; three narrow twisty tracks in a row - Jyllandsringen, Knutstorp and Karlskoga. We are very satisfied with being in the lead at this stage of the season" says team manager Christian Dahl.

Next race is on June 5, and on Volvo Polestar's home turf - Gothenburg City Race Arena.

See the film clip from the weekends' STCC race: http://www.youtube.com/watch?v=_FDQ0cZvm3Y

Keywords:
Special Interests, Sponsorship
Descriptions and facts in this press material relate to Volvo Cars' international car range. Described features might be optional. Vehicle specifications may vary from one country to another and may be altered without prior notification.
Media Contacts
Related Images
May 23, 2010 ID: 32746 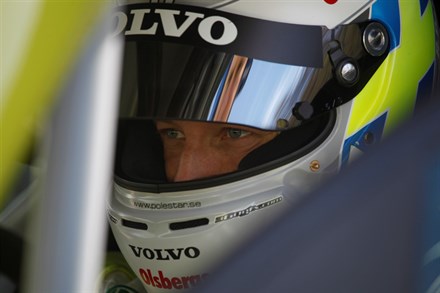 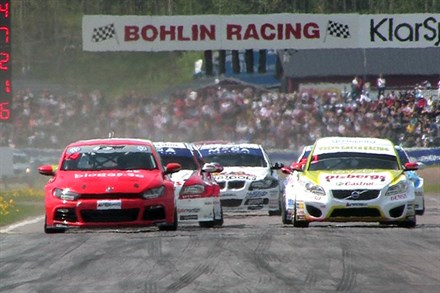