Two second places for Volvo in this weekend's STCC

Two second places for Volvo in this weekend's STCC

It was a good weekend for Volvo Polestar and driver Robert Dahlgren, who took many important points by claiming two second places in this weekend's Swedish Touring Car Championship (STCC) round at Ring Knutstorp. Continued top spot in both driver's and team championships bodes well for the rest of the season.

In spite of very difficult conditions on a wet and cold Ring Knutstorp, Volvo Polestar claimed enough points to remain in the lead in both the driver's and team championship. With a compromise setup between wet and dry conditions, Robert finished second in both heats, just a few meters short of victory in the second one.

"On a day like this, we can only be happy with the results, pack up and go to the next race" says Alexander Murdzevski Schedvin at Volvo Motorsport.

Robert Dahlgren impressed in heat two by advancing his ethanol-fueled Volvo C30 DRIVe race car from seventh to second place in just a few laps. Although under pressure from his competitors in BMW later in the heat, Dahlgren drove smart and defended his position.

"I am very happy with the outcome" says a Robert Dahlgren who tops the driver's championship.

It was worse for Tommy Rustad who has had a tough start to the season with the exception of his win in the first heat in the premiere race in Denmark two weeks ago. At nearly 150 kilometers per hour, he went off the track in heat one after receiving an accidental nudge from BMW driver Jan Nilsson.

"I had the ideal line and Jan wanted the same, he touched me and I spun off the track", said Tommy Rustad. Tommy was unhurt in the crash but very disappointed as his car was beyond repair for the second heat.

The second round of this year's STCC is completed and the hunt for new championship titles is intensifying. The overall points score for Robert Dahlgren and Volvo Polestar this weekend means continued top spot in the driver's championship and an extended lead in the team championship.

STCC Driver's Championship 2010 after 2 of 9 rounds

STCC Team Championship 2010 after 2 of 9 rounds

Keywords:
Special Interests, Sponsorship
Descriptions and facts in this press material relate to Volvo Cars' international car range. Described features might be optional. Vehicle specifications may vary from one country to another and may be altered without prior notification.
Media Contacts
Related Images
May 09, 2010 ID: 32625 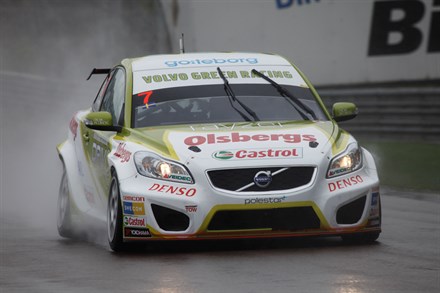 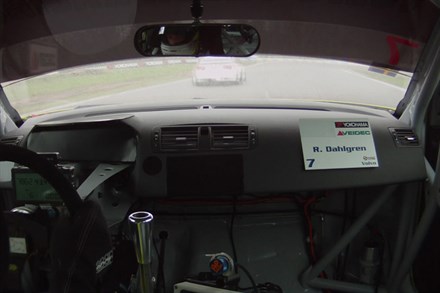