Victory in both race heats in the STCC premiere

- Volvo Polestar and Dahlgren lead the team and driver's championships

The season's first STCC race took place at Jyllandsringen in Denmark, a track that is very winding and narrow and therefore favor rear-wheel drive cars. Despite this fact, the defending champions Volvo Polestar managed to start something that hopefully will be a rerun of the last year's consecutive series of victories. Tommy Rustad won the first heat and Robert Dahlgren the second. That puts Dahlgren in top of the driver's championship, and Volvo Polestar on top in the team championship.

Volvo is in the lead at both tables after the first STCC round, where Robert Dahlgren and Tommy Rustad started with an incredible weekend.

"It's been a fantastic day. We are pleased to deliver this to the team and Volvo who has spent an endless amount of work during the preseason" said Robert Dahlgren, leading the driver's championship after a fierce battle among the 24 participating cars.

Tommy Rustad, driving the other Volvo showed his speed already in qualifying, and took his first pole position for the season. Unfortunately, Rustad was forced to retire in the second race heat seven laps in after being hit by Thed Björk who attempted a late overtaking maneuver. In spite of this the standings look good, and team manager Christian Dahl is very satisfied with the weekend.

"A super-start to the season! Rustad had an incredible race in the first heat and managed to keep the competition behind him lap after lap, and Dahlgren did a really good start in the second heat and could then sail away to an easy win".

The first round of the season is completed. Two wins and one pole position means Volvo has now claimed its fourth consecutive race win and twelfth consecutive pole position - Volvo Polestar has been quickest in all qualifying sessions in STCC from the second to last race of the 2008 season.

"This was better than expected, given that Jyllandsringen is this year's most difficult track for front wheel drive cars, concludes Derek Crabb, Volvo Cars Motorsport Director.

Keywords:
Special Interests, Sponsorship
Descriptions and facts in this press material relate to Volvo Cars' international car range. Described features might be optional. Vehicle specifications may vary from one country to another and may be altered without prior notification.
Media Contacts
Related Images
Apr 25, 2010 ID: 32463 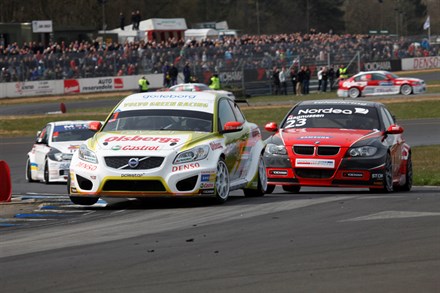 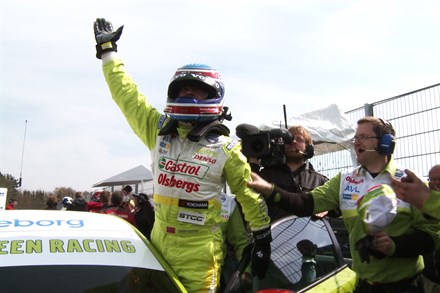