It was an intriguing opening day's play at the 2010 Volvo China Open, which ended with Thai star Thongchai Jaidee and Korean youngster Kim Do-hoon leading the field by two, both shooting an 8-under-par course record at Suzhou Jinji Lake International Golf Club.

The early starters appeared to enjoy the best of the tough conditions, with Spanish ace Pablo Larrazábal joining ‘home' favourite Liang Wenchong on six-under-par whilst the wind was down and the greens were in pristine condition.

But Thongchai Jaidee from Thailand, who missed last week's US Masters with an arm injury recovered well to blaze his way in cool conditions to a blistering 8-under-par 64, a course record for the Wetlands and Links configuration.

Playing in the marquee group alongside Ryder Cup captains Colin Montgomerie and Corey Pavin, the 40-year-old former paratrooper played flawless golf to sit proudly at the head of a world-class leaderboard.

"I was pleased with the way I played out there, almost perfect," said the 40-year-old, adding, "I enjoyed playing with both Ryder Cup captains and perhaps it inspired me?"

Meanwhile, Kim, playing in the final three-ball of the day matched Thongchai's course record, the 21-year-old's score his third 64 in recent weeks.

"I played very well," said the youngster, adding, "I admire KJ Choi and YE Yang and I want to do what they have done."

Liang Wenchong, who won the opening OneAsia event of the season also in China and Spaniard Larrazábal matched each other shot for shot to end the day tied on 6-under alongside late starter Jamie Donaldson of Wales.

Tucked in just a single shot back on five under is a group of four, including US Ryder Cup captain Pavin, the 50-year-old signing for a bogey-free 67, as did 2008 Volvo China Open champion Damien McGrane and his fellow Irishman Peter Lawrie.

"I was really pleased with that," said the 50-year-old Texan, adding, "I enjoyed playing with Colin and Thongchai who played really well."

Lurking dangerously a shot back are Swede Henrik Stenson and YE Yang of Korea, whilst flying Finn Mikko Ilonen also sits on 4-under, four off the lead.

Pavin's Ryder Cup opposite number Colin Montgomerie endured a rollercoaster round, ending-up on level par but on course to make the cut.

Meanwhile, the curse of the defending champions appears to have struck again as defending champion Scott Strange slumped to an opening round 76, 4-over-par and he will have to improve if he is to make the halfway cut.

All in all, 49 players, almost a third of the field broke par on a difficult day for scoring but possibly as good a round as Thongchai and Kim's 8-under was the 1-over 73 shot by 14-year-old qualifier Zhang Jin, an excellent effort from the young man from China.

With the pairings reversed for the second day, some excellent match-ups include Monty, Pavin and tournament leader Thongchai Jaidee, off at 7am, whilst Yang, Stenson and Scott Strange out just before midday, and co-leader Kim teeing-off at 08.30.

The halfway cut falls at the end of Friday's second round with the 2010 Volvo China Open champion crowned on Sunday afternoon.

Keywords:
Events/Activities, Special Interests, Sponsorship
Descriptions and facts in this press material relate to Volvo Cars' international car range. Described features might be optional. Vehicle specifications may vary from one country to another and may be altered without prior notification.
Media Contacts
Related Images
Apr 15, 2010 ID: 32324 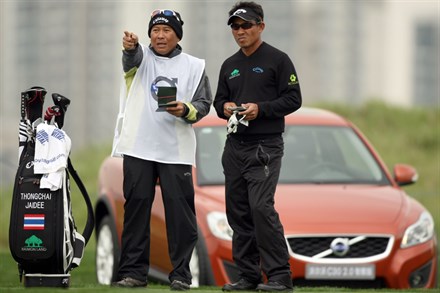 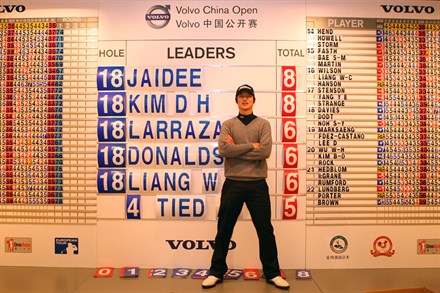