Herzogenaurach,Germany/Boston, Massachusetts - April, 2010 - PUMA® announced today it will participate in the Volvo Ocean Race 2011-12 after finishing second overall in the 2008-09 race, which ended in June 2009.  The PUMA Ocean Racing team will once again be under the leadership of skipper Ken Read.

PUMA continues to produce and expand their line of sailing performance gear and remains the first Sportlifestyle company to participate in a venture of this kind. PUMA will also be the Official Supplier of footwear, clothing and accessories to the Volvo Ocean Race.

"We are proud of PUMA Ocean Racing's success in the last Volvo Ocean Race and look forward to the adventures this next race will bring," said Jochen Zeitz, PUMA AG Chairman and CEO.

"Both the team and the company hope to leverage the key lessons from the last Volvo Ocean Race campaign in order to continue spreading the good will of the programme and PUMA worldwide. The Volvo Ocean Race is one of the world's iconic sporting events. It proved to be an extremely successful marketing tool for us and an important launch pad for the sailing product category.

"We look forward to building the sailing category even more throughout the next race, as well as expanding into other forms of outdoor lifestyle ventures," Zeitz concluded.

Knut Frostad, Volvo Ocean Race CEO added that PUMA Ocean Racing was a ground breaking team in the last Volvo Ocean Race, not only bringing a very competitive team, but the creativity of a world class fashion brand. Their funky attitude and design spoke to a young audience who engaged with both PUMA and the race.

PUMA is committed to working across the globe in sustainable, creative and innovative ways to lessen the impact on the environment and to give back what it takes from the planet by seeking to reduce its carbon footprint in all areas of business.  The sportlifestyle brand's entry into the Volvo Ocean Race is compatible with this mission as sailing is considered a ‘clean sport', using only the wind to harness the power needed to race across the world over the course of nine months.

For the 2011-12 race, PUMA Ocean Racing has proudly partnered with BERG Propulsion, one of the world's leading designers and producers of Controllable Pitch Propellers for commercial shipping. BERG Propulsion products are designed and engineered with the reduction of environmental impact in mind, striving to bring fuel savings and environmental benefits to every product.  This commitment to sustainability makes them a perfect partner for PUMA.   The team will be known as PUMA Ocean Racing, powered by BERG Propulsion.

"This is a key new ingredient to our campaign," stated Antonio Bertone, Chief Marketing Officer, PUMA AG.  "BERG Propulsion's CEO Hakan Svensson and his entire company are a perfect fit with our operation.  As a life long competitive sailor himself, Hakan understands the sport, the race and how BERG can utilise the race to help build and market their global company."

"We appreciate greatly BERG Propulsion, who has decided to join the race again after tasting it in the previous event and now they are playing in the upper league of sponsors," Frostad said.

Hakan Svensson, Berg Propulsion Chairman and CEO stated: "Our company is very excited to be a part of the Volvo Ocean Race this year and we are especially proud to have the opportunity to partner with PUMA.  We view the race as a perfect symbol for what Berg Propulsion represents: global perspective and reach, an emphasis on quality, reliability and a desire for excellence achieved through a strong TEAM spirit. Very much like the shipping industry, the Volvo Ocean Race is about performance on a global arena and this is directly applicable to our customer's situation, who are also out there 24/7 under very tough conditions.  We will do our absolute best to support Ken Read and his talented crew in their efforts to be the fastest around the world."

Team selection efforts are already underway and will likely include a number of sailors from PUMA's 2008-09 team, plus a mix of new and veteran talent from the professional racing world.  Training will begin onboard PUMA's il mostro in spring 2010 at the team's home base in Newport, Rhode Island.

Skipper Ken Read, considered to be one of the world's most accomplished racers, was in charge of PUMA Ocean Racing and at the helm of PUMA's il mostro throughout the entire Volvo Ocean Race 2008-09.  The US-born Read has twice helmed America's Cup programmes in 2000 and 2003, was named United States Rolex Yachtsman of the Year twice and has 46 World, North American and National Championships to his credit.

Commenting on the choice of skipper, Frostad said:  "It is great to have Ken Read and his team back, after their outstanding performance in the 2008-09 race and I am sure he is striving to achieve the ultimate goal."

"This last race was an amazing journey for me personally and for our start-up company PUMA Ocean Racing," said Ken Read.  "To have the opportunity to continue where we left off is a dream come true.  For PUMA to want to come back to this adventure is a testament to the event itself and to the entire PUMA Ocean Racing team past and present. We look forward to the challenges that lie ahead both organisationally as well as competitively."

The entry into competitive sailing extends PUMA's focus into premium lifestyle sports - a category PUMA has forged through its Formula 1 partnerships, motor sports collaborations such as Ducati and Ferrari, and the launch of a sportlifestyle golf collection in 2006.  PUMA will be the Official Supplier of footwear, clothing and accessories to the Volvo Ocean Race.

"We are really looking forward to developing the Volvo Ocean Race PUMA clothing, footwear and accessories line," Frostad said, adding that he hopes it will become an even more attractive brand for all the fans of the race.

About PUMA
PUMA is one of the world's leading sportlifestyle companies that designs and develops footwear, apparel and accessories.  It is committed to working in ways that contribute to the world by supporting Creativity, SAFE Sustainability and Peace, and by staying true to the principles of being Fair, Honest, Positive and Creative in decisions made and actions taken. PUMA starts in Sport and ends in Fashion. Its Sport Performance and Lifestyle labels include categories such as Football, Running, Motorsports, Golf and Sailing. Sport Fashion features collaborations with renowned designer labels such as Alexander McQueen, Mihara Yasuhiro and Sergio Rossi. The PUMA Group owns the brands PUMA and Tretorn. The company, which was founded in 1948, distributes its products in more than 120 countries, employs more than 9,000 people worldwide and has headquarters in Herzogenaurach/Germany, Boston, London and Hong Kong.
www.puma.com

About BERG PROPULSION
Berg Propulsion is one of the world's leading designers and producers of Controllable Pitch Propellers. Our strength lies in exceptional functional and technical expertise coupled with extensive industry knowledge. We deliver fully customized main propellers, azimuth thrusters, transverse thrusters and maneuver systems. Our operation is global - we provide our customers with speedy and effective service within 24 hours.
www.bergpropulsion.com

Keywords:
Special Interests, Sponsorship
Descriptions and facts in this press material relate to Volvo Cars' international car range. Described features might be optional. Vehicle specifications may vary from one country to another and may be altered without prior notification.
Media Contacts
Related Images
Sep 10, 2008 ID: 16914 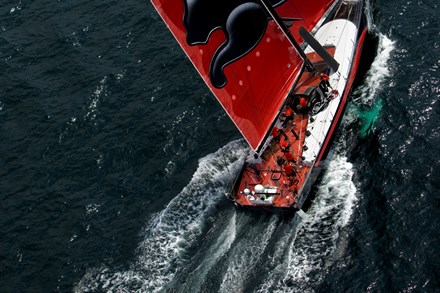 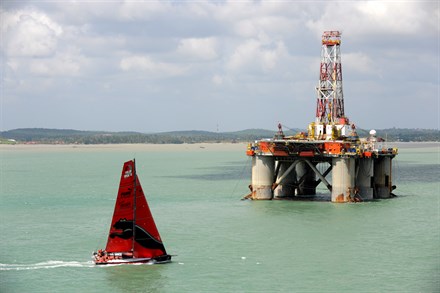