Miami, Florida, will host the start of the transatlantic leg to Lisbon, Portugal, for the Volvo Ocean Race 2011-12. Florida has a long association with the event, as this will be the fifth time the sunshine state has welcomed the world's premier offshore race.

Miami has successfully fought off tough competition from other North American ports, in its bid to win back the event it previously hosted in the 2001-02 edition of the race.  Miami will see the boats arrive after their charge north from the Brazilian port of Itajai.

"The Volvo Ocean Race is by far the world's premier global race. It's a great honour to have Miami selected as a featured stopover," said Commission Chairman Marc Sarnoff.

Volvo Ocean Race CEO, Knut Frostad, said, "We are very confident Miami will deliver a first class event for us in the spring of 2012 and the people of Florida will welcome us to their shores once again."

The race village will be located at Bicentennial Park, on the Biscayne Bay, in the heart of Downtown Miami. It is a 29-acre, open park which is suited for major events and has been used in the past for shows such as the Cirque Du Soleil.

American sailors have a victorious history in the race, with two winners of the US Sailing Rolex Yachtsman of the Year Award, John Kostecki and Paul Cayard, also winning the Volvo Ocean Race (2001-02) and Whitbread Round the World (1997-98). The 2008-09 race also saw fellow US Yachtsman of the Year, Ken Read snatch second place overall on PUMA on the penultimate leg of the race.

The remaining host ports will be revealed before the end of March.

Keywords:
Special Interests, Sponsorship
Descriptions and facts in this press material relate to Volvo Cars' international car range. Described features might be optional. Vehicle specifications may vary from one country to another and may be altered without prior notification.
Media Contacts
Related Images
Mar 25, 2010 ID: 32232 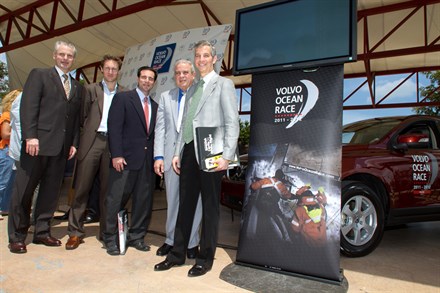