The city of Itajaí, in Brazil's southern state of Santa Catarina, will be the South American stopover for the 2011-12 Volvo Ocean Race. This is the first time that the port of Itajaí will play host to the event, which has visited Brazil on six prior occasions.

"It's an honour for our city to host such a glorious sailing event in our waters and represent Santa Catarina and Brazil in the Volvo Ocean Race, the most important ocean sailing competition in the world," said mayor Jandir Bellini.

The Volvo Ocean Race crews will have faced major challenges in the Southern Ocean, where icebergs, whales, huge waves and fiercely cold temperatures are common-place, Itajaí will be a great place for them to regain their strength before heading offshore once more.

"Itajaí is a nautical Garden of Eden and one of the reasons it was chosen as a stopover," explained State Governor Luiz Henrique da Silveira. "We are very proud to welcome the Volvo Ocean Race," he added.

Santa Catarina, is a State that has received a clutch of national awards for the best tourist destination in Brazil, will use the Volvo Ocean Race to demonstrate its ability to organise large-scale events. The Race Village will be situated in the port area, which is located on the mouth of the Itajaí-Acu River, near a large metropolitan area and close to the beach resort of Camboriú.

In 2005-06, Brazil's debut entry in the Volvo Ocean Race finished a creditable third place, crewed predominantly by Brazilian athletes. This was followed by success for Brazilian multiple Olympic medallist, Torben Grael, who drove Ericsson 4 to victory in 2008-09.

Knut Frostad, CEO of the Volvo Ocean Race, and team member of the 2005-06 Brasil 1 project, said, "We are pleased to confirm Itajaí's inclusion in our race around the world. After rounding Cape Horn, our racing teams will truly appreciate the warm welcome that Brazil is famous for, and it will be the perfect place for the crews to regain their strength after such a testing leg in the Southern Ocean."

The remaining host ports will be revealed before the end of March.

Keywords:
Special Interests, Sponsorship
Descriptions and facts in this press material relate to Volvo Cars' international car range. Described features might be optional. Vehicle specifications may vary from one country to another and may be altered without prior notification.
Media Contacts
Related Images
Mar 23, 2010 ID: 32159 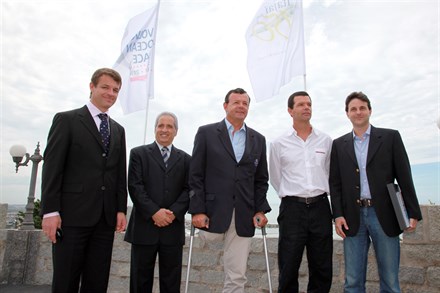